What's New
Multiply September Ukraine Updates
Volunteers in B.C. honour Leamington woman tragically killed...
Delete or not to delete, that is the...
Believers bring water for drought baptism
Encouragement to those in the arena
Keeping attention and making an impact: A few...
Open hands to reconciliation
From the editor
Approaching truth and reconciliation with love in our...
MB Seminary offers new MA in Transformational Leadership...
Home News Walking together for peace in Colombia 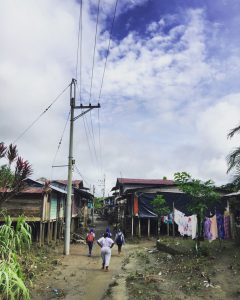 Members of the Colombian Mennonite Brethren Conference visit a rural community in the San Juan region shortly after the community experienced significant flooding. The community is currently stuck in the middle of violence between the Gaitanista Self Defence Forces of Colombia (AGC), a paramilitary group which occupies the area, and a guerrilla group vying for power. MCC photo/Brendah Ndagire

MCC partners in Colombia are walking with people affected by more than 50 years of violence, months after a peace accord was signed between the government and the country’s largest rebel group.

At the end of 2016, the government and the Revolutionary Armed Forces of Colombia (FARC-EP) guerrillas negotiated a deal in which the rebels agreed to leave their camps and relocate to a number of sites within the country. From there, the groups will disarm and begin new lives as civilians. Guerrillas not directly involved in war crimes will not face prison time.

Although the FARC-EP is demobilizing, there are many other illegal armed groups in the country and, according to Amy Eanes, the planning, monitoring, evaluation and reporting, delegations, and advocacy support specialist for MCC in Colombia, “there’s still a long journey toward peace.”

Eanes says some of these groups are becoming more active in order to assert dominance and claim territory once occupied by the FARC-EP.

This is especially true in rural areas like communities in the Chocó region of Colombia, where MCC partners with the Mennonite Brethren conference.

A member of one of the churches in the area, Maria Camila, whose real name isn’t being used to protect her identity, says another guerrilla group is fighting the Gaitanista Self Defence Forces of Colombia (AGC), a paramilitary group that normally occupies the area, and it’s very dangerous there now.

Armed conflict between the two groups broke out in February, months after the peace accord was signed by the FARC-EP.

“It sounded tremendous, like thunder, bullets being shot everywhere,” she recalls. In one part of the town, the guerrilla group threatened to shoot civilians if they didn’t open their doors because the guerrilla fighters believed members of the paramilitary group were hiding there.

“Even though you know that God says that wars will come and in the midst of all these things God will protect you, it was something so terrible because it’s one thing to talk about it, and it’s another thing to be there while it’s happening. To feel the shootout, to hear the sounds like something terrible was happening. I just said, ‘Lord have mercy on us and watch over us,’ but we thought this was going to be the end.”

The AGC left for a time, but came back to set up checkpoints throughout the community and is searching boats going in and out of the community. “My heart dropped because I didn’t expect to see them again so soon because the [guerrilla] group is still pursuing them,” Maria Camila said. She worries this may stir tensions between the two groups.

Maria Camila says she has never felt so unsafe.

“We aren’t free to walk around at night. We all live shut in our houses. All of us in the community are frightened, that’s why we’re living like this.”

She has little faith the peace accord will make a difference in her community or other rural areas in Colombia. “In reality, the hope we have is from God,” she says.

MCC continues to support partners in Colombia that work on peacebuilding initiatives and assist some of the most vulnerable families, particularly those displaced by violence. The conflict has resulted in seven million internally displaced people. 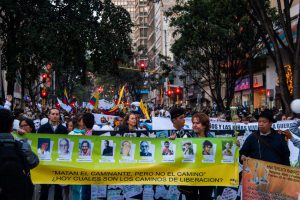 Colombians gather to demand peace in October after a plebiscite to ratify the peace agreement between the government and the country’s largest guerrilla group, the Revolutionary Armed Forces of Colombia (FARC-EP), was narrowly defeated. MCC partners organized ecumenical services for peace and participated in marches in Bogotá. The group in front hold a sign that translates as: “They kill the walker, but not the path – What are the paths of liberation today?” MCC photo/Anna Vogt

In April, MCC embarked on a three-year peace education project with the Mennonite Brethren Regional Council of Chocó to promote an understanding of a culture of peace and how to encourage peacebuilding among youth and young adults in the region and beyond.

One of MCC’s partners, the Church Coordination for Psychosocial Action (CEAS) supports churches and organizations, enabling them to provide trauma awareness and healing, build resilience, and contribute to peacebuilding and reconciliation in Colombia.

MCC’s partners in the country also do political advocacy and help Colombians who flee the country following death threats. There are currently approximately 360,000 refugees, mostly living in Ecuador and Venezuela.

MCC works with a number of MB and Mennonite churches and organizations in Colombia who have been actors for peace in the country for many years. Eanes says MCC continues to accompany and support its churches and partners through their crucial work for peace during this period of instability.

“The churches are figuring out what this post-accord period will look like for them and I think it’s important to walk alongside these partners,” she says.