What's New
A FOCUS on Mission
Must Patience Be So Slow?
Harold Jantz: A Heart for the Mennonite Story
Lorlie Barkman: A Life of Creative Engagement
Last Days, First Days
Women in Ministry: Bertha Dyck
January Moment in Prayer “Holy Spirit—Fill Us!”
The Church as the Patient Body of Christ
Advent: Making Much of Jesus: Christmas Day
Advent: Making Much of Jesus: Fourth Advent
Home News Fresh start for seminary

Interim president follows avenues of collaboration in congregation and conference

A well-known Mennonite Brethren historian is busy envisioning the future. 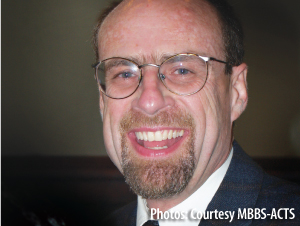 Dr. Bruce Guenther, a professor at MBBS-ACTS since 1999, is interim president and developer of Mennonite Brethren Biblical Seminary Canada. The final shape of this graduate theological school is still on the drawing board, a work in progress, but a project of some urgency.

As part of the process of forming a new MB seminary system, Guenther attends numerous meetings and consultations with MB leaders across Canada, while carrying on with some of his teaching load in Langley, B.C. Just recently, he was away on presidential business for five weekends in a row. Despite the demands on his time, Guenther likes the ideas and opportunities he sees in cross-Canada conversations about this new seminary. In the light of his new duties, he can make adaptations to next year’s teaching schedule, and believes his next term at ACTS will be a little less hectic.

Guenther is no stranger to many Canadian MBs. He is associate professor of church history and Mennonite studies at MBBS-ACTS. He is widely published. He has taught in several Canadian universities and seminaries and worked in student ministry. He is known to most of Canada’s newer MB leaders as the speaker who brings the MB story to life during presentations at the annual Pastors Credentialing Orientation events. Guenther has actively participated in the concerns of the larger MB community during the past decade and looks forward to the time when more MBBS-Canada faculty will be present to add their contributions.

End of an era

His presidential role began as a consequence of a dramatic announcement, made in California. MBBS-Fresno was amalgamating with Fresno (Cal.) Pacific University. It had become clear that the Fresno campus was no longer viable on its own. Like many seminaries in North America, it faced declining enrollments and increasingly difficult budget decisions. MBBS-Fresno had served Mennonite Brethren training needs in Canada and the United States for decades. The merger with Fresno Pacific truly ended an era in MB theological education. But as Guenther is quick to point out, the seminary programs in Fresno remain intact, within FPU. “The school is still there and will continue to serve an MB constituency on behalf of the U.S. MB Conference.”

The change in California affected Canada. First, a task force was appointed by the MBBS board, then a Canadian commission studied the implications and the options. The commission held three regional focus meetings last December and January as part of its ongoing work. It has now hired Guenther as interim president, with a term extending into 2012, to spearhead establishment of Canada’s new MB seminary.

The new president has found “a huge amount of goodwill” in his travels. “I have sensed a strong desire for the new seminary to succeed,” he says. “There is an expectation that our seminary will be more connected to the Canadian churches. We certainly want to be more directly involved in denominational life and want to contribute to the mission to which the MB church is called.”

The new MBBS-Canada will be owned by the Canadian Conference of MB Churches and operated by a board comprised of people elected by the Canadian conference. The seminary’s mandate will be to provide graduate theological training. And it will be Mennonite Brethren.

But the president says the institution will also be interdependent and outward looking. “Of course, we will provide training for MBs from an MB perspective, but we will also be involved with other institutions and people from other denominations.”

Guenther believes there are exciting opportunities for Canadian Mennonite Brethren to build upon. He hopes the seminary will become a vital force in Canadian MB life. “MBBS-Canada has an amazing opportunity to do something unique!”

He points to the breadth of the country and to a trend now very apparent in theological education. Since the onset of online training and higher educational costs, students have turned to part-time studies available at regional locations. They are also looking for online courses for learning opportunities.

The vision emerging from the Canadian commission is one of a multisite seminary organization with a long geographical reach, not a traditional bricks-and-mortar building in one location. “That’s why having a seminary presence through various regional partnerships and centres across the country is so important for a Canadian seminary,” says Guenther. “Partnerships are an important part of our strategy. We need to have multiple delivery strategies for our training programs.” It makes sense to work cooperatively with others, he says. “The point is that without partnerships and centres in several places across the country, we cannot reach our constituency.” Guenther adds that those partnerships do not need to diminish the teaching of MB convictions.

The commission’s focus groups of 2010–11 recognized that students in pastoral leadership training need two approaches. One approach is about obtaining knowledge and skills – training at the graduate level for ministry. The second approach is more personal and transformative – the process of forming and shaping, encouraging personal and spiritual growth in new leaders.

Previously, in traditional seminaries, students would spend 2–3 years studying full-time and participating in campus life. But now, says Guenther, “with most students working in churches and studying part-time, forming a leader is not the sole task of the seminary. The task of leadership development is now shared more directly with churches.”

There was some discussion at the focus groups about whether the seminary’s primary task is to produce pastors. That is certainly an important part of its mandate, but Guenther says, “that mandate can easily be misunderstood.” In the past, there was a “product” for congregations to select. That kind of model, he says, minimized the responsibility that lies with congregations to call out leaders and to be actively involved in leadership development. The seminary brings educational expertise in theological education and leadership training, says Guenther, but it needs to be seen as working alongside other important and effective leadership development initiatives.

The new school will utilize many strategies to minister to Mennonite Brethren conferences, congregations, and regions in Canada. “We are working toward building a more robust presence at ACTS (in B.C.), and we hope to increase our involvement at CMU (in Manitoba),” says Guenther. “We will work at making the seminary more accessible in other regions, too.” He cites examples.

Guenther is enthusiastic about wanting to see seminary faculty actively engage theological issues that arise in the course of conference business.

He has also noticed a growing desire within the conference to enhance standards for its leaders. The annual Pastors Credentialing Orientation event has become a significant gathering. The “Sacred Trust” course, now required of every MB pastor in B.C., is another example.

In short, Guenther sees the new MBBS-Canada seminary as an opportunity to strengthen the broader church and its conferences, offering knowledge and training to new pastors and leaders. He sees it providing expertise in a broader way than was possible under the former, more geographically restricted, model.

That excites the president. Coursework, training, and participation with Canada’s MB conferences and congregations are all parts of what a new seminary structure can provide. “There is always promise in a fresh start,” he says, “and that is particularly true as we recognize Canadian MB needs and how to satisfy them in a fresh way.”