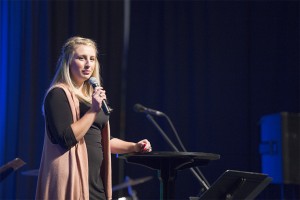 At the annual fundraising dinner, CBC alumna Kate Reid shares how her time at Columbia landed her a “real job”: one that is Christ-centred, kingdom-focused, world-impacting, and comes with a paycheque! (She is the Camp Director of Camp Likely on Quesnel Lake.) PHOTO courtesy CBC

For the second year in a row, enrollment for first-year courses has remained steady at Columbia Bible College, checking a previous pattern of decline at the Abbotsford, B.C., institution. That is one of six reasons for optimism president Bryan Born cited at CBC’s annual general meeting, Oct. 15, 2015. In a time of reduced enrollments among Bible schools, said Born, “It is easy to worry or fear – but I don’t.”

People who join Columbia’s staff report they feel called, said Born. Faculty are active not only in the classrooms but in the churches. Born keeps meeting people who say they are praying for CBC, and he is heartened that CBC grads are serving around the world.

The college continues to expand its programs and broaden the list of courses University of the Fraser Valley and Trinity Western University accept for credit. A new minor in business is part of CBC’s offering. Its introductory course is one of 30 CBC courses transferrable to UFV.

“CBC is uniquely positioned,” said Born. “Geographically and educationally, we are between UFV and TWU. We are neither a Bible school, nor a university, nor a trade school: we are all these things.” 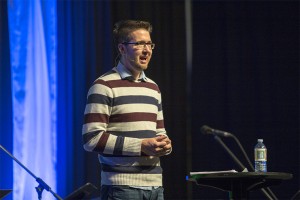 Ongoing issues remain, however. CBC leadership is concerned that the school be affordable to students. They struggle with the reality that tuition revenue is 55 percent of the college’s income. Business manager Scott Henderson said tuition levels have been frozen and the college has budgeted for the first time for less than 400 students. Other measures are being put in place to address budgetary concerns. Among the plans is a decision against granting salary increases for faculty and staff.

CBC’s budget is balanced, Henderson said, “But we are surviving, not thriving” financially.

Giving remains healthy. The college’s annual fundraising banquet, Oct. 24, 2015, was not only well attended, but gifts from the evening exceeded $167,000.