What's New
Tibetans in the Neighbourhood
MCC BC and MDS Flood Response and Partnership
Resilient Leadership: Praying against burnout
Boldly advancing the gospel from our knees
MCC sends food and relief to Cubans in...
Robert Dagenais, pastor of the Sainte-Thérèse church, is...
More donated hay needed to help farmers in...
“God’s time was perfect”
Hope and pray every day
Resilient Leadership: The gift of self care
Home News Canadian Mennonite University graduation 2015 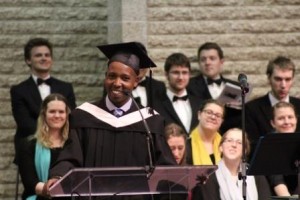 When Joseph Kiranto moved from Kenya to study at Canadian Mennonite University, he wasn’t sure what he wanted to major in. Each class he attended piqued his interest.

“Before long, the list of what I wanted to do became unrealistic for me,” Kiranto said. “I wouldn’t have known what to do with myself if it were not for the help of…the faculty and staff.”

Kiranto told the story during his valedictory address at CMU’s graduation service, held on Apr. 26, 2015, at Immanuel Pentecostal Church, Winnipeg. Kiranto (BA, four-year, peace and conflict transformation studies) was one of 89 students who graduated.

Referencing the Class of 2015’s graduation verse, James 3:17–18, Kiranto encouraged his fellow graduates to do the best they can in spite of the obstacles they might face.

“With credentials, we honour the credibility of the tangible skills, transferable competencies, vibrant imaginations and responsive hearts of the graduands,” Pauls said. “We also profess trust in their capacity and commitment to be agents of service, leadership and reconciliation in church and society.” 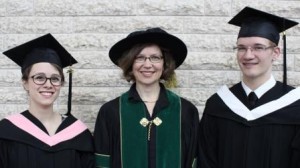 Earlier in the service, Hippolyto Tshimanga, a theologian and missiologist who works as the director of Mennonite Church Canada’s Africa, Europe and Latin America Ministry, delivered the graduation address.

Tshimanga challenged graduates to face the obstacles they encounter with bravery.

“Believe in your God-given potential, believe in the education that you have received and keep on moving,” Tshimanga said. “What you should have is unshakeable, unshakeable belief in what you are able to accomplish. Have the courage to act on your belief.”

At With Gratitude, a CMU graduation weekend event at which class members share their experiences through spoken word or musical performance, Clare Schellenberg (BA, four-year, peace and conflict transformation studies) reflected on her time at CMU, which included an independent study course that involved hiking the Camino de Santiago, an 800-kilometre pilgrimage route in Spain.

Schellenberg said that her time at CMU altered her understanding of peace and justice, and highlighted for her the importance of relationships in navigating the conflicts people face.

“I am leaving with an imagination to reach out to those I fear, to touch the heart of complexity, to imagine beyond what is seen, to risk vulnerability one step at a time and to open my mind and heart as big as an ocean,” Schellenberg said.

Speaking at the same event, Kathy McCamis (master of arts, theological studies) reflected on how the costs of doing a graduate degree seemed high when she resigned from her position as a youth pastor to pursue full-time ministry studies at CMU. 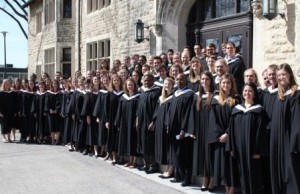 McCamis, who was one of four graduates who earned their MA from CMU in affiliation with Mennonite Brethren Biblical Seminary, also realized she was studying for her MA at a time when many people question the value of a seminary education.

McCamis does not regret her decision, though.

“I graduate having been formed as a person who is growing in my ability to love God and to love my neighbour, as well as to love myself,” she said.

“That to me is the greatest gift of seminary education, and that is worth infinitely more to me than any of the costs that I’ve incurred along the way.”

The graduation service and With Gratitude presentation were part of a number of events that occurred during graduation weekend, including a gala dinner Apr. 24, Spring Concert Apr. 25, and baccalaureate service Apr. 26.

The entire 2015 graduation service is available for viewing on CMU’s Youtube channel.