Human rights advocate grew in faith –and humour – at MBBC 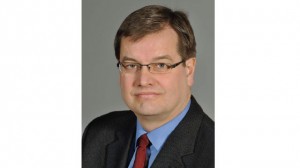 John Siebert is one of four 2013 recipients of the Canadian Mennonite University Blazer awards for alumni of CMU (or its predecessor colleges) who “embody CMU’s values and mission of service, leadership, and reconciliation in church and society.” Currently executive director of Project Ploughshares, an agency of the Canadian Council of Churches that works to prevent war and build peace, he has also worked in the Canadian foreign service, as a consultant to NGOs, and for the United Church of Canada on the advancement of human rights.

Growing up in Vineland, Ont., Siebert followed the family tradition to Mennonite Brethren Bible College, Winnipeg, 1977–1979, where his older brothers had studied and his father sat on the board. His interests and abilities later led him to study political science at the University of Winnipeg, and theology at St. Michael’s College at Toronto School of Theology, and his work has taken him into litigation and advocacy on weighty matters like human rights and nuclear disarmament. He seeks to help the church in Canada think about how we contribute “to help bring resolution shorter-term and longer-term, so peace is sustainable.”

“When you encounter human frailty, human misery, you have to figure out how to live in the midst of it and celebrate and enjoy people,” says Siebert.

Community has played a role in that for Siebert. The dorm experience at MBBC left an imprint of humour – “perhaps a little dark” – that has been instructive for his work now. (The young men developed a “Society for Old and Long Coats” and created sustained jokes that mined their cultural background.)

This sense of fun, even amid heavier matters, was evident when Siebert introduced himself to a crowd of government officials in Ottawa as one who “work[s] with guns, bombs, and war.” He let the nervous silence hang for a moment, before adding, “Of course, we’re against these.”

And faith is a key component of how to live with joy. “Those who work for profound change need to be sustained in that because victories are few and far between,” Siebert says. “Christian faith provides sustenance in the midst of struggle.”

The Blazer Award was presented to John Siebert; Leonard Doell who builds relationships between Mennonites and First Nations peoples with MCC Saskatchewan; pastor, author, and kidney donor Carol Penner of Vineland, Ont.; Robin and Zachary Heppner Entz who work in community development in Mali with World Renew; and originators of the MCC thrift store Selma Loewen, Sara Stoesz, Susan Giesbrecht, and Linie Friesen at CMU on Sept. 27, 2013, as part of the Fall Festival.