What's New
Through the conflict, life carries on in Ukraine
A FOCUS on Mission
Must Patience Be So Slow?
Harold Jantz: A Heart for the Mennonite Story
Lorlie Barkman: A Life of Creative Engagement
Last Days, First Days
Women in Ministry: Bertha Dyck
January Moment in Prayer “Holy Spirit—Fill Us!”
The Church as the Patient Body of Christ
Advent: Making Much of Jesus: Christmas Day
Home MB HeraldColumns A journey through cancer in the cradle of community

A journey through cancer in the cradle of community 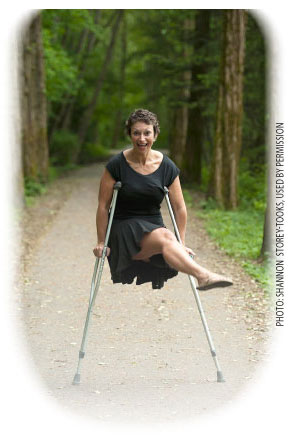 There are two parts to this story. It starts with Margie, a woman in her mid-30s; outgoing, mother of two, a worship leader in her church (Bakerview MB, Abbotsford, B.C.), and lover of Jesus who believes in reaching out to the unsaved, including people in her bellydancing class. The other part of the story is about family – her church family and about 680 other “family” members on Facebook.

The two parts of the story become one. Margie Peters and her husband Nick remember the June day with clarity. It was Game 5 of the Canucks’ 2011 final playoff series, and they were going to take her mother, visiting from out of town, to see the Stanley Cup festivities on Abbotsford’s South Fraser Way. They never got there, except en route to Abbotsford Regional Hospital and Cancer Centre in an ambulance.

Since January, her left leg had been increasingly painful. Nick offered to piggy-back her to the car that evening, and she started to jump up on his back. They both heard and felt the snap – and she felt the pain – as her femur  broke.

So began a year she and her family would never want to repeat. So, also, began what Margie regards as God opening a door to show her, and others, his love.

Miracle 1: Through an unlikely series of events, Margie’s mother – a nurse – was on hand to help when the leg broke.

Margie had “amazing care” by a team of Vancouver General Hospital specialists, a team that kept in consultation with other major hospitals in Canada. Following nine days of exhaustive and exhausting tests, seven doctors with their interns filed into her hospital room.

They told her she had osteosarcoma, the same kind of bone cancer Terry Fox had. It had already metastasized to her liver and lungs (Stage IV). They could remove the leg, giving her a 3–5 percent chance of survival, or repair the fracture to provide some comfort for up to two years before certain death. They left it to her to decide.

Margie thought of Abraham, called to the mountaintop with Isaac, the boy who solely represented Abraham’s future. Margie thought of her two teenagers, still in school. Like Abraham, she would need to trust in God.

“We had a sense – ‘this is crazy, it’s huge.’” Margie recalls. “What does God want out of this?” She believed God’s will was for her to face her death and keep the leg, but her family’s consensus was amputation because they knew Margie is a fighter and there would be a chance she could live.

In a weakened state, Margie had to give God her children, to wrestle with family consensus versus personal conviction, and make a choice between two horrible outcomes, lacking real clarity on God’s purpose in it all.

Her care group, on a retreat that weekend, texted Psalm 143:7–8. It gave her and Nick peace that the decision would be clear in the morning – and it was.

One doctor, who had advised that she seriously weigh both options, came to her room in the morning and said he’d reconsidered; the only chance was to make an aggressive attack on the disease, starting with removal of the cancerous leg.

“By then,” she muses, “I was so grateful that I could cut off my leg.” She now had her decision and her peace, and the surgery happened that evening.

Abraham had to go through the business of trusting God alone. “But God gave me the gift of community,” says Margie.

So the leg came off.

Sooner than usual medical practice, a horrible time of chemotherapy followed, with extremely aggressive chemicals that became increasingly difficult to bear. But she made it, thanks to her sense, all through the chemo, of being lavished with love. 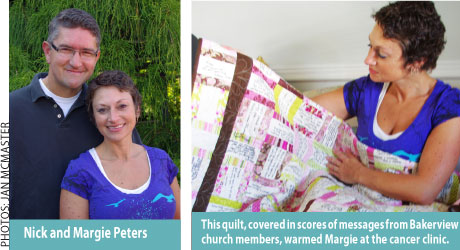 Miracle 3: The chemo treatments had prevented healing of the amputation site, but never once in that whole six months was there any infection in the open wound.

Then, doctors needed to deal with her liver tumours. It was major surgery again, and instead of the two spots on the original scan, seven were now visible. Scanning as they went, the doctors removed about 60 percent of her liver, along with the neighbouring gall bladder as a safety measure.

The biopsies showed the tumours had no live cancer cells in them. The chemo treatments had done their job. The lung spots had not changed at all – a good sign – and were so small there was nothing big enough to biopsy. She is now monitored every three months.

Miracle 4: Thorough scanning showed no living cancer cells anywhere in Margie’s body. “And I had never thought I would be healed!”

Her spiritual family, Bakerview MB Church, had been stunned when Margie’s prognosis was announced to the congregation that Sunday morning during the Canuck playoffs. Margie has been part of Bakerview for 19 years. She is widely known and loved. They prayed for her during that service. And they have kept her in prayer.

Many other friends who aren’t in the Bakerview family were equally upset by the news. They all met on Facebook after friends Shannon Storey-Tooks and Chrissy Funk started a page called “Praying for Margie.” The patient herself now keeps friends up-to-date with periodic posts, but from the earliest days, the encouragement and love through friends’ comments on that page quickly became a faith witness to non-believers, she feels.

Many Facebook friends have written that Margie is an inspiration. One wrote, “You leave me speechless.” Another wrote that her testimony reminds us, “We should not just look at the end destination but rather be aware of the journey that takes us there.” The online page is a record of love that accompanied Margie on her journey.

In big ways and small, she has felt God lavish his love on her. She speaks of a wigmaker in her community group who brought her one new hair piece after another during chemo. That was just one example of love “beyond my understanding.”

“My church family was such a witness,” Margie says. It wasn’t just her care group. Some people in the Bakerview congregation shaved their heads during the chemo. Youth pastor Stephen Philps, who had announced her diagnosis that Sunday, was “amazing” in his support of the Peters children, spending many hours with Margie’s son Jackson, while youth coordinator Ruth Rempel continually kept contact with daughter Rebecca. “That meant so much to my heart.”

Observing the church family’s actions, a friend who is into New Age spirituality told Margie, “This is the first time I have had a glimpse of what faith is.”

Margie sees God’s hand in all this. “I have felt my missionary field is here. We don’t live in heaven, but God can use every situation. Why should I expect that God would not use me even for one person?”

She adds, “God’s been preparing me my whole life for this.”

A few weeks after the wonderful news of Margie’s scan results, the Peters children left on a mission trip to Berlin. Only then did the reality strike her that she really wasn’t going to die any time soon. “I never planned for that,” Margie says. “I had thought I could make do with just one leg for a year or two, but now I see the reality I will have only one leg for 40 or 50 years.”

She is going to rehab. She is working on a prosthesis. Bit by bit, she is exercising, working out, regaining strength, making the effort to renew her body. It’s still in process, and it will be long. She has joy.

She can lead singing once more. She loves keeping her eyes open on the platform, watching her church family worship. “It is a gift to look into everyone’s eyes. Sometimes I think too much of how we do church is based on the individual. But we all are called to come together and celebrate and to see the love of God.”

Everywhere she goes now, people tell her, “I have prayed for you.” Her year-long journey was filled with almost unrelenting agony and excruciating pain. But she feels that God has provided a myriad of miracles and relentless love to help her through. “God was always there,” she says. “All through the journey, I never felt alone.”

Miracle 5:  “It seems that my story is a door opener for people. God is working with the story.”

She confesses that many years ago, “I made a deal with God. I told him I would always say yes to what he asked me to do.” Through this ordeal, she has seen God touching lives, opening doors to those who need to see his love.