What's New
MWC Assembly small but full of joy
Bad back doesn’t hold back MDS volunteer
Transition in CCMBC National Faith and Life Leadership
Leading through the trauma of covid: Part three...
The church distracted: When the main thing is...
Remote wilderness rescue turns into service with MDS...
How open is your mind?
Following Jesus together across barriers
2022 National Faith & Life report to the...
CCMBC 2022 national assembly summary
Home Arts & Culture Cancer story steeped in wit and faith 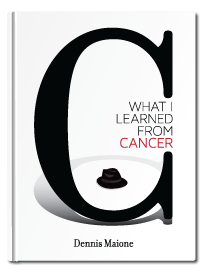 What I Learned from Cancer
Dennis Maione
Prompters to Life

Dennis Maione is only 27 years old, a year into his marriage, when he notices signs of what turns out to be rectal cancer. He experiences the stages of denial and acceptance that cancer patients typically encounter as they chart new waters of waiting, treatment and recovery.

But for Maione, an evangelical Christian writing his story for a largely secular audience, cancer is more than an enemy to be beaten. As the title of his memoir suggests, it is also a teacher. Maione’s inquisitive and reflective spirit become fully engaged in 2004 when he learns that he has Lynch syndrome, a congenital condition associated with the high rates of colon and uterine cancer in his extended family, and then three years later when a second growth appears, this time in his colon. By this time he is in his 40s, when he is at the height of his career as a technology teacher and writer.

These developments force him to reflect further on his own mortality and navigate the uneven treatment and compassion he finds in the medical system. Throughout the saga, we get to know and appreciate the dedication and compassion of his surgeons and other medical friends in Saskatoon and later Winnipeg.

But we also share Maione’s frustration with another medical professional who refuses to answer questions arising out of Maione’s and his devoted wife Debra’s extensive research. In a dramatic investigative jaunt, the couple secures a consult with a leading specialist in Toronto, whose advice is much more reassuring and helpful.

Some readers may quibble with Maione’s occasional digs at the medical system. But overall, the account is a well-told portrayal of what a cancer survivor experiences. Maione dishes out plenty of wit and self-deprecating humour, which make for a compelling read. Chapter epigraphs taken from literature offer poignant nuggets on the meaning of suffering, healing and life.

Maione also tells his story in a way that is steeped in his faith and that his secular friends can understand – without sentimentality or preachiness. Many of the near-misses and lucky breaks he experiences may seem like coincidences, Maione says, but he looks on many of them as a “manipulation of events by a deity who loves me and is actually interested in how my life turns out.” That “prime mover” often works through community – another strong theme in the book.

What I Learned from Cancer is a riveting memoir, but Maione adds a number of bonuses that take it beyond that genre. Part II includes essays on various issues aroused by his experience; these include community, the medical profession and death. Part III is an informative exposé about cancer and “heritable cancer syndromes” – set down in the form of a fictional conversation with a doctor, taken from a composite of the consultations and research the Maiones did through the years.

Today, Dennis Maione leads a remarkably normal life – missing a colon, but working as a full-time writer and inspirational speaker. What I Learned from Cancer, dedicated to Reg Litz (a friend who succumbed to pancreatic cancer at age 56), is an inspiring reflection on what a journey with cancer can teach us about life and community.

Byron Rempel-Burkholder is a Winnipeg writer and editor.

A journey through cancer in the cradle of...

Bread of earth, bread of heaven