What's New
A FOCUS on Mission
Must Patience Be So Slow?
Harold Jantz: A Heart for the Mennonite Story
Lorlie Barkman: A Life of Creative Engagement
Last Days, First Days
Women in Ministry: Bertha Dyck
January Moment in Prayer “Holy Spirit—Fill Us!”
The Church as the Patient Body of Christ
Advent: Making Much of Jesus: Christmas Day
Advent: Making Much of Jesus: Fourth Advent
Home Life & Faithfeature articles Bread of earth, bread of heaven

Bread of earth, bread of heaven

What local eating taught me about food and God

Two years ago, my son Joel did a Grade 8 project on the environmental impact of our food industry. Our supper conversations suddenly revolved around issues like food packaging, and the fuel it took to get our food from farm to plate. On average, he learned, our food travels more than 2,500 kilometres, even though much of that same food could be supplied by local producers.

At the time, there was a lot of media hype about the subject. Books like Barbara Kingsolver’s Animal, Vegetable, Miracle and Alisa Smith and J.B. MacKinnon’s The 100-Mile Diet were hot-selling doxologies to local eating. 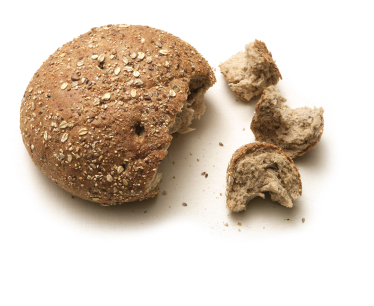 Largely because of our children’s nudging, our family signed up for the100-mile diet challenge organized by a group of Manitoba food activists. For 100 days, a group of at least 100 Manitobans would eat only food produced within a 100-mile radius of their home. Coffee, chocolate, and citrus fruit would be replaced with rose hip and Labrador tea, homemade preserves, and strawberries we had picked and frozen.

We weren’t under any illusion that local eating was the only or primary solution to a greener, more just earth. Scientists, economists, and theologians alike are not of one mind on whether organic is better than non-organic, or how global trade in food through large corporations can balance the needs of small, local producers.

Our experiment with the 100-mile diet, however, was an attempt to search for new ways to be good stewards of the environment and to get closer to the earth and to the people who actually produced what we ate.

More than a commodity

As we scouted out local sources for rolled oats, honey, pasta, and butter, our food became more than a commodity we threw into a supermarket cart. We knew our hamburger came from the pasture-fed cow of my sister-in-law’s colleague. Buying our lettuce and peppers at the farmer’s market became a chance to make new friends and learn about the challenges small producers face in finding markets.

Through it all, food become more sacred to us than it had been before – a new avenue for tapping into God’s mission and work in the world. Until then, I hadn’t paid much attention to how thoroughly food is woven into the key events of the Bible: Adam and Eve eating the forbidden fruit, the Israelites’ experience of the Passover meal and manna in the wilderness, the prophets’ fiery rebukes to those who denied bread to the hungry.

The centrality of food doesn’t let up in the New Testament. Jesus is tempted to turn stones into bread. He places daily bread at the centre of the prayer he teaches his disciples, the first and most tangible item in its list of specific petitions. He spends a lot of time at dinner parties. His stories are often about farmers and food. He multiplies loaves and fishes for a crowd. Most importantly, he instructs his disciples to reenact their last supper together in remembering his broken body on the cross.

I became convinced that one of God’s primary ways of reaching our hearts is through our stomachs. Both the dining room table and the communion table took on new meaning. Both tables tell us that the gifts of the earth point us to heaven, and that the gifts of heaven come to us in things we touch.

When we North American Mennonites think of the Bible and food, we tend to look at the big ethical call to feed the world’s hungry. The Old Testament laws and the words of the prophets are clear in that call. Moved by Jesus’ parable of the sheep and goats in Matthew 25, Mennonites have often led the way in serving “the least of these” in the name of Christ, providing food aid, and helping people improve their food production.

After the 100-mile diet, however, I had additional questions that had to do with my own needs and practices, not just the call to charity. What is the relationship between my spiritual health and my diet? How do my food choices – the amount and kinds of food I eat – exhibit the best stewardship of God’s earth?

Pointing to the holy

I’ve found some clues in the notion of “food as sacrament,” a phrase introduced by Michael Schut in his book Food and Faith: Justice, Joy and Daily Bread. Many Christians who describe baptism and communion as sacraments believe that heaven and earth truly come together in the bread and wine as it is blessed and shared by believers, thus making them holy. Schut uses the term more broadly. Sacraments, he says, are physical things that point us to the holy, that open to us a new vision of God’s ways.

He quotes writer Frederick Buechner in Wishful Thinking: “Sacramental moments can occur at any moment, any place, and to anybody. Watching something get born. Making love… Somebody coming to see you when you’re sick. A meal with people you love… If we weren’t blind as bats, we might see that life itself is sacramental.”

That’s a definition we Mennonites can live with, even if we have given up the vocabulary of sacrament to describe the Lord’s Supper. We may not feel as strongly as Catholics that we need weekly helpings of communion bread and wine to keep our spirits alive, but look how food persists as a sacred feature of our church life. At least until our lives were swallowed up in business, potlucks were almost as obligatory as communion, suggesting that eating together is a holy event, a sign of redeemed humanity.

So whether it’s in our communion celebrations or in our church potlucks, we already have inklings of how these physical gifts of food not only connect us to God, but bring our faith down to earth. Now, how can that same sacredness be brought to the kitchen, dining room, and picnic tables?

I have a long way to go in discerning answers for my life, but these are a few practices that have come out of our ruminations the last two years:

In the Gospel of Luke we read about two dejected disciples walking away from Jerusalem, bemoaning the death of Jesus. The risen Jesus comes alongside them, and strangely, they do not recognize him. They walk and talk, and Jesus “opens the Scriptures” to them about how the Messiah was destined to die and rise again. Still no recognition.

But that night, when they sit down for supper together, Jesus offers thanks over the bread. And as he divides and passes it, suddenly the disciples’ eyes are opened.

Something like that happened at our breakfast table not long ago. It was a morning for muffins, and for juice we had just rediscovered in our freezer – juice extracted from tart grapes that grew in a friend’s backyard.

As we tucked in, my daughter Hannah announced, “Hey, we’re having communion!” We chuckled. We knew we were not celebrating communion; we just happened to be tasting bread and grape j

uice. The conversation soon moved on.

But there was something about that offhand comment and chuckle. Like Abraham and Sarah laughing at the miracle of a child in their old age, we were laughing at the strange link between our ordinary breakfast and the central event of our faith: God’s flesh on a cross, broken for us.

Somehow, in that fleeting recognition, those muffins and that juice became sacraments.

—Byron Rempel-Burkholder is an editor whose work with Mennonite Publishing Network includes editing the devotional magazine Rejoice! (published jointly with Kindred Productions). He is also co-editor of No

What are Canadian Mennonites eating?