What's New
Through the conflict, life carries on in Ukraine
A FOCUS on Mission
Must Patience Be So Slow?
Harold Jantz: A Heart for the Mennonite Story
Lorlie Barkman: A Life of Creative Engagement
Last Days, First Days
Women in Ministry: Bertha Dyck
January Moment in Prayer “Holy Spirit—Fill Us!”
The Church as the Patient Body of Christ
Advent: Making Much of Jesus: Christmas Day
Home Life & Faithfeature articles When one song doesn’t fit all

When one song doesn’t fit all 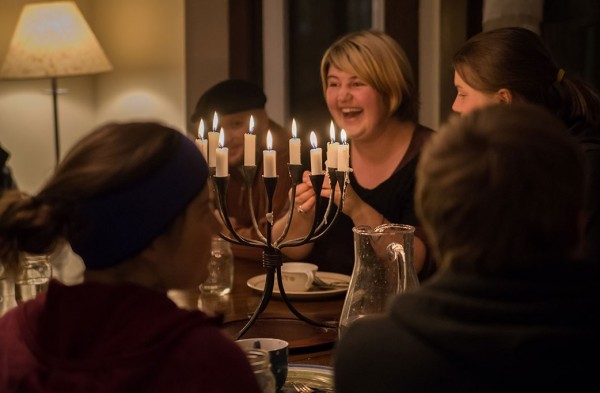 In a little sanctuary, the sermon ends, and a member confesses to the congregation, “I find this Bible story disturbing; it’s challenging my assumptions.”

College students, neighbours, and people at risk of homelessness gather in a downtown living room holding papers titled “evening prayers” with the instructions: “Blue couch side reads the regular print; window side, bold print.” They share the week’s experiences (a new job, a fresh injury), then crowd into the kitchen for cookies.

The rare gift of listening

The mentality that, as a church, “if we do a professional job on stage, the seekers will find what they’re seeking” no longer fits reality, writes author Thom Schultz. He recommends churches “move from passive spectator services to settings that allow the ‘spiritually open’ to participate, ask questions, and share their thoughts.”

At Highland Community Church, Abbotsford, B.C., a congregation of social activists and caregivers who value hospitality over polished performance, the high point of Sunday morning isn’t the sermon, but the sharing that follows. Pastoral elder J Janzen calls it a “time to listen to God…when people can share what they have heard God saying in the Scripture reading, songs, and sermon, as well as their prayer requests and praise.” While Highland borrows a liturgy and lectionary from other church traditions, the open mic is “an explicit effort to practice the Anabaptist tradition of community hermeneutic.”

Sometimes the sharing sparks ongoing dialogue, like when one man declared: “I’m more and more convinced that the church doesn’t have all the answers,” and Janzen met him that week to continue the conversation about who Jesus is. “Because we listen to their doubts and take their questions seriously,” Janzen says, “people are willing to consider our claim that Christ is Lord.” Visitors have become regular attenders because “they were so impressed that we would give permission to freely discuss those kinds of questions,” reports Janzen.

House Blend, a two-and-a-half-year-old MB ministry in Winnipeg’s West End, begins every Tuesday night prayer time with each person sharing one “high” and one “low” from their week, which becomes a prayer of openness to God’s involvement in everyday life. “This simple practice has had a deep subversive power,” writes pastor Rachel Twigg Boyce in a Vision article, as House Blend includes many who’ve felt ignored and “find it a rare gift to be able to speak about their highs and lows with people who are actively listening to them.”

Shaped by the values of simplicity and community, for the past year, Fort Garry MB Church, Winnipeg, has offered Sunday evening worship events over homemade soup bowls, communion cups, and coffee mugs. “The Open Table” is a fitting name for these round-table gatherings, where both long-time churchgoers and those unfamiliar with church are welcomed to “bring your doubts and questions; bring your friends.” Fort Garry pastor John Unger says The Open Table has prayed people through many life transitions and celebrated their first baptism at Easter.

“Eating together is so biblical!” says Twigg Boyce about House Blend’s practice of sandwiching Tuesday night prayers between supper and dessert. “It breaks down boundaries and is an easier way to join in and meet people when you’re new.” Twigg Boyce also notes that for some of House Blend’s guests, the potluck may be their only good meal all week. 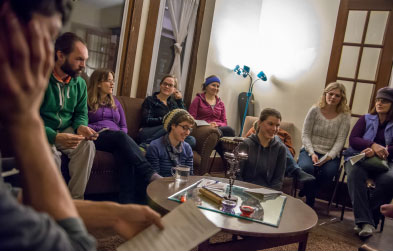 Highland values the shared experience of communion, partaking every other week and in various forms: eating in small groups reminds them “God saves us through community,” coming forward to dip bread in a common cup expresses salvation as a gift with one source for all, and passing trays, the call “to imitate Jesus who loves and serves.”

Eugene Peterson writes that of the languages of the church – kerygmatic (preaching), didactic (teaching), and paracletic (working of the Spirit) – the latter has been “most often slighted” by the North American church, but it is “absolutely required” for the process of “growing up” in Christ. Paracletic is “a way of speaking and listening that gets the words of Jesus inside us so that they become us.”

To that end, Imago Dei Vancouver sees church as “a place people come not only for instruction but restoration,” says pastor Rob Des Cotes. Imago Dei’s monthly Saturday evening contemplative services – readings and songs interspersed with unrushed time for silent prayer – draw mature Christians and young people “hungry for God and seeking expressions of worship that allow them time to process the deep yearnings of their hearts,” says Des Cotes.

Contemplation is not a different type of prayer, says Des Cotes, but its receptive side, “offering time for the Lord to communicate with us, often simply in the form of love and peace.” Distinct from yoga and Buddhist meditation that seek peace ‘self with self,’ “the nature of Christian prayer is ‘self with God,’” says Des Cotes.

“Hospitality is key to any worship setting,” says Artisan Vancouver pastor Nelson Boschman. Reminding people “God’s welcome is not conditional on our appearance or ‘track record’” is a primary role of a worship leader. Through silence, historically rooted and poetically rich music, humour, and guided contemplation of artwork such as Rembrandt’s “The Return of the Prodigal Son,” Artisan celebrates the mystery of the Trinity and the relationship to which God calls us.

Resisting the temptation to entertain, Des Cotes embraces the discomfort many feel during silence because of the transformative power of facing our inner poverty in Christian community. Imago Dei’s Sunday afternoon prayer and discussion gatherings at Des Cotes’ home often include “people high-fiving each other over transformations.”

Des Cotes tells the story of a woman who’d served the Lord for years but experienced a renewal in her sense of God at Imago Dei. Every gathering afterward, more friends and family joined her because of the fresh “lightness” they saw in her. “We need to be people on the road,” says Des Cotes, because “nothing is more winsome than a Christian who’s onto something.”

Stepping off the stage

The problem for the church today, say How Would Jesus Lead Worship? authors Sam and Sara Hargreaves, is we’ve separated “worship as lived out in daily life and worship as corporate gathering…. so that for some believers the only point of the corporate gathering is the chance for individuals to meet with God through a narrow selection of worship songs.” They beg the North American church to consider “whether people other than musicians” –  or pastors – “could rightly be called worship leaders.”

“Having many voices involved in Sunday worship has been a high value,” says Boschman of Artisan, which practises “collaborative planning” through design team meetings. After a potluck breakfast, volunteers read upcoming Scripture texts, and “believing that worship at its best is a two-way conversation – revelation and response,” ask: “How can we help people hear and respond to the Triune God through this text?” “This leads to imagination-storming” says Boschman, about art forms, images, poems, and stories. In addition, Artisan holds a couple of annual “arts potlucks” – smorgasbords of songs, dances, paintings, and writings on themes from the church calendar.

Highland’s responses to Scripture sometimes take the form of lectio divina, rather than a lecture-style sermon. A Scripture text is read repeatedly: after the first reading, people share what they observe; after the second, what they think it means; after the third, what they hear the text calling them to do or be. Janzen and co-pastor Christine Kampen only preach some 25 times a year, inviting guest speakers and Highland members to share the pulpit, included a father-daughter team, and a songwriter sharing songs about her experience of grace.

House Blend’s simple responsive readings and Taize songs mean anyone who can read can lead worship. Those who don’t read learn through repetition, and individuals who experience mental illness, disability, or trauma find “safety in the consistency of doing the same thing every week,” says Twigg Boyce. “Participation is based on being present – not on the unique gifts of a particular person or speaker,” says Twigg Boyce. “Many Christian communities are founded – unintentionally I’d suggest – around a requirement that people have a certain level of intellectual ability.”

“I envision a community where all can belong and be involved, regardless of their cognitive ability.”

For Mennonite Brethren, with our values of borrowing from likeminded traditions and practising a community hermeneutic, “Join me in a time of worship” is a rich and varied calling; it can’t be bought for a song.

Who is my neighbour