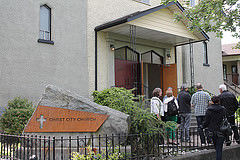 On June 16, South Hill Church voted by more than 80 percent to disband. But the decision came with unprecedented generosity: South Hill agreed to donate its building to Christ City, allowing the newly planted MB church to start with a debt-free facility.

“I was humbled by God’s exceeding grace and favour toward our church plant,” says Christ City pastor Brett Landry, “and humbled as a leader by [people] who would obediently and sacrificially answer God’s call in this way.”

From 1945 to 2007, the South Hill building was home to Vancouver’s first Mennonite Brethren congregation. (Vancouver MB met in rented facilities through their first decade.) As surrounding neighbourhoods changed, VMB members decided on a bold experiment in 2007, uniting with the English-speaking congregation of Pacific Grace MB Church under a new name, South Hill.

Pacific Grace pastor Mike Nishi came as leader of the new church venture. His emphasis was on discipleship and reaching out to the community, as the old German and Chinese congregations worked together to connect with English-speaking “second-plus” generations in south Vancouver.

Nishi resigned in May of this year, effective mid-July. He says his heart remains in multi-ethnic ministry, and hopes to continue it in an MB setting. 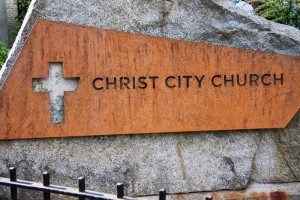 Vancouver MB left a rich legacy, frequently sacrificing time and funds to plant new churches. Among them were Fraserview MB (1954) and Culloden MB (1968). With a similar passion, South Hill offered its building in 2012 for a monthly inter-church worship night for teens, a testament to the event’s spectacular growth over the previous year and a half.

Worship event youth leader Jonathan Mitchell says South Hill has an amazing history: “So much has happened in that building. It seems like holy ground in many ways.”

Pacific Grace, which officially joined the B.C. conference in 1964 as Pacific Grace Mission Chapel, also has a church-planting history. Henry G. Classen started it as a street ministry in 1950; in the 1970s, Chinese members took over leadership. In 2007, Nishi recorded South Hill’s genesis, calling it Pacific Grace’s “10th church plant.” Among the others are South Vancouver Pacific Grace, North Shore Pacific Grace, and two churches in Venezuela. PGMBC started Cantonese language ministry in 1974 and added Mandarin ministry in 1999.

One part of VMB’s story has a particular sweetness for many members. In 1961, VMB planted Burnaby’s Willingdon Church, a move which ties to the events of 2013. Several leaders from Vancouver’s Westside Church came out of Willingdon. And Westside is birthing Christ City. Meanwhile, Willingdon has since adopted Landry as church planter, completing the circle of blessing. 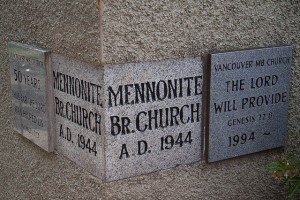 South Hill’s retiring moderator Brian Ekk says, over the years, his church made a lot of community contacts and “planted a lot of seeds.” The decision to disband was very hard, he says. But he believes God was in the timing of the February appointment of church planter Adam Wiggins as interim associate pastor.

Ekk says Wiggins, through his contacts, knew about Landry’s ministry activities, and things came together in an amazing way. “It all clicked into place,” he said. “It’s not a coincidence.”

Landry’s team had already signed a contract to meet in Marpole’s Metro Theatre before the South Hill building was offered. He says Metro people and the B.C. conference have been “great” about the change. Meanwhile, Landry and his team, intentional about building relationships with people in south Vancouver, are holding regular pre-launch meetings, long weekend picnics, and summertime backyard barbecues.

Christ City church is expected to become a three-way mix of people, reflecting the roots of the old VMB, some newer members of South Hill, and people with whom Landry and his team are connecting.

Landry expects Christ City will have “a team of gifted, missional Vancouverites who love Jesus!” Together, he says, they are building a vision and developing relationships with believers and non-Christians alike.

The South Hill wrap-up service of celebration is scheduled for July 14. Christ City remains busy through the summer, and has set Sept. 22 as the start date for services in the building they know God provided.

God’s witnesses to the ends of the earth

John Neufeld appointed to Back to the Bible...

[…] The blue of the ocean, the tall high rises, the ethnic diversity, and the organic sensibilities all felt familiar. My sister and brother-in-law live just blocks away from Reality Vancouver’s office space. My dad taught for 30 years at the high school near Christ City Church’s building. […]