What's New
A FOCUS on Mission
Must Patience Be So Slow?
Harold Jantz: A Heart for the Mennonite Story
Lorlie Barkman: A Life of Creative Engagement
Last Days, First Days
Women in Ministry: Bertha Dyck
January Moment in Prayer “Holy Spirit—Fill Us!”
The Church as the Patient Body of Christ
Advent: Making Much of Jesus: Christmas Day
Advent: Making Much of Jesus: Fourth Advent
Home News Hotspots stokes prayer for mission workers 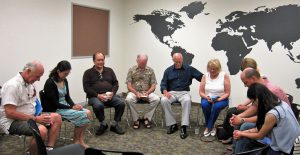 “Hotspots: that’s what we will call it.” It was the late 1990s and Evelyn Poppy was addressing a small group at Willingdon Church. This group, gathered to intercede for a citywide evangelical crusade, soon evolved its purpose into a mission prayer team. Their focus continued to expand to interceding not only for missionaries but for the regions where they served: for world “hotspots” like the 10/40 window, the persecuted church, and refugees.

Initially, Sheila Walton, a returned missionary and a persistent prayer warrior, gathered a group together to intercede during the Sunday School hour.

Evelyn Poppy stepped up to offer valued leadership. She maintained a book featuring Willingdon missionaries and their current prayer letters along with a map to show where they laboured.

When Evelyn became fatally ill, another faithful attendee named Travis Wilms served in her place. When Travis moved away, he passed the torch to a member of the mission committee, who recently passed it to Willingdon mission pastor John Best.

Each leader has added a new and beneficial dynamic.

Hotspots meets every Sunday at 10:00 am throughout the year. All ages are encouraged to attend. Drop-ins are welcome.

Short-term mission teams benefit by sharing pertinent prayer requests, such as a need for financial support. This fosters prayer support during their mission trip and then thanksgiving when they report back.

The missionaries Hotspots pray for report that they feel incredibly supported by knowing there is a consistent group meeting to read their letters and pray in detail for their requests. When they return for home assignment, it’s customary for them to attend and share.

Hotspots keeps missionaries front and centre in the hearts and minds of the church.