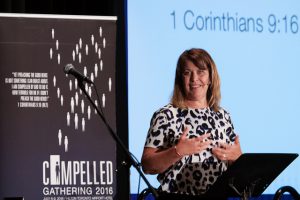 The reason we’re here – on earth, that is, not merely at this convention – is that “lost people matter to God.”

Janet Thiessen, associate pastor at North Langley (B.C.) Community Church, felt compelled by Jesus to reach moms when she first moved into the community over a decade ago. The Wednesday mom’s group that developed became so popular the local school had to avoid holding field trips Wednesday mornings for lack of volunteer chaperones; they were all at NLCC.

They did fun and useful things together, but for Thiessen, the purpose was to share the gospel.

Community is central to the gospel story and critical to gospel witness, said Thiessen.

The preaching Paul talks about in the Corinthians theme passage is not a preaching giving a sermon but a proclamation, an announcement of good new – one that every person can do, said Thiessen. And when he uses “you,” it’s always in the plural.

“God always used communities to advance his mission,” she said. “the practice of Christian community makes the gospel a lived reality.”

It’s a solution to the problem of God’s invisibility, Thiessen said. Jesus came to earth as God incarnate; and now his people carry on that mission of making God visible on earth.

Hindrances to our witness, says Thiessen, include hypocrisy (people don’t come to church for two reasons: they don’t know a Christian….or they do!), lack of cooperation with other gospel-centred churches, and a failure to prioritize the time and money (i.e., do our budgets show an investment in making space for outsiders to intersect with people of faith?).

When we’re working with Jesus, it’s not one plus one equals two: with the Spirit, it is multiplied, said Thiessen.