Excitement at a business session?

A motion came from the floor before the agenda was approved.

Kevin Koop of Crestwood MB Church, Medicine Hat, Alta., moved to accept the mission statement “to multiply Christ-centred churches to see Canada transformed by the good news of Jesus Christ” – and then moved to strike the word “multiplying” from the statement as it fails to reflect the other three services areas of the conference.

Numerous voices spoke in approval of the word “multiplying.”

“A lot of heartfelt, prayer-filled discernment was around this,” said Karen West, Ontario representative on the Executive Board.

The other three services areas are implicit, said Dennis Wiens of Sunrise Community Church, Edmonton: “multiplying is what we’re about.”

“’Multiply’ is integral,” said Kelly Cochrane of La Salle Community Church, Man. “The whole gospel is to multiply, not to edify ourselves but to share our faith.”

Danny Unrau referenced Darrell Guder’s Missional Church premise that the church does not exist for itself but for its mission. A concern about ‘to multiply’ is that it sounds “like we’re serving ourselves,” said Unrau. “It feels too narrow to me. If we’re multiplying ourselves, we’re not being missional anymore.”

The longer version of the statement (“we exist to multiply….”) expresses an ecclesiological statement that should be reviewed by BFL, said Michael vandenEnden, Grantham MB Church, St. Catharines. “When we talk about who we are, it’s a bit far-reaching…instead of rooting who we are in something we do.”

Moderator Harold Froese noted an action item arising from the discussion that the terms “multiply” and “transformation” should be referred to the BFL to offer contextualization.

Willy Reimer, executive director, Canadian Conference of MB Churches: check out the ministry catalogue to see how CCMBC is fulfilling its ministry focus of helping to multiply leaders and disciple-making churches in Canada.

David Miller, chair, Board of Faith and Life: The BFL’s mission is to apply the confession of faith to life, to a broken world. Provincial conference ministers, provincial representatives, Members at Large, the CCMBC executive director, a C2C representative and an MBBS representative work to listen to each other and to the churches. “In the BFL, we want to experience relationship and prayer that models how we deal with these things together as a conference body as we seek to accomplish what God has called us to.”

Resources the BFL has recently produced for the churches include a study guide on sexuality and a statement on ordination.

The BFL also collaborates on the pastors credentialing orientation (PCO) and study conference, the next of which will deal with transformational discipleship in November 2017 in Abbotsford.

“We invite you to speak to us,” said Miller.

David Wiebe, executive director, ICOMB: When you hear of the international community of Mennonite brethren, remember, that includes you too, said Wiebe. “What does MB mean? It means love.” As you love and pray for your family, pray for ICOMB, Wiebe said. “Express your love for one another in this way.”

Gord Fleming, national director, C2C Network: C2C is in partnership with 22 denominations. Fleming addressed a number of questions swirling in the constituency about C2C’s operations

Randy Friesen, general director, MB Mission: “God is already at work; he is inviting us to join him,” said Friesen. He noted that the places in the word where church is paying greatest price to follow Jesus is where they share faith more frequently.

“Our mandate is global but we’ve done extensive discipleship training programs in North America,” said Friesen, suggesting the organization may move closer to those two national conferences to develop national strategy, expressing mission in new ways with resource sharing and mutual learning on the one mission.

The refugee crisis has brought opportunity to Canadians’ doorsteps to share their faith with people from some of the least reached countries — an example of global and national coming together. An experienced mission worker shared stories of the responsive hearts and miraculous provision he encounters as he interacts with the many Middle Eastern newcomers in the Lower Mainland. He used to be frustrated by seeing women wearing the veil, he said, but now he praises God because it instantly identifies with whom he needs to share the gospel.

Jim Davidson, interim CFO, CCMBC: Davidson reported that Legacy has been incorporated, the bylaws are completed, the directors are in place, an application for charitable status is filed. The next steps are to fill the board with interim independent directors to make sure everything is in place to fulfill governance requirements. 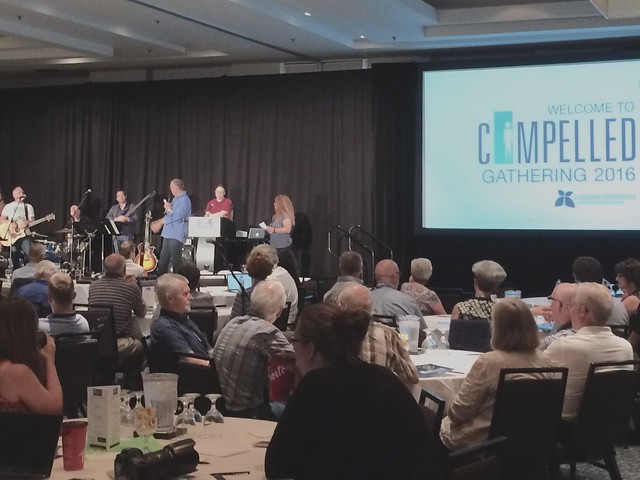