What's New
How sweet the sound
One MCC Thrift Store Began With a Few...
A Hunger for Conversation
Getting the mental and emotional rest you need...
The Patience of God
2023 Spirit of MDS Fund accepting grant applications
October 2022 update from the CCMBC Executive Board
Arnold Community Church hosts block party to thank...
When Spring returns
An autumn reset
Home News Gathering 2016 recap – Wednesday night plenary 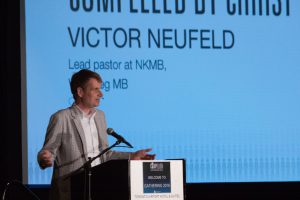 Victor Neufeld speaks on being compelled by Christ’s sacrifice.

“The goal of gathering is to create a space where community can happen,” said emcee Mandy Kasper of New Hope Church Niagara, St. Catharines, Ont., at the opening session of Gathering 2016, the biennial meeting of the Canadian Conference of Mennonite Brethren Churches.

Share your story, she encouraged delegates and guests. It may be what someone else needs to hear.

Adam Greeley of The Well Church, Dartmouth, N.S., shared his story from the stage. Originally from Newfoundland, he discovered the Radical Reformation in a church history class in Vancouver and was compelled by what he heard. Now he’s a church planter with the C2C Network in Dartmouth North, one of the city’s toughest neighbourhoods.

Greeley based his ministry on Jeremiah’s call to work for the peace of the city. It’s known as the parish model; Greeley calls it “taking spiritual responsibility for your area.” The Well has developed a respectful relationship with the local grassroots Take Action society.

“We take small steps of faith and God magnifies it.” Greeley asked for prayer as the people of The Well minister in the community, proclaiming the gospel as they go: for partners, for leaders, for perseverance, and for hope.

Judy Harms-Wiebe of Willingdon Church, Burnaby, B.C., shared how, having “set her face like flint” (cf. Isaiah 50), she resolutely trusted God to carry her through difficult periods in life: a bout of cancer, three daughters leaving the nest, and a time of uncertainty in her husband’s career.

My grace is sufficient for you, for my power is made perfect in weakness. “We have him, and he’s all we need,” she said.

Victor Neufeld of North Kildonan MB Church, Winnipeg, addressed the theme verse of the convention, 1 Corinthians 9:16. “How do you get compelled to share your faith?” he asked.

Turning to the David & Goliath story (when your MB church has a karate ministry, is using a violent Old Testament story so strange?), he admitted he more readily identifies with Saul and the Israelites in the story – who found their courage once David slew Goliath.

“When you know you’re saved, it’s pretty compelling to run onto the battlefield, saying ‘we won!’” said Neufeld. Jesus has conquered our enemies as David routed Goliath. “Victory is won; you’re forgiven. Even if you’ve failed, Jesus has already succeeded.”

Will that compel us to share the good news we’ve encountered in the person of Jesus Christ?

The next day’s proceedings will involve reports and breakout sessions and decision making, but “in the kingdom of God, all business is mission,” said executive director Willy Reimer.

Remember, you can follow the event on Twitter (#ccmbcevents) or even start a conversation about it in the comments field here.