What's New
Through the conflict, life carries on in Ukraine
A FOCUS on Mission
Must Patience Be So Slow?
Harold Jantz: A Heart for the Mennonite Story
Lorlie Barkman: A Life of Creative Engagement
Last Days, First Days
Women in Ministry: Bertha Dyck
January Moment in Prayer “Holy Spirit—Fill Us!”
The Church as the Patient Body of Christ
Advent: Making Much of Jesus: Christmas Day
Home News Young leader from The Well tests the waters 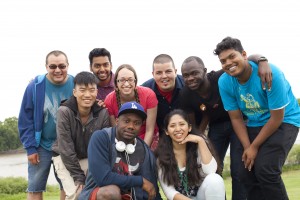 This past summer, after eight years of training and work in early childhood education, Erika Goode felt God calling her away from what she was familiar with.

Seeing the leadership potential in the strong yet humble young woman with a heart for worship, pastor Adam Greeley of The Well, an MB church plant in Dartmouth, N.S., recommended Goode apply to the program. June 1–Aug. 24, 2015, Goode received a stipend through MCC and The Well to serve the church full-time.

Goode was excited about the opportunity to do mission in her community while receiving training and support from The Well’s pastor Adam Greeley and MCC.

“I’d no longer be able to float along in church, but would have to take risks and step out into the community,” she says. 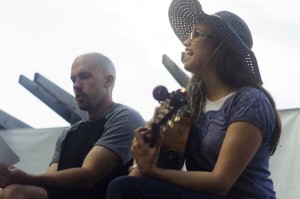 Erika Goode (right) leads worship in song with Ben Macdonald during her Summerbridge internship at The Well church.

A one-week orientation in Winnipeg introduces Summerbridgers to MCC and the “how and why of being the hands of Jesus,” says Tuininga. Sessions focus on MCC’s values of service, peacemaking, social justice issues (domestically and abroad) and conflict resolution skills. Throughout the internship, participants meet regularly with their mentor, usually their pastor.

Goode led worship services, volunteered at church members’ community barbeques and met individually with as many congregation members as possible “to ask them what they envisioned for The Well,” says Goode. “I created a lot of space to listen.”

Goode learned that disciple making “happens during the natural rhythms of life” – over a meal or ball game. When she discovered Greeley’s neighbours needed help getting ready to move overseas, she organized a team of young adults to paint their house. “That opened a door for them to see Christ at work in me,” says Goode.

“Evangelism doesn’t have to be a big event where you ‘sell’ Jesus,” says Greeley. “The gift of evangelism is watching Jesus drawing people to himself, seeking the heart of God for people.

Being raised in the church, Goode hadn’t spent a lot of time with non-Christians. “I learned that the community of Darthmouth North has a lot of prostitution and criminal activity, and a high percentage of children drop out of school.”

Goode built on Greeley’s relationship with Take Action, a grassroots network of local mothers working at providing hope for their children.

The connection began when Take Action’s “matriarch” Roseanna asked Greeley to bless their community garden in May 2015. Afterwards, Greeley emailed her for permission for his life group to meet in the garden.

He recalls, “Roseanna wrote back, ‘Our kids really need to know about Jesus, so I sent your email to the community; everyone from Take Action will be there.” Thus began Family Games Night: every month, The Well and Take Action meet in the garden for a meal, a gospel story conversation and games. Goode led worship and played games with the children.

“People would gravitate toward her,” says Greeley.

“Thankfully, there is a group of women trying to make a difference,” says Goode. “I’m even more grateful that they have reached out to our church community and invited us to their gatherings.”

Growing as a leader

“Erika is super teachable,” says Greeley. “She’s invested in meeting with people and drawing people together.” She drew new people to The Well, such as a family new to Canada whom she met at the park.

Goode may have felt like she failed at some of the new things she tried, says Greeley, “but I saw her grow in the realization that her identity is not in what she does but who God made her to be. Life is full of setbacks, and we grow in the midst of that.”

“Summerbridge was the right catalyst,” says Greeley. “Without the grant, she couldn’t throw herself into serving the church in that way.”

“I learned that disciple making is a huge life commitment,” says Goode, “and that my church, though small, can do a lot.”

“A good leader encourages others to lead and doesn’t always have to be in the spotlight,” says Goode. “I hope to continue to grow to be a servant-leader like our perfect example, Jesus.”