What's New
Through the conflict, life carries on in Ukraine
A FOCUS on Mission
Must Patience Be So Slow?
Harold Jantz: A Heart for the Mennonite Story
Lorlie Barkman: A Life of Creative Engagement
Last Days, First Days
Women in Ministry: Bertha Dyck
January Moment in Prayer “Holy Spirit—Fill Us!”
The Church as the Patient Body of Christ
Advent: Making Much of Jesus: Christmas Day
Home News Respect, peace and gospel grow at church-based dojo 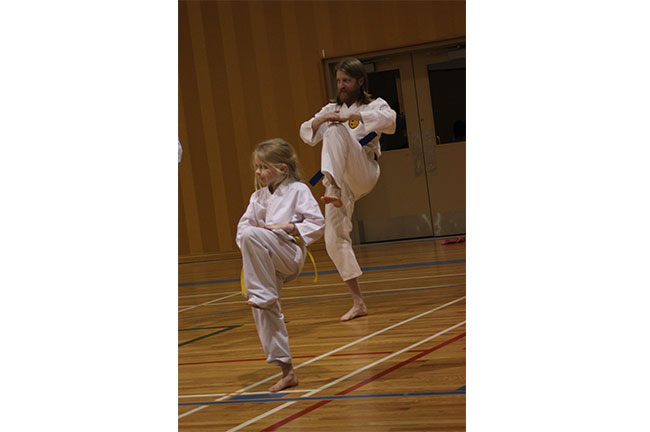 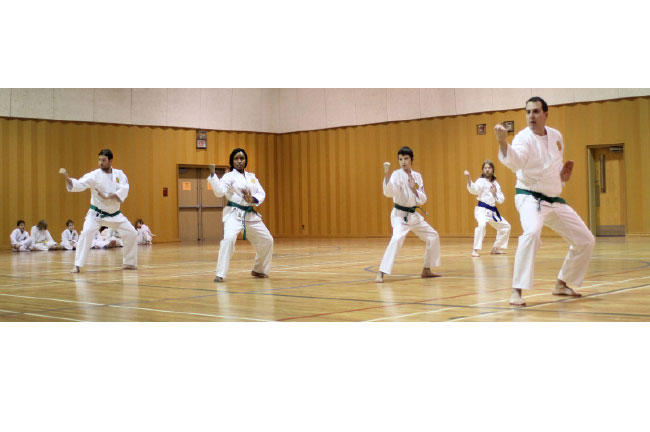 Rows of children and adults dressed in white stand respectfully, focused, hands together in a posture of prayer. A precursor of heaven? Not quite, but the karate class at North Kildonan MB Church, Winnipeg, is a place of discipleship, community and gospel witness.

In 2012, NKMB member Kelley Ewert was looking for an activity to do together with his young sons that would build their confidence and provide positive role models. His co-worker Deo Namwira, a Christian committed to Anabaptist beliefs – and a certified karate sensei (master teacher) – encouraged Ewert to train at Namwira’s dojo in the south of the city. Intrigued, Ewert started a conversation with then-small group ministries pastor Ben Harapiak that resulted in starting a dojo right in their own church.

“Everybody assumes karate is about violence, but it is always defensive – always starts with block. There’s a pacifist point of view to it,” says Ewert.

“We’re learning how to train our bodies and our souls and our minds,” he says, evoking Paul’s athlete analogy in 1 Corinthians 9:24–27.

A sport for peacemakers

Harapiak, whose eyes light up when he talks about karate, says, “People who know how to fight don’t; they stop fights. We want to teach people how not to fight – and we want to build Christian community.”

The practice of karate has given Harapiak confidence and health, but even more importantly, “it’s something we’re doing here in our church that’s bringing us back to our relationship with God.”

Consisting of newborns, centenarians and everyone in between, NKMB puts a high value on togetherness, and that is evident in the dojo where some 45 men and women from age 5 to 50 participate together, each at different levels. Ewert is there with his two preteen sons; another early adopter trains alongside his children and wife.

The multi-generational aspect is wonderful, Harapiak says. “Because we train together on the floor, it brings a sense of equality.” Since the dojo began, his role at the church shifted to the youth portfolio, which has brought a richness to his interactions with fellow students. “It’s very neat for me as a youth pastor to be taught karate by a 10-year-old,” he says. The young people learn that “respect goes both ways…and it builds their confidence too.”

A word of faith and salvation

Growing up amid the brutality of conflict-ridden eastern DR Congo, Namwira brought together his Anabaptist faith with the practice of karate to withstand the violence in his neighbourhood. Now, it’s an activity his family does together. His daughter Johise, 16, also a black belt, helps with instruction at NKMB.

By phone from Ottawa where he is temporarily finishing doctoral studies in international development, Namwira explains that the five major principles of Meibukan Goju Ryu karate are also rooted in Scripture: refrain from violent behaviour, seek perfection of character, endeavour to excel, be respectful, be faithful. “It’s about goodness, love, respect for others – emphasized at the beginning, the end and as you train,” he says. “In karate, I always spread the word of faith and salvation.”

Harapiak cultivates these connections between karate principles and Christian faith with a weekly devotional during the water break. The students gather in a circle on the floor as Harapiak shares from Scripture. “It’s surprisingly easy to tie in,” he says. A recent lesson came from James 1:19–20: be quick to listen, slow to anger.

“Two major reasons we fight are fear and anger,” says Harapiak. “The fear we can learn [to deal with] from karate; the second is a heart issue between us and God. We learn to take anger to God, leave that at the cross.”

NKMB’s long-range goal, once several core members are sufficiently trained to offer instruction, is to open up the doors to the wider community – neighbours who are middle class or struggling socio-economically.

“Karate is cool, it’s a draw. When you see it done right, you know you want to do that,” says Ewert. NKMB’s karate community builds not only confidence but also healthy relationships. “Lots of kids in the neighbourhood could use a place like this.”

In the meantime, the dojo has opportunity to witness in the tight-knit Goju Ryu community. When the president of the association from Japan visited, he sat in the circle with the other students and listened to the Bible teaching. “It was a very neat experience to have Sensei Akihito sitting in the circle with us as I shared the gospel,” says Harapiak.

When attending a karate event or visiting another dojo, NKMBers wear their uniform complete with a Karate for Christ patch. Ewert points to the eagle on the patch: “You soar above. It speaks volumes about peace, non-confrontation.”

Worship where it is due

Enjoyed the article and description thoroughly. As a member of the dojo since the beginning I have really been struck by the way we were immediately welcomed into the larger community of karate and shown respect. It has led to some great relationships and friendships forming, and to some people daring to come back into a church setting after many years of absence. Thankyou. Matthew Schmidt