What's New
How sweet the sound
One MCC Thrift Store Began With a Few...
A Hunger for Conversation
Getting the mental and emotional rest you need...
The Patience of God
2023 Spirit of MDS Fund accepting grant applications
October 2022 update from the CCMBC Executive Board
Arnold Community Church hosts block party to thank...
When Spring returns
An autumn reset
Home Life & Faithfeature articles The promise stone 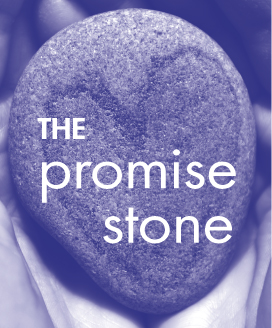 Some summers ago, I was part of a “two or more” group – a strange title for five women summoned by a friend to prayerfully watch and listen to the life forming inside her.

We prayed because this developing baby was God’s handiwork, bearing his image. We prayed because we believed Jesus was in the midst of the two-or-more of us. We prayed because our friend had experienced the anguish of two miscarriages, and possessed enough medical knowledge to deplete her little miracle of all its wonder.

She sat me down in her living room, excitedly requesting my participation in this nine-month adventure of hope. She desired to open her soul to a circle of “sisters,” to risk joy or sorrow together. Mystified by her immense courage and steadied by her grace, I recognized I was entering a holy moment with this little band of followers.

My friend had been a collector of rocks since childhood. She delighted in their odd shapes and in the nuance of colour – this was the language of creation that spoke to her soul. But the stone she cupped carefully in the palm of her hand was not part of her playful collection. God had chosen this symbol, she believed, like a sky full of rainbows, to deliver his promise of care.

She described her conversation with God as we stood in her kitchen, cooled by the summer breeze that pulled through the open windows. With an uncomplicated candour, she explained how she had asked for a sign, a divine acknowledgement, to help her understand if her dream of birthing a child should be buried or kept alive. Expectantly, she requested of her heavenly father a stone – not just any stone, but a designer stone. It would have a graduated colour sequence, unlike the two-toned stones common in the area. It had to be outside the realm of possibility.

The day of discovery

In the days that followed, she had gone for her usual walks with her husband on nearby trails. But the day of her discovery was different. Alone with God, she welcomed unrestrained tears, like those that poured forth long ago from a distraught woman in the house of the Lord. Inaudible anguish, translated into groans by the Holy Spirit, expressed the deepest desire of her heart to her all-knowing companion.

Somewhere in the reaches of her soul, she discerned the directive to cross to the other side of the road. Following in the steps of the bewildered disciple whose Saviour instructed him to cast his barren net one more time, she obeyed. The falling rain mingled with her tears as she walked with mindless familiarity along the well-worn pathway.

Then, her eyes lit upon the shimmer of a tiny, circular, tri-coloured stone. It had the exact markings she had longed for. Faith inflated the collapsed places inside her like helium. Hope was kindled.

Mesmerized by her story, I felt the swelling of faith in my own soul. Like the woman who encountered unexpected intimacy at a Samaritan well, my friend had been enveloped by the extravagant love of Jesus on a country road. Now, she was telling her village – telling me – her experience of divine mattering. My naked feet stood on a sacred moment in this unlikely sanctuary.

Several weeks passed. Then one morning, we were asked to pray: the medical report signalled complications. Days later, “two or more” was informed that the little life had stopped growing. This would be the last letter to the two-or-more group – a sorrowful benediction on our shared adventure.

What would become of the stone? I wondered. Did its bedside home trigger reminders to taunt her grief? Did it still reside in her collection of wonder? I imagined she may be tempted to toss it in with the ordinary rocks, or throw it out – a memory too painful to visit.

But what if she found the courage to cup it gently and hold it close to her heart? What if she dared hear the whisper of her heavenly father in the agonizing silence, telling her she is cherished, cradled and carried forward by his presence? The stone was an ancient message etched with his signature of faith, hope, and love – a trinity of colour. It was a reminder that God is the rock of ages, the rock of her salvation, the cornerstone of faithfulness in the rubble of her dreams.

Beyond the dimensions of her requests or the reaches of her imagination, God would beckon her to new adventures of hope. Therein lies the promise.

Jan Woltmann is a freelance writer from Winnipeg who attends The Meeting Place. Two years after this story was written, the author attended a baby shower for the healthy boy born to this courageous mother. She kept the stone.