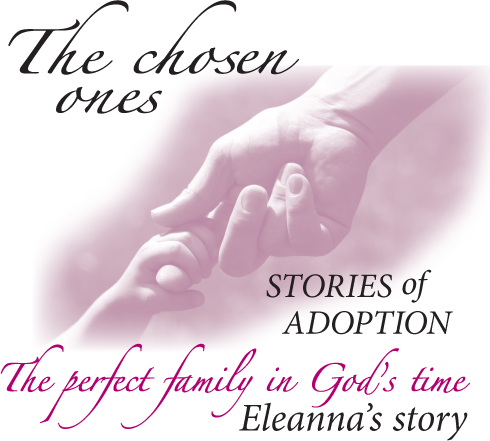 “In their hearts human beings plan their course, but the LORD establishes their steps” (Proverbs 16:9). After getting married in December 1996, Andy and I began planning our course. We decided 3 years was an appropriate length of time to wait before beginning our family of five.

In August 1999, we were in the process of applying for a full-time overseas mission when I became pregnant with our first child. We were overjoyed at the timing. Connor was born in the U.S. in 2000, and by January 2001, we were established in Thailand. Though navigating the transition as a young family was trying at times, we felt we were in the centre of God’s will for our lives and family.

Though we knew cultural transition and other factors, like the constant high temperatures, would add stress, we hoped to have our second child during our first year of language study.

We didn’t anticipate problems. After hoping for one year, however, we had not conceived. Saddened and afraid that our dreams for a family were threatened, we sought medical counsel. After a series of tests, the doctor gave the results: polycystic ovary syndrome – one of the leading causes of female infertility.

Shocked, we cried out to God for his intervention as we realized the impact on our family plans. But God directed our steps, bringing a friend from California who challenged us with Psalm 16:5 as we shared our grief: “Lord, you have assigned me my portion and my cup; you have made my lot secure.” Could I believe that God was orchestrating our family according to his assigned portion for us? Would I be secure with my cup if it was different than my expectations?

We wrestled for many months over these questions, wondering if trusting God’s plans and hoping in him meant not taking action to counteract the infertility issues. After praying together with our team, family, and friends, we felt peace about pursuing medical help. I began a series of fertility treatments, followed by a procedure called intrauterine insemination (IUI). A few weeks later, we sat optimistically in the doctor’s office, expecting to hear of God’s power at work in my body, leading to our second child. Instead, “negative” dropped from the doctor’s mouth. My family dreams were shattered and my hope robbed.

“Nothing has ever prepared me for the fact that I may not have the family I longed for,” I wrote to my parents. I spent the next week in tears, crippled by broken dreams, confused by God’s apparent distance. The following week, however, hope was restored when a return check-up yielded the word “positive.” In March 2003, our second son, Isaac, meaning “laughter,” was born. We joyfully shared his miraculous story, wanting others to know of God’s sovereignty over his life. But in my heart, I wondered, “Would God do it again?”

By June 2005, we had hoped and prayed for a third and final child for 2 years. We pursued the procedure (IUI) once more but it didn’t “take.” Tired and lacking hope, we didn’t have peace to try that route again.

But God had been guiding our steps and making us ready. At a renewal and restoration retreat that fall, I heard Andy whisper as we were falling asleep, “I’m ready to adopt.”

The previous year, I had found an abandoned 4-month-old girl in our local Thai hospital. Through a series of miraculous events, I was able to gain custody of her, and bring her home for one week. After that, it was clear we weren’t both ready to claim her as our own, so I arranged for her to be fostered and later saw her adopted into a caring home. Now Andy was ready to adopt. Was I?

I had wanted that Thai baby, but pursuing adoption now meant relinquishing my hope of carrying another child in my womb. During the remainder of the retreat, God spoke to me through dreams and the words of others. If adoption was God’s portion for us, I was ready to receive it.

Our January 2006 email update read: “Went to the department of social development and welfare today and picked up the detailed [adoption] application.” We were at peace to follow the track to adopt our third child in Thailand.

Later that month, a surprising update: “God has a sense of humour! The day after getting the paperwork from the social welfare office in Bangkok, we found out we were pregnant! Baby #3 is on the way.”

Over the next month, more emails followed: “I started bleeding today, and went to the doctor. I’m six weeks and four days along. No fetal heartbeat, though the fetus has developed since the last visit. I’m trying to trust in God’s sovereign plan.”

“Thanks to many of you who rejoiced with us. Unfortunately, we lost the baby on Monday. We felt like this was truly a miracle child, so it’s difficult to take. Psalm 34:18 has been a comfort.”

“I’ve cried pretty much straight since Monday morning when I started bleeding. It’s Friday afternoon, and I’m numb. I have seen God work before, around, after. I don’t understand why he didn’t work in.… I can praise him for my salvation (Psalm 13), but it’s like my faith is in sections right now, and one section isn’t yet over the angry, disappointed part.”

“My heart physically hurt. I loved this baby so much already. We’d heard promises from God, and the team had prophesied over him/her. What happens to those prophecies and promises? I finally asked the nurses for pain reliever to just allow me to sleep.”

Returning to the U.S. for MINA (Ministry in North America) that summer, we processed the year’s losses with close family and friends. Back in Thailand, we completed our file with the local social work department. “It will be a year before your daughter comes home,” the social worker told us in October. At that point, we’d waited so long for our beloved third child, one year seemed very hopeful.

October 2008 passed, then October 2009, and the daughter we’d dreamed of was still not in our arms. Wearied by the journey, I struggled to know whether God was determining our steps, or had simply challenged me to a battle of trust for the past six years. I poured out honest cries to God, and his answer penetrated the boulder in my heart. “Is your hope in me? Or in my answer?”

“In the valley, of the shadow/I will wait…” began a song I wrote as the journey drew long. “I will rejoice/For you are my King…. Your mercy flows, for all my days/And I will wait…. You are faithful.”

On November 17, 2009, we got the news by cellphone while travelling in a rickety van on rough Thailand roads. “You have a daughter!” As our social worker said those words, a wave of peace rushed over me, along with God’s assurance that this news would not end in disappointment. We gave thanks as a family and with our teammates.

After nine visits to see our beautiful daughter, we brought our third child, Eleanna Jaytiya-Joy, home on February 19, 2010. In my heart, I had planned my course 14 years ago. In God’s sovereignty, he has led, and continues to lead me through steps of hoping in him, waiting on his timing, and trusting that he is good. 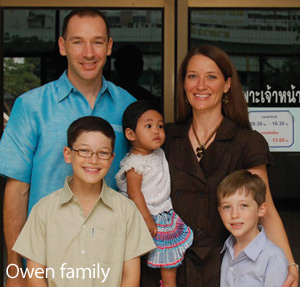 Carmen Owen is a church planting missionary serving with MBMSI in Thailand.

What makes a missionary family?