What's New
Leading through the trauma of covid: Part two...
Ask God which town
Where to from here?
CCMBC National Director attends 2022 ICOMB Summit
MCC Canada and MCC Manitoba sell shared property...
The world appears to be growing darker
Sharing a new and unified language
6 reasons to attend the MWC Global Assembly...
One too many
Just one more
Home Life & Faithfeature articles It’s not about adoption; it’s about the gospel 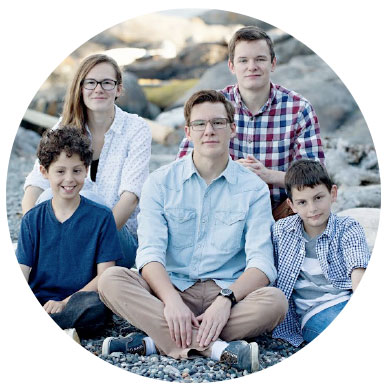 “I don’t feel like a Christian can listen to those words of Scripture [Galatians 4:4–7]…without thinking about those kids in our country, our city or our neighbourhood who need a family,” says C2C Network church planter and adoptive father Joe Haynes.

“Heather and I became convicted that if we really do trust Christ for everything we need, then our lives are his,” says Joe. “God has adopted us through Christ into his family. The more we became confident in how much the gospel makes a difference in our lives, the more the word ‘adoption’ kept coming to our minds.”

Joe and Heather Haynes have been married for 19 years. In October 2013, they had three teenaged children, Daniel, Josiah and Bethany, and they had just launched a church plant, Beacon Communities, Victoria. “We had it pretty good,” he says. “We had a nice, harmonious family life. We had a pretty comfortable routine with lots of free time; everyone was able to take care of themselves.

Almost a decade ago, Joe and Heather began to talk about fostering, but there were plenty of excuses. In 2011, they signed up for foster parent orientation classes, but quickly realized “both of us felt quite strongly we were not called to foster but to adopt. And both of us were slightly terrified by the idea.

“I believe God was changing our hearts. It was not what we would have chosen, but we became strongly aware that God was choosing us for it.”

So, in early 2013, they went through classes for prospective adoptive parents, and in April 2013, signed papers to start the process to match with children. They expected it to take two years; instead, the process flew by. By fall, “we were sitting down in a table in an office in Victoria talking with social workers about two little guys named Dillan and Shelden and we hadn’t even caught our breath,” says Joe. The boys, aged 9 and 10, became part of the Haynes household in November.

“It seemed like when God decided to put those things together, everything kept falling into place much more quickly than we expected.”

In contrast to the speed of arrangements, the adjustment has been “very painful and very hard for our whole family, including our birth children.

“There’s often a grieving process for kids who get adopted – especially with older kids – because their life has been turned upside down,” Joe says. “We didn’t fully appreciate that.”

New eyes for the gospel

There were a number of factors, many centred around lack of preparation, that made the change especially difficult for Dillan. “So he fought like any kid probably would,” says Joe. “I never expected that.”

In the midst of hard knocks and bumps from 10-year-old fury, Joe saw the gospel in a new way.

One evening in particular stands out in Joe’s memory. Something had piqued Dillan’s frustration; to prevent him from harming himself or someone else, Joe wrapped his arm around the boy while Dillan struggled.

“It’s amazing how much harm a little, scrawny 10-year-old boy can do. But I felt a presence of mind settle on me. I understood right at that moment – although it was painful – this was really important,” says Joe.

“I’m sure it was the Holy Spirit who led me to respond to him as he was screaming and kicking at me and talking about how he would rather be anywhere else,” says Joe. “I realized that he needs to know the same love that God has shown to us: grace, not something that we’ve earned. Even though we rebel against God all the time, God never gives up on us. Dillan needs someone in his life to begin to show him that truth.”

It was an excruciating moment for everyone in the family, but it also became a sort of watershed.

“That was just as much evangelism as standing with an open Bible talking to someone on a street corner,” says Joe.

In spite of their intense moments of conflict, Joe sees God’s hand in bringing the boys into the Haynes family. “It’s not an easy match, but it’s a good match,” he says.

“I had a strong faith before in God’s sovereignty. And that has been important for me to give me hope,” says Joe. “I’ve seen Dillan angry and resistant and not wanting me to be his dad, wanting to go back to his foster mom and not understanding why these things have happened in his life. To see in his little face such hostility – God showed me that’s a very clear picture of the way I treat God all the time.

“Every time I turn away from God; every time I look for significance or meaning or happiness somewhere other than God, then I am rebelling against him. So many times I’ve directed my anger at God and he continues to be patient and loving with me, and he says, ‘Joe, I love you.’ “It is so humbling to see in a boy’s anger a picture of our rebellion toward God.”

The greatest joys of the Haynes’s adoption experience are often entwined in the biggest challenges.

“God’s had to teach us to trust him,” says Joe. “Heather with a different reality than she expected; me as I look at the way things have actually turned out and have different kinds of worries and fears.

“When we are called to love someone else, not for what they give to us but because of what God wants to do in their lives because he loves us, that sacrifice is sometimes very painful,” says Joe. He’s watched Daniel, Josiah and Bethany realize “the truth of the gospel calls us to sacrifice the things we would prefer for the sake of the things that are most important.”

His teens are experiencing the truth that growth comes through pain.

“The redemption of God’s people through the death of his son is painful but glorious,” says Joe. “All the three kids have come to see that and lean into that and take a step toward that truth. It makes Heather and me very proud.”

The teens acknowledge learning to love two new little brothers has been much harder than they thought, but when asked if it was it the wrong decision, they were decisive: absolutely not.

“Now things have settled down to the point where it’s about as hard as I expected it to be,” says Joe. “But it’s taken a long time to get this good.”

Through the process of adoption, the family has grown in many ways. Joe and Heather have not only opened their household to two boys, but to the members of the boys’ family of origin.

The Haynes clan has shared meals with the boys’ birth father, birth mother and grandfather.

“It’s important for the boys to know that they have a past,” says Joe. “We have faith that God is using the gospel to change their future story, but they need to know where they’re coming from, so they aren’t filled with fear.”

As Joe and Heather were building a new iteration of the Haynes family, they were also building a new community of God’s family. And the church has learned alongside the family.

The Haynes family has invited the boys’ birth grandfather to some of Beacon’s regular supper parties.

“To see the church come around him and respect him and love him and build relationships with him has been great. “We have been able to talk about the practical difference adoption makes,” says Joe. “To see people in the church make small steps to show someone tangible love in the name of Jesus – and to know that our adoption story has been part of being able to see what that looks like – is very encouraging.

“It’s also been a good picture for the church as we talk about wanting to be a church that cares about our city,” says Joe. “But we don’t mean some evangelistic crusade where we hand out flyers about Jesus on the street. We mean we’re hoping that God will give us an actual love for those in the city who are vulnerable.”

Joe challenges people in churches to live out the implications of God’s love for them. “As the worldwide body of believers through history, we have not been left on this planet just so we can pursue our own agenda, our own desires, or to live lives in isolation,” says Joe.

“We have been left here to give glory to God and make the gospel known about Jesus – who he is and what he’s done to save sinners to bring them to glory; to redeem not just individuals but to redeem a whole people from among the nations for the earth.”

God has plans for the future “we can barely imagine,” says Joe. “Adoption is a big part of that.

“Not to pit one area of need against another, but I think many Christians have no idea how many kids in our own country in our own province are waiting to be placed with adoptive families.”

“I pray that the church will wake up,” he says, speculating that the number of children waiting for adoption would disappear if people in churches across Canada would provide loving homes for children in care. “It’s not about adoption; it’s about the gospel,” he says. “How many other areas are there where, if the church would really engage, we could make a huge difference, not just with the needs of our country, but pointing people to the God who meets our most permanent needs through Jesus?

“Consider how God is calling you through the gospel to not only make a difference in someone’s life, but to point people to Jesus, our Saviour,” Joe challenges Christians. “We could not begin to imagine how God could change our country through testimonies like that.”

OVPCC: “where we need to be”

One small correction: our Adoption Education classes were in early 2013.

Thanks for the correction, Joe. The story has been adjusted.