Mommy and Daddy sitting in a tree, k-i-s-s-i-n-g. First comes love, then comes marriage, then comes Mommy with a baby carriage.” This familiar playground rhyme encapsulates the way most people expect life to unfold: meet, marry, multiply.
But what happens when the baby carriage remains empty? Where can we find comfort when we’re hit with the heartbreak of infertility? For Christians, that place is God’s Word.

Many biblical women struggled with infertility: Sarai, Rebekah, Rachel, Leah, Samson’s mother, Michal, Hannah, the Shunammite woman, and Elizabeth. In many cases, God used the infertility for a purpose. Women, such as Sarai (Genesis 16–21), Hannah (1 Samuel 1), and Elizabeth (Luke 1), had long given up hope of ever conceiving, when God proved he was able to do anything. He gave them not only a child, but one set aside for his special purposes. Through the pain of infertility, God was able to glorify himself.

In Abimelech’s household (Genesis 20), barrenness served as a form of discipline – not for the king’s wife and servant girls, but for Abimelech. When the king recognized and repented of his sin, God removed the punishment and allowed the women to once again bear children.

Sometimes we don’t know why a womb is closed. Michal, Saul’s daughter, never bore any children, but we’re not told why (2 Samuel 6:23). We could surmise it was because she held disdain for David and his exuberance in dancing before the ark, and thereby offended God.

Perhaps it was because God didn’t want a descendant of Saul to challenge the throne. It could also be because Michal lived, like us, after the fall – in a body that doesn’t always function as it should.  Disease, mental illness, and infertility are just a few of the ways our physical bodies reflect the fallen state of humanity.

According to the Infertility Awareness Association of Canada, international studies estimate that one in six couples struggle with infertility (not being able to get pregnant after one year of unprotected sex). The statistics increase to one in four couples for those over age 35.

In the U.S., the National Center for Health Statistics suggests this infertility rate has remained steady since 1965. Yet, despite this consistent rate, there is a misconception that the infertility rate is on the rise. Sonya Norris, from the Parliamentary Research Branch (PRB) of the Library of Parliament, attributes the perceived rise to more open discussion, media attention, an increase in fertility specialists, greater availability of fertility drugs, and fewer infants available for adoption, prompting couples to seek fertility treatment.

But a stable infertility rate is no comfort to those longing to be parents. And for the 10–20 percent of couples who find no medical reason for their inability to conceive, it’s like salt in the wound. This leaves many couples asking God, “Why?”

Within the Christian community, there’s much controversy surrounding infertility treatment. Couples facing infertility not only battle emotional highs and lows, but are also caught up in a political and moral debate. To gauge the temperature of the dispute, one only has to dip a toe into the blogging world, where fertility and infertility are discussed openly (and sometimes hotly).

Many wonder if it’s wrong to treat infertility at all. Does treatment replace God, the creator of life, with modern science? Do we use science to glorify our own needs and fulfill our desire to play God? Or does God expect us to use (and benefit from) scientific advancements? Where does personal responsibility start?

If a couple decides to pursue treatment, there are many options: in vitro fertilization (IVF), surrogacy, herbal remedies, hormone drugs, surgery, artificial insemination, and adoption. But there’s also debate about which of these methods are biblically acceptable and which aren’t. The options are all socially acceptable, but what sets the bar for a Christian? An infertile couple will grapple with many questions, and must find answers before being able to move forward.

Modern-day women aren’t the only ones who struggle to determine when it’s right to wait for God and when it’s right to move forward with his blessing. Sarai tried to “fix” her infertility on her own strength. Although God promised to give her and Abram a child, Sarai, grief-stricken over her apparent barrenness, gave her servant Hagar to Abram, resulting in the birth of Ishmael. However, God hadn’t forgotten Sarai. Once Sarai had passed childbearing years, God gave her a child and established his everlasting covenant with Isaac and his offspring (Genesis 17:15–27).

When Rachel and Leah offered their servants to Jacob to bear children on their behalf, it created animosity, competition, and bitterness between them and between their children. All the actions of these biblical women were socially acceptable, but they appear to have hindered, rather than helped, the situation.

How should a Christian respond to infertility, or any disappointment in life? First, we must commit our desires to God in prayer. “Isaac prayed to the LORD on behalf of his wife, because she was childless. And the LORD answered his prayer, and his wife Rebekah became pregnant” (Genesis 25:21). Hannah never gave up praying for a child (1 Samuel 1).

Second, we must continue to serve God (2 Kings 4:8–17). The Shunammite woman didn’t allow infertility to dictate her life. She served Elisha without any expectations. She urged Elisha to eat (v. 8) and made a room for him on her roof (v. 10). When Elisha offered the woman a chance to present a request before two of the most powerful people in the land – the king or the commander of the army – she refused, stating she had no need for their help. Gehazi, a servant, finally told Elisha the woman was childless. One year later, she was embracing her son.

Yet, neither of these examples is meant to imply that fervent prayer and faithful service will result in pregnancy. The biggest question for an infertile couple to answer is, “Will I love and serve God if the answer is no?”

Infertility arouses a curiosity in others that can border on intrusive. Concerned friends often develop a sense of entitlement, and “open the bedroom door” by asking embarrassing questions. Despite good intentions, flippant remarks can make a painful situation humiliating and belittling.
Blogger Laura Massa wisely wrote that it is not your words an infertile friend most needs; it’s your ears.

If you desire to walk alongside a couple facing infertility, the book of Job offers some insights regarding the role of a supportive friend. Infertility is a loss. It’s the loss of a dream. It’s the loss of an assumed future. And, like every loss, it will be grieved.

Job experienced loss. He was stripped of his children, servants, livelihood, home, and eventually his health (Job 1–2). Job’s three friends tried to console him. At first, they grieved silently alongside him – the only time they responded properly (Job 2:11–13). Silence is wise. In times of deep grief, cheap words are not helpful. What helps is the presence of genuine friendship and empathic silence.

When a woman is in the midst of attempting to treat her infertility, each month births new hope. Each unsuccessful month in which she anticipates conception has the potential to thrust the woman into despair. During this draining, continuous cycle, we must offer our ears and
our presence.

Eventually Job’s friends asked a question common in the midst of tragic loss: “Why?” They made some severe declarations, which bear a striking resemblance to the statements made by many modern-day comforters. The friends claimed that suffering is the result of past or current sin (ch. 4), that suffering reveals a proud heart (ch. 25), and that suffering proves you’ve ignored God (33:14–24) and failed to depend on him (8:14–15). Job’s friends based their simplistic answers on faulty assumptions, resulting in trite biblical half-truths.

We mustn’t assume we know why God has allowed the sorrow of infertility in a couple’s life. Suffering happens in a fallen world invaded by sin. Calamity strikes both the just and the unjust.

Childlessness can be a roller coaster of emotions, and a good friend can ease the turbulence. So, how can a good friend respond to the shattering news that the long-held dream of becoming a parent is lost?

Don’t keep asking a childless couple when they will start having kids. Maybe they can’t. Do ask about other areas of life that provide enjoyment.

Don’t offer cliché advice such as, “Just relax,” “Take a vacation,” or “Try this new herbal remedy.” Do give encouragement and offer friendship.

Don’t push. It’s a personal matter (even if it is a family member). Do offer support and remind them of your prayers.

Don’t give false hope. The couple may never have children, and we don’t know what plans God has for their future. Do remind them we serve a good and gracious God who hears their heartcry.

Don’t suggest they adopt or try IVF or any other method to enlarge their family. They will consider their options and make their own decisions. Each supposed “quick fix” is challenging, emotionally draining, and comes with its own set of struggles. It’s not as simple as many assume. Do remain available to listen.

Don’t assume the couple is interested in your own experience with infertility. Do ask if you can share, and then keep it simple. If they have further questions, they will ask.

Don’t complain about your kids, or say how lucky the couple is to be childless. Do remain focused on your friend when he or she is sharing with you. 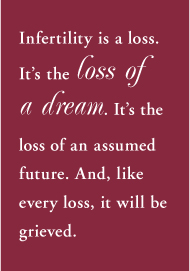 No two experiences with infertility are identical, nor are the reactions. However, compassion is always crucial when discussing this personal and sensitive topic.

Stacey Weeks lives in Niagara-on-the-Lake, Ont., and is a member of Orchard Park Bible Church. As one half of an infertile couple, she readily sympathizes with the desire to have a family. 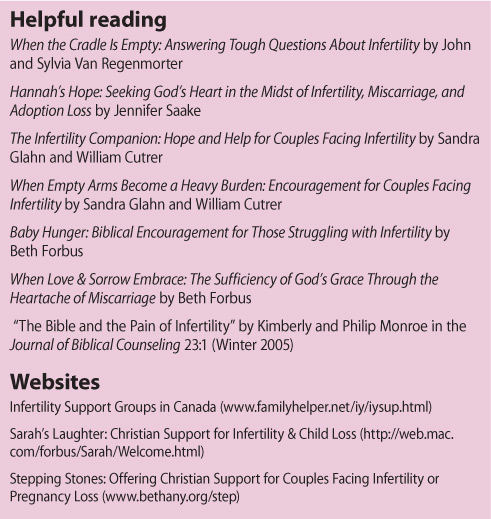 Childbearing pains of a different sort