What's New
“Any chance you might be expecting a goldfish?”
Abortion, the image of God, and faithful witness...
Choosing motherhood: The sacrifice of honouring life
MWC Assembly small but full of joy
Bad back doesn’t hold back MDS volunteer
Transition in CCMBC National Faith and Life Leadership
Leading through the trauma of covid: Part three...
The church distracted: When the main thing is...
Remote wilderness rescue turns into service with MDS...
How open is your mind?
Home Life & Faithfeature articles The harvest is plentiful (and so are the workers)

The harvest is plentiful (and so are the workers) 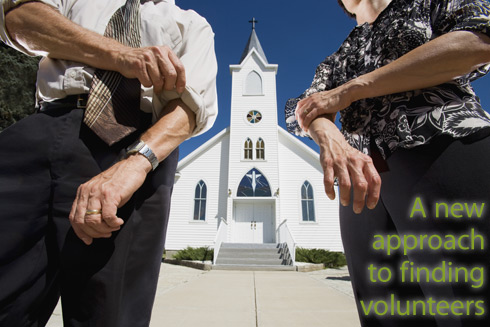 We’ve all been there – sitting in the pew as the announcements are read. At one point or another, one regular announcement goes past the usual “blurb” to being a full-length sermon. Volunteers needed! Throughout the year, we hear invitations, pleas, and sermons about getting involved. We need to use our gifts, get connected, be the body, and serve others.

With all this talk about volunteering, and the many opportunities to respond, we have to wonder why so many churches struggle to engage people in the work of ministry. We hear Jesus’ words, “The harvest is plentiful but the workers are few” (Matthew 9:37) and soberly nod in agreement thinking, that’s just the way it is.
Wouldn’t it be great if we could go from having a waiting list of positions to be filled by volunteers, to a waiting list of volunteers ready to fill positions? It is possible! In fact, it’s not only possible but probable, with some slight adjustments in vision and one key, practical skill at play. The harvest is indeed plentiful and so are the workers.

Adjustment #1: Engagement is not an option

The whole concept of volunteerism in the church seems a little unbiblical, because it makes engagement sound optional. In many of our churches, this idea of volunteerism being optional is supported by a buffet table of tasks for people to choose from (or not).

But when Paul talked about God’s people being equipped to do works of service (2 Timothy 3:17) he wasn’t thinking it was optional nor was it a mere task. No, he wasn’t thinking about what constitutes most of the activity in our churches today. He was thinking about people praying and being together in such a way that “the body of Christ may be built up until we all reach unity in the faith and in the knowledge of the Son of God and become mature, attaining to the whole measure of the fullness of Christ” (Ephesians 4:12–13).

Paul understood that everyone was to be involved, hence the connection between his teachings on spiritual gifts to his teaching on what it means to be Christ’s body. Like any body that can compensate if one part is missing or not doing its share, the church body can compensate when people don’t engage. But it remains only that – compensation, which falls short of full effectiveness.

Many churches have not clearly identified to what or to whom God has called their particular gathering of his people. Some churches have tried to cast such a vision by leaving much of the visioning and planning to a few leaders, who are then tasked to get the many volunteers to actually do it. But this process only serves to create and deepen a divide between leaders and the rest of the church.

People are more likely to volunteer, pursue a vision, and invest in a plan they were involved in developing – one that specifically targets their unique offerings. In light of this fact, the church can confidently engage in a natural process of identifying God’s vision and formulating strategic plans by identifying who is among them, bearing what gifts. Leaders and non-leaders sit down with one another, on the same side of the table, to hear from God why he has brought this particular group of people together and what he wants them all to do.

This approach also encourages churches to take a good look at the community in which they have been placed as God’s ambassadors – to recognize that this community is to receive the overflow of Christ’s vision and gifts of his Spirit so they, too, might see and worship God.

Thus, church leaders cast a vision that has first been created by listening with the people God, and then listening to the people to whom God wants to extend his care. When we match the spiritual gifts of everyone in the church with community needs, the result is vision with passion, and action to see it fulfilled.

One of the hurdles to engagement is that there is too much to do – and it often has very little to do with what God has in mind for a particular congregation. In other words, many churches are just plain too busy! Fewer choices designed with specific outcomes leads to excellence, which in turn leads to effectiveness, which in turn attracts involvement.
Analyzing and reducing what people in the church are doing may prove to be a difficult exercise, but a necessary one. There isn’t a single role in the church that should be done if it doesn’t match God’s mission for that church and if it doesn’t integrate well with the other roles. When we truly know who we are, how God has designed us, and what his Spirit in us is longing to do through us, we find that our “options” actually become pretty limited, yet leave room for all to be engaged.

Deeply tied to the vast array of opportunities “in” the church is a subtle message that volunteering “outside” the church isn’t quite as important. In other words, if it’s not for the church, that’s okay, but we still need you to be involved at the church. 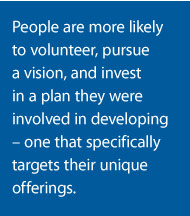 What would happen if everything but the essentials were cut from the church so that most of the engagement of God’s people actually happened somewhere else?

What would happen if we actually began commissioning people, releasing them from “in-house” ministry, to coach community sports teams, to teach music lessons, to visit people at the hospital, to volunteer at schools, to wash feet at the homeless shelter, to hand out Bibles instead of bulletins, and to have street BBQs instead of the big church BBQ?

What would happen if people began reporting during our faith gatherings and worship times about some of the fruit of that commissioning?

Some would say it’s not efficient or practical. But serving isn’t about being efficient or practical; it’s about being effective. It’s not about building programs and churches; it’s about building relationships and lives. Do less in the church so that people have time to serve in focused ways beyond the church. Take down the fences and intentionally commission God’s people to serve in the places where they spend most of their time and watch the church spill over into the community in natural and amazing ways.

The key skill: Learn to ask

There are two parts to this key skill for finding volunteers. First, we need to read the rest of what Jesus said about workers for the harvest: Ask. Ask the Lord of the harvest to send out workers into his harvest field (Matthew 9:38). He is not about to let his harvest sit and go bad in the fields.

There’s one caution. When you ask, be prepared for an answer you might not have expected. Many years ago, as I contemplated a serious lack of volunteers for a Vacation Bible School ministry set to start the next day, I sensed God reminding me that he had promised to provide, and that he keeps his promises. If I was short on volunteers, maybe it was because I hadn’t handled his provision the way he intended. My plans for the VBS had to change.

As I received that new orientation and loosened my grip on my ministry plans, I discovered that not only does he provide, but he does so abundantly. He teaches me how to minister within his provision, resulting in far more effective ministry than I ever imagined possible. That lesson has stayed with me through the years.

The second part of this skill is to ask people – directly, personally, and clearly with a specific role and expectations in mind. A Statistics Canada report on volunteering says that Canadians, especially young religious Canadians (15–24 years old), love to volunteer. But one significant reason the majority of people of all ages don’t volunteer is that nobody asked them.

Even more important than being asked is how the “ask” is done. For many, the “ask” is so general that they have little or no idea what they’re really being asked to do, or for how long, so they say no. Or, it’s an “ask” that fell far short of their level of commitment or capability.

All of the announcements, bulletin notes, emails, posters, sermons, and pleas combined are never as effective as personally asking an individual to take on a clear role that stretches their gifts and capabilities to new expressions. I’ve repeatedly seen the truth of this as I work with churches and ministry groups, helping them set the stage for growing their capacity for effective ministry.

It seems so simple, doesn’t it? The truth is, it is. We don’t really need more theological understanding or teaching about our calling or responsibilities. We don’t need to figure out what it will take to get people serving. What we need is to truly believe that God is intent on bringing in his harvest and that he is providing the workers to get it done. If we are short on volunteers, especially in an ongoing way, we need to evaluate whether we are stewarding his provisions well. If we aren’t, we must make the necessary adjustments. And then simply ask.

Shelley Campagnola is consulting and adjunct professor in church ministries at Heritage College and Seminary, Cambridge, Ont., and executive director of Ministry Resource, Inc. She is a member of Waterloo (Ont.) MB Church.
"God Calls All to Serve"Shelley Campagnolavolunteering
0 comment