What's New
A FOCUS on Mission
Must Patience Be So Slow?
Harold Jantz: A Heart for the Mennonite Story
Lorlie Barkman: A Life of Creative Engagement
Last Days, First Days
Women in Ministry: Bertha Dyck
January Moment in Prayer “Holy Spirit—Fill Us!”
The Church as the Patient Body of Christ
Advent: Making Much of Jesus: Christmas Day
Advent: Making Much of Jesus: Fourth Advent
Home News The Armed Forces enthrall children – and adults 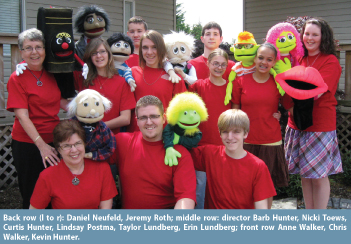 Puppets aren’t “just for children,” Barb Hunter says; “adults can’t seem to get enough of them.” She has led The Armed Forces, a puppet ministry at Mountain Park Community Church, Abbotsford, B.C., since coming there as children’s pastor in 1994, continuing to the present, long after her retirement in 1999.

Currently, the two teams – a junior team with members starting in Grade 5 or 6, and a senior team from Grade 7 and up – have amalgamated because many long-time members have left to attend college or have moved out of town.

The number of performances varies from year to year, but the team does at least one major musical annually with six to eight showings, and a number of smaller performances. The venues range from Mountain Park to other churches in the community to seniors homes. This spring, they performed “Planned with a Purpose,” a mini-musical done mostly with black light, including a 6½-foot puppet worked by two people.

The Armed Forces also performed at a women’s prison at Christmas. One inmate said the performance had been the most meaningful Christmas she’d had in her four years inside.

“I think adults are more enthralled than kids are,” says MPCC member Doreen Bauman, who has seen audience response in Canada and Ukraine. Puppets are not just a visual tool, “they have the ability of ‘coming alive’ in your hands,” Hunter explains. “With a puppet skit, you can introduce a problem, illustrate its cause and effect, and present its solution without [the audience] feeling preached at.”

Hunter gives “on-the-job” training to team members and, when possible, takes them to a puppet festival in the U.S. for workshop training and performance judging. But the training Hunter offers is more than just puppetry skills. The weekly practices start with sharing about members’ lives – their pains and joys – and praying together, for each other, and for the people in the audience. The team also discusses the messages of the songs and skits they will portray.

“It’s not a Bible study, but it is a time of bonding,” says Hunter. She encourages and mentors team members as they grow in puppetry skills and in relationship with God.

Chris Walker has been on the team since 1996, when he was in Grade 6. It was “a blast,” he says, but as he grew older, “I realized how effective a tool puppetry can be at sharing God’s love to a variety of age groups. I grew in being able to trust in both my team and God to effectively speak the message.”

Walker has attended the One Way Street puppet festival in the U.S. for many years and loves the opportunity to see new material, learn more techniques, and be critiqued by judges. For a third time, he took first place in the lip synch challenge. The Armed Forces earned seven awards in February: gold, silver, two People’s Choice, Outstanding Props, Outstanding Techniques, and Walker’s lip-synch award.

In the last few years, the team has begun using a new form of interpretive movement with dowel-rods. After an Easter performance of Newsong’s “Arise My Love,” MPCC youth pastor Shawn Driedger told Walker the powerful portrayal brought him to tears as he thought about “how much those kids had grown spiritually.”

Hunter has also shared her gift of puppetry abroad, where the smiling face of a handmade puppet convinced a stony customs agent to allow her boxes of supplies into the country. She was invited by Doreen Bauman to teach puppetry at the summer English Language Institute of the Evangelical Free Church mission in Dnepropetrovsk, Ukraine.

Hunter taught a group of 8–10 women everything from creating their own puppets to manipulation, eye contact, lip synchronization, height, and positioning. “The women were thrilled to create something so professional looking and became very attached to their puppets,” says Bauman. The team there is still together, performing in their church and neighbouring villages.

“Puppets are an amazing way to minister the truth of God’s Word,” says Bauman.

The lip-synch challenge, which tests skills other than just lip-synching, has been a part of the festivals for approximately 5 years now. It goes as follows: 16 people are brought on stage, 4 at a time. A song not familiar to the performers will begin to play. They must lip-synch as best they can to the words, and do appropriate actions with the puppet. Each group of 4 gets a different song. After all 4 groups have gone, the judges eliminate a few people with each new round. The songs get progressively more difficult, until the judges pick a top 3. This year’s challenge was the 3rd and most recent time I received first place.