What's New
A FOCUS on Mission
Must Patience Be So Slow?
Harold Jantz: A Heart for the Mennonite Story
Lorlie Barkman: A Life of Creative Engagement
Last Days, First Days
Women in Ministry: Bertha Dyck
January Moment in Prayer “Holy Spirit—Fill Us!”
The Church as the Patient Body of Christ
Advent: Making Much of Jesus: Christmas Day
Advent: Making Much of Jesus: Fourth Advent
Home News Sharing the pain of loss 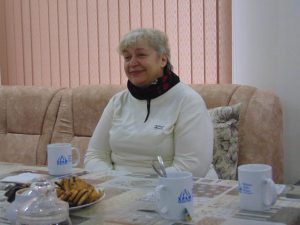 Claudia Antonovna Ushakova’s son died in combat in 2014 in the conflict in Ukraine. Through Hram, an MCC partner, and a peace club it operates, Ushakova has found understanding, a renewed sense of meaning, and an ability to consider dialogue and forgiveness. MCC photo/Olga Babakova

Imagine the pain of losing a child to war, compounded by not having a safe space to express grief.

This is Claudia Antonovna Ushakova’s story. Her son, a soldier in the Ukrainian army, died in combat at the beginning of the war in 2014.

The conflict began in early 2014, when Russia annexed Crimea in southern Ukraine. Unrest spread, intensifying from May through November 2014 as waves of people fled fighting in the Donetsk and Lugansk oblasts (provinces), which share a border with Russia.

Ushakova hails from Zaporizhzhia, which is 200 kilometres from the conflict zone and where there are no military operations. Because it’s a peaceful city, some people are in denial about the problems of the war and people like Ushakova find others don’t understand their pain or even reject it.

“My soul was in pain. I had no one to share my experiences with,” she explains. 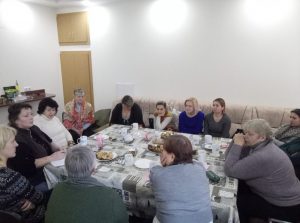 . In Ukraine, an ongoing armed conflict since 2014 has left society very divided, even in areas where fighting is not currently active. MCC partner “Hram” in Zaporizhzhia, Ukraine, works with veterans and with the families of soldiers who have died, helping them to constructively deal with traumatic experiences and to re-integrate into this polarized society. MCC photo/Lyubov Varvyanskaya

MCC’s partner, Hram was founded in 2008 and began responding to the needs of those affected by the conflict when it began in 2014. Ushakova found a safe place to share her experiences in a Hram-run peace club.

“Regularly attending the peace club meetings for family members of fallen soldiers helped me to understand that in this world I am not the only one with this problem and there are people with whom I can talk about my misfortune. They understand me, share my pain, and support me in difficult moments,” she says.

She adds: “This is where I found a safe place where I could open up and talk about what is really important to me.”

According to Irina Sergeevna Dmitriv, the director of Hram, the peace club not only provides some respite for people who have lost loved ones, it also works with veterans and offers tips for conflict resolution.

“With the military background and heightened domestic aggression, it is important to talk to people about the possibility for peaceful dialogue and give them new models of conflict behaviour,” she says. “It’s also important to help the victims, and prevent the spread of destructive behaviour among them.” 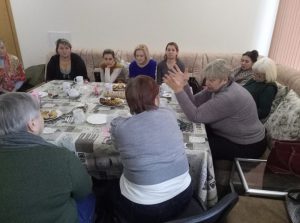 : Individuals who have lost family members in the conflict in Ukraine gather for peace club at Hram, an MCC partner.

According to Dmitriv, veterans without adequate coping mechanisms for their trauma can turn to alcohol or become violent. Suicidal tendencies are also common among veterans. For Ushakova, the peace club helped her personally, but also motivated her to help others.

“At these trainings, I discovered new qualities in myself and learned to forgive and understand other people, to dialogue with others, although earlier for me it seemed impossible,” she explains. “I have found the strength to help other people in similar situations, and I take part in the peace club, as a volunteer.”

It is good to see and read these positive articles about the work of MCC, and to read them in an MB periodical. I have been associated for years with MCC, and been an MB rep. to MCC structures. It was an embarasment to me at times to hear the question “Why is MB leadership so ambivalent to the work of MCC?”. I have heard attempts to explain the why but found them shallow and frankly hypocritical. So, to read these articles is uplifting and gives me some cause to think that there my be hope afterall.
Ernie Schmidt