What's New
Through the conflict, life carries on in Ukraine
A FOCUS on Mission
Must Patience Be So Slow?
Harold Jantz: A Heart for the Mennonite Story
Lorlie Barkman: A Life of Creative Engagement
Last Days, First Days
Women in Ministry: Bertha Dyck
January Moment in Prayer “Holy Spirit—Fill Us!”
The Church as the Patient Body of Christ
Advent: Making Much of Jesus: Christmas Day
Home Arts & Culture Service unites across theological divides 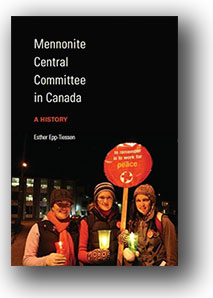 Working with local farmers, George, an engineer, invented the rower pump using mostly locally available material. By 1986, more than 40,000 pumps were in use in 20 countries, enhancing irrigation and food production. For his invention, now exhibited in Ottawa’s Museum of Science and Technology, George (presently of Carman, Man.) received a financial award from a British organization. He promptly donated the funds to MCC.

Klassen’s story is but one of many in this comprehensive and much-needed history of MCC Canada, now 50 years old. Using a limited number of photos, this book is enhanced by many brief illustrations like the one about the Klassens.

Prior to the 1960s, MCC work was done primarily through the Akron office; however the U.S.-focused agenda did not always match the priorities of Canadians. Canadian Frank Epp promoted the amalgamation of 11 Canadian relief agencies into one organization: MCC Canada, established in 1963 with MB J.M. Klassen as the first executive director, was the result.

MCC Canada brought together 11 different Mennonite groups: a major accomplishment with such a diverse family. Though MCC Canada’s constituent churches rarely worshipped together, MCC’s success is an example of the triumph of lay leadership and the ability to overcome theological differences and serve those in need. Denominational prejudice was challenged, life-long friendships established and spouses found each other.

An important understanding with the various denominations was that MCC’s role was to meet physical and social needs; mission boards would do evangelism and church planting.

From “a cup of water” to “teach to fish”

Historically, relief and refugee assistance were the focus; now MCC is a multimillion-dollar enterprise serving many needs: raising money and reducing waste through thrift stores and relief sales; responding to natural disasters through previously developed networks of local partners; promoting volunteerism and international understanding through young person assignments like PAX, TAP and SALT; labouring at reconciliation with victims of crime, through prison visitation and restorative justice work; spawning organizations like Mennonite Disaster  Service, Canadian Foodgrains Bank, More With Less recipes, Ten Thousand Villages; and aiding those in poverty in Canada and abroad through social housing and a plethora of development initiatives.

Akron’s concerns about the relationship to the new MCC Canada were alleviated when donations from Canada to Akron increased. However, MCC Canada also retained control of some funds, such as those granted by CIDA, with no restrictions about their use. This meant Canada was able to send aid to Vietnam when Akron could not, and was able to budget funds to assist U.S. draft evaders.

This reflects an ongoing dilemma in MCC: responding to the wishes of the supporting constituency (many of whom see MCC as primarily a relief agency) while pushing the prophetic edges. Peace, for many returning workers, included issues of justice, well-being, reconciliation and dismantling racism.

This predicament is captured in a Palestinian’s comments: “We get Christmas bundles [from North Americans] and the Israelis get Phantom jets.”

The emergency-relief versus dismantling-unjust-systems dilemma also arose with the Southeast Asian refugee crisis in the late 1970s. In the end, MCC negotiated a groundbreaking sponsorship agreement with Ottawa resulting in half of all constituent churches sponsoring refugees within a year. However, some MCC field staff had wanted to minimize resettlement and focus on root causes.

MCC service also pushed at prophetic edges by opening doors for women to assume leadership positions not necessarily available in their home communities. Despite no representation on the early MCC boards, women have always contributed significantly to MCC. For example, in 1986, more than 800 women in Yarrow, B.C., prepared material aid and Christmas bundles.

MCC opened its Ottawa office in 1975 despite questions about government involvement. Its value soon became obvious when Bill Janzen, based on his relationship with senior bureaucrats and politicians, was able to arrange Canadian citizenship for many Mennonites from Mexico. One MP said they listened closely when Janzen spoke; his material was well researched and often backed up by credible reports from MCC workers in the field.

Holding together an increasingly diverse constituency is a constant challenge: some want to focus on relief work, others see peace and justice as primary issues, others see a narrow proclamation of gospel as essential. These matters warrant further study.

This excellent history of MCC Canada leaves some unanswered questions. How has MCC managed these impressive accomplishments? Is it the service-driven faith of Mennonites? Is it that many MCCers serve only a three-year term? Is it the strong grassroots connections at a provincial level?

Organizations like MCC that grow rapidly are inclined to follow a business model and can become rigid bureaucracies with too much power (and little or no accountability) left in the hands of a few administrators. Administrators can limit board member involvement or hide behind “confidentiality” when discussing issues. Christian agencies like MCC should be able to address these matters differently rather than using corporate methods and being obsessed with the “correct” public image.

Wealth, power and prestige bring temptations, wrote MB businessman Art Defehr in a 1982 Direction Journal article. “The paramount issue…is the same one which saddened the rich young ruler.” MCC is not immune from those temptations.

MCC Canada is a ministry of the church. It has a remarkable history of successful service in the name of Christ as exemplified by George and Sherri Klassen. The voluntary service program – for many years, the most widely known and actively participated in MCC initiative – was a life-changing experience that promoted a culture of caring and a witness against post-WWII materialism in North American churches. Though a smaller part of their work today, volunteer exchange programs like IVEP and SALT continue to make connections across the globe.

MCC is loved by many and is close to the heart of what it is to be Mennonite. Its genius lies in the way it has involved people from the grassroots in service, whether tying quilts in rural Saskatchewan, building relationships with senior government officials in Ottawa or bringing the professional skills of educators, engineers and peacebuilders to areas of need in the far corners of the globe.

As a people’s movement, MCC embodies faith, caring and compassion that lessens suffering, builds friendships, heals wounds and practises peace – all in the name of Christ.

—Henry Neufeld attends Point Grey Inter-Mennonite Fellowship, Vancouver; he and Tena worked in Thailand with MCC in the 1980s.

The Divine Home Invasion: What the Christmas Story...