What's New
Through the conflict, life carries on in Ukraine
A FOCUS on Mission
Must Patience Be So Slow?
Harold Jantz: A Heart for the Mennonite Story
Lorlie Barkman: A Life of Creative Engagement
Last Days, First Days
Women in Ministry: Bertha Dyck
January Moment in Prayer “Holy Spirit—Fill Us!”
The Church as the Patient Body of Christ
Advent: Making Much of Jesus: Christmas Day
Home News Half-century organization is “a movement” 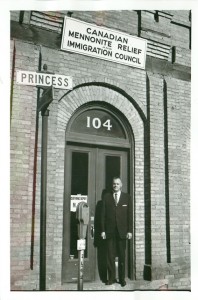 1963 was an extraordinary year, said Esther Epp-Tiessen, author of a soon-to-be-published history of MCC in Canada.  Mennonite Central Committee Canada celebrated the organization’s 50th year of existence with a dessert reception at Canadian Mennonite University, Sept. 20., where Epp-Tiessen observed that in 1963, Bob Dylan wrote “The times they are a-changin’” and indeed they were: Martin Luther King Jr. gave his  “I have a dream” speech at the march on Washington, the FLQ began its activities in Quebec – and MCC Canada was born.

Mennonite church leaders gathered at Portage Avenue MB Church, Winnipeg, in December 1963 to “rethink how Mennonites work together,” said Epp-Tiessen, also public engagement coordinator for MCC Canada’s Ottawa Office. Until then, Canadian Mennonites had worked with MCC, based in Akron, through an “alphabet soup” of smaller, denomination-based organizations. The men at the Portage Avenue meeting proposed to dismantle these organizations, create a new organization with “a sweeping mandate” for work in Canada. In a last-minute move, they landed on the name MCC Canada.

For all its boards, constituencies, and provincial bodies, MCC Canada has not been about bureaucracy but about activities and participants. “The people have made [MCC] not so much an organization, but have made it a movement,” said Epp-Tiessen.

Four people, whose work with MCC represents a variety of roles, illustrated this aspect by sharing stories from their experiences:

No Mennonite gathering is complete without singing; this evening included both congregational singing, and special music by Darryl Neustaedter Barg and Kim Thiessen.

With the dismantling of MCC binational in 2012, MCC Canada moves into the future with a strong mandate for its work in relief and development both in Canada and internationally. Executive director Don Peters closed the program with thanksgiving: “We are thankful to have a sense of being part of a great cloud of witnesses,” he prayed.

Mennonite Central Committee in Canada—A History, a new book commissioned by the Mennonite Historical Society of Canada, will be launched at a history conference at the University of Winnipeg, Dec. 13 and 14.

Thanks very much for this nice article. Just a little correction. When MCC Canada was founded, it did not have a mandate for international work, only for broad and sweeping work in Canada. All its international work was to be done through the MCC based in Akron, PA. This was one of the compromises reached in the creation of MCC Canada.

Thank you, Esther. The piece has been revised to reflect your correction.