MCC sends food and relief to Cubans in crisis 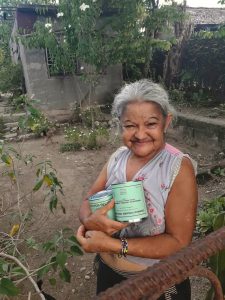 The situation in Cuba was incredibly dire when a shipment of MCC relief kits and canned food arrived.

“People have told me they haven’t had an egg or any kind of meat for six months,” says Bonnie Klassen, MCC area director for South America and Mexico. “They’re out of toothpaste, so they’re brushing their teeth with soap. And not even commercial soap, mind you, but soap they’ve made themselves.”

So when the Brethren in Christ Church of Cuba (BICCC) distributed some 20,000 kg of MCC relief kits, hygiene kits and canned chicken, it was cause for celebration and thanksgiving.

“We are grateful because today we see the answer to our prayers, what we have been praying for over a long time,” says José Gonzalez, pastor of the BICCC church in Santa Clara. “We see that what we thought was impossible is possible. We see that we are in the hands of God. Thank you for this help.”

Cuba’s desperate position is the result of a combination of factors. The island continues to feel the effects of the U.S. embargo, which has banned most trade between the U.S. and Cuba for 60 years. In 2020, new restrictions made it harder for Cubans abroad to send money back home. And the last two years have seen pandemic travel restrictions deprive Cubans of one of their most important sources of income — tourism.

Without a steady stream of beachgoers coming in and out of the country, Cuba’s already hampered economy is barely hanging on. The country hasn’t seen scarcity like this since the collapse of the Soviet Union in the 1990s.

“When I asked what would be most useful to send, the answer I’d always get was send anything and it will be useful because almost everything is lacking,” says Klassen.

MCC doesn’t have a formal presence in Cuba but has sent relief there in the past. Over the last few years, MCC has sent relief funds that partners like BICCC could use to buy and distribute food and supplies locally. However, Cuba’s reality now is that all the money in the world can’t buy food from empty store shelves.

Shipping anything to Cuba from North America is complicated to say the least. It’s entirely legal to ship humanitarian relief there, but difficult to find companies willing to do it because of the perceived risk of operating under the U.S.’s far-reaching embargo. But through the hard work of MCC’s material resource coordinators, more than 17,000 cans of canned chicken, 800 hygiene kits (with toothpaste) and 840 relief kits arrived in Cuba in September 2021.

Even knowing the grim state things are in, the response from the Cubans who received these items was almost overwhelming, says Klassen.

“In the first couple of days, one of the people in the church sent me a WhatsApp voice message and he was literally in tears because of the feminine hygiene products. Women had not seen feminine hygiene products for a very long time. And that was just very meaningful. I mention that because it’s just, I think, highly unusual for men to start crying about that. And later they just went on and on about all the things that they’re making with canned chicken.”

Join MCC in advocating for the U.S. government to lift the Cuban embargo. And to support relief in Cuba and dozens of other countries, visit donate.mcccanada.ca/relief.

Jason Dueck is a communications generalist from Winnipeg, Man.