What's New
Through the conflict, life carries on in Ukraine
A FOCUS on Mission
Must Patience Be So Slow?
Harold Jantz: A Heart for the Mennonite Story
Lorlie Barkman: A Life of Creative Engagement
Last Days, First Days
Women in Ministry: Bertha Dyck
January Moment in Prayer “Holy Spirit—Fill Us!”
The Church as the Patient Body of Christ
Advent: Making Much of Jesus: Christmas Day
Home News Supporting hope in Cuba 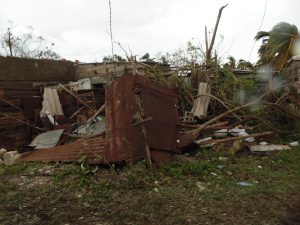 Caibareín is a small coastal town in the province of Villa Clara that was hard hit by Hurricane Irma.  MCC is supporting the Brethren in Christ Church of Cuba in its disaster response, which will include housing repair and emergency food in this town.

“It was a deep, threatening growl. I had knots in my stomach,” she says. “That wind was purely destructive.”

Klassen, MCC’s Area Director for South America and Mexico, arrived in Cuba just hours before Hurricane Irma hit. After waiting out the storm for a full day, she headed to the north coast where the damage was most severe. Klassen travelled – by vehicle, motorcycle and sometimes on foot in rubber boots –and listened as people described a storm that packed winds of more than 250 kilometres an hour, and seemed to hover for hours.

“A lot of them talked about the sheet metal on their roof, lifting up and then banging down. Over and over for hours. Until it just blew away,” Klassen says.

Klassen says most of the cement houses still had walls, but no roofs. Those made of wood were tilted, or gone altogether – the remains mixed with household items like dishes.

Corn, plantain and bananas are common foods in Cuba, and Klassen says they were flattened by the storm. Fortunately, beans, another common crop, had not yet been planted.

Klassen drove past orange and lemon groves where the ground was littered with fruit, most of which cannot be salvaged. And she says farmers are lamenting the loss of trees that are decades old. 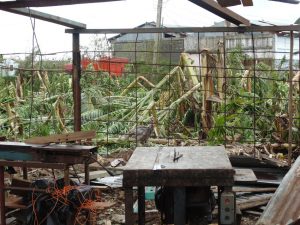 “We visited one farmer who had 55 kinds of trees and plants. When the hurricane came he boarded up his windows because he couldn’t stand watching his trees die,” Klassen says. “They were like his children.”

But Klassen says like many of the people she spoke with, the farmer is determined to rebuild. When the wind died down, the clean up began.

“He cut all the big trees down, he had a plan to process the fruit into jam,” she says. “It seemed to empower him as he faced something so devastating and unpredictable.”

MCC is working with the local organization, Christian Centre for Reflection and Dialogue in Matanzas province to provide emergency food and shelter, along with support for small scale farmers.

MCC is also working with Brethren in Christ (BIC) in Cuba to assist congregations in Las Tunas and Villa Clara provinces. These projects will focus on the repair of houses and supply of emergency food. Klassen says after Hurricane Matthew in 2016, BIC churches set up emergency brigades that could respond quickly after a disaster. Those brigades are a major advantage now.

“There’s a huge potential in working with churches,” she says. “Churches are everyday people with diverse skills. They know how to respond, and how to get access to things like locally produced food.” 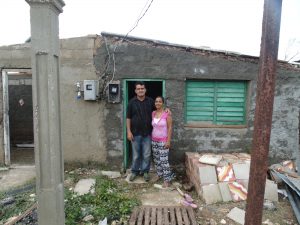 BIC pastors Yoel Balbusano and his wife Daily live in a small room behind the church, shown in the picture. They have received three neighbour women into their tiny home. These women – one in her 80s and one with special needs – lost the roof off each of their houses.

Klassen says as MCC contemplates what’s ahead for Cuba, she focuses on another farmer she met there.  He grew roses – it was his major source of income. All of them were flattened by Irma. He described straightening each flower, one by one.

“He did this carefully and gently, because roses are gentle things,” Klassen says. “I am always looking for those signs of resilience. MCC’s job is to support that hope.”

To contribute to MCC’s disaster response in Cuba and Haiti, you can donate online, at mcccanada.ca/hurricane-irma. Contributions can also be made by phone, 1-888-622-6337 or at your local MCC office. Please contact Mennonite Disaster Service to support its response to Hurricane Irma in the U.S.

[Julie Bell is a staff writer for MCC in Canada.