What's New
Leading through the trauma of covid: Part two...
Ask God which town
Where to from here?
CCMBC National Director attends 2022 ICOMB Summit
MCC Canada and MCC Manitoba sell shared property...
The world appears to be growing darker
Sharing a new and unified language
6 reasons to attend the MWC Global Assembly...
One too many
Just one more
Home News Clean hands and full hearts: Handwashing sparks joy while preventing COVID-19 at a Malawi food distribution 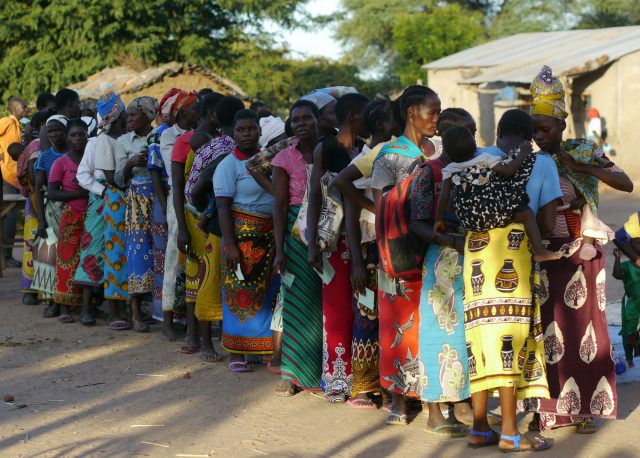 In late 2019, before social distancing was necessary, women from Tomali Village in the Chikwawa district in Malawi line up for a distribution of food and relief items. As part of MCC’s Cyclone Idai flood relief project in Malawi, MCC partnered with Brethren in Christ Church Malawi to provide emergency food relief to 400 families in one of the poorest areas of Malawi. MCC photo/Amanda Talstra

BIYASONI, Malawi — There were no known cases of COVID-19 in Malawi when Vivian Bertrand was planning how to include soap and handwashing in the next food distribution. But it didn’t take long for that to change.

Bertrand had been working with Brethren in Christ Church Malawi (BICCM) for 11 months. With support from MCC, they’d been distributing food to families whose livelihoods were destroyed by Cyclone Idai. One of the most powerful storms on record, Idai devastated much of southeastern Africa in spring 2019. Many families in Biyasoni had their homes and crops completely washed away.

As Bertrand was preparing for the last of a series of food distributions funded through MCC’s account at Canadian Foodgrains Bank, COVID-19 had begun to spread around the world. Even though it was in the early stages of global spread, prevention of the disease had already become a primary focus. Bertrand and her team knew they had to take serious care to keep people safe. No one knew that a man in the region had already unknowingly contracted the novel coronavirus.

“We bought enough bars of soap so that each household would get four,” says Bertrand, a consultant with MCC in Malawi. “In these communities, families cannot afford hand soap. Most lost everything, including their homes and crops, a year ago when the cyclone hit.”

But preventing the spread of disease doesn’t end with soap and food alone. Bertrand’s team taught people what the symptoms can look like and how to keep a safe distance away from anyone they don’t live with whenever possible.

Along with soap to distribute alongside the food, Bertrand and the BICCM team arrived in the town of Biyasoni with all the handwashing necessities. Buckets of clean water, liquid soap and wash basins were set up at safe distances. But Bertrand wasn’t expecting the response she saw.

“We squirted soap on peoples’ hands, showed them how to do a thorough wash, and then used a mug to pour water over their hands to rinse them,” she says. “There was so much joy. Many of the women laughed while washing.