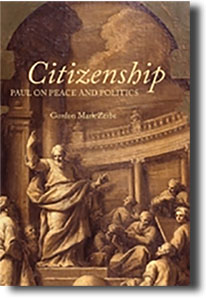 Citizenship: Paul on Peace and Politics

Gordon Mark Zerbe’s Citizenship is a must-read for anyone who preaches from Paul’s letters.

One of the greatest strengths of this volume is the care Zerbe takes in recovering Paul’s message through studying the vocabulary in his letters. Rightly discontent with the way English translations limit Paul’s message, Zerbe helps his reader understand the many nuances behind particular words Paul wrote.

Especially helpful is his challenge of what we often hear when we read “believer” in our English Bibles. A better term, according to Zerbe, would be “Jesus-loyalist” as a short hand for “those who are convinced, submit in trust, and declare loyalty” to Jesus. Such an understanding can transform the way we view our citizenship, our polity within our own community and the nations we find ourselves in, and the way in which we deal with injustice.

This concept of being Jesus-loyalists draws out further implications to the politics of worship, the unity and diversity within the Messiah’s body, Paul’s economic theory, and security. As Zerbes addresses each of these implications, he embraces, rather than avoids, the tensions within Paul’s writings.

Zerbe wisely retains the tension of an alternative community in formation now and the anticipation of that community that will be present in the age to come. This shapes how we worship, how we regard our differences, and how we deal with internal and external conflict. Worship then retains its place as a sacred, Spirit-filled ritual while embodying a posture of allegiance personally and communally. This also shapes how we seek justice through a “pacifism that is not withdrawn or passive, but thoroughly engaged in struggle.”

The section that deals most specifically with the issue of violence and nonviolence in Paul’s letters is cleverly entitled “security.” Zerbe helpfully recognizes that Paul’s teachings embody an ethic of non-retaliation and peace based on Paul’s vision for cosmic peace. In this view, the Jesus-loyalist’s security is found in trusting in God’s future just judgment, thus Paul can exhort his readers to expressions of love and peace in their troubled context.

The one downside to this volume is that the language and exposition are not easily accessible for the average reader. Zerbe’s theological terms and academic language may become frustrating; however, it’s worth pushing through. This book would make a great gift for a pastor or seminarian

To date, this is one of the best books I’ve read on Paul’s letters since John E. Toews’ Believers Church Bible Commentary on Romans. Citizenship is an excellent example of biblical theology and its Anabaptist-Mennonite perspective could be extremely helpful for the church. I can already anticipate using what I have learned from Zerbe in my own ministry.

It’s clear Zerbe has a high regard for the authority of Scripture and the power of the Spirit to reshape and re-orient us toward the will and kingdom of God. It’s also clear that Zerbe wishes to place the writings of Paul in context, understanding Paul as a follower of Jesus rather than an interpreter of Jesus. Zerbe’s definition and exploration of the Jesus-loyalist – a title that also describes Paul – is a most excellent gift to the church in all its forms. In the 21st century, may we too live as Jesus-loyalists above all else.

I look forward to applying this idea of being a Jesus-loyalist to the way I speak about my own citizenship in the kingdoms of this world as well as God’s kingdom. I also look forward to allowing the Spirit to challenge me to live out that loyalty in new, creative, and life-giving ways.

—Clayton Gladish is a graduate of Fresno Pacific Biblical Seminary with an MA in New Testament.

How do kingdom citizens act in a world...