What's New
Through the conflict, life carries on in Ukraine
A FOCUS on Mission
Must Patience Be So Slow?
Harold Jantz: A Heart for the Mennonite Story
Lorlie Barkman: A Life of Creative Engagement
Last Days, First Days
Women in Ministry: Bertha Dyck
January Moment in Prayer “Holy Spirit—Fill Us!”
The Church as the Patient Body of Christ
Advent: Making Much of Jesus: Christmas Day
Home Arts & Culture Citizens of a world transformed 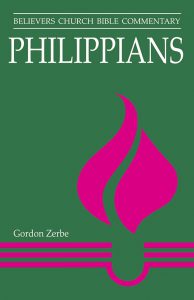 Gordon Zerbe’s commentary on the book of Philippians takes on not only the task of theologically breaking down a letter for readers living thousands of years after it was written, but also the task of grounding the letter in its historical and cultural contexts.

This is an important undertaking for any biblical work, but one especially helpful for those of Paul’s writings which are numerous and influential. It was particularly interesting the way Zerbe weaved Paul’s theology from the other letters he’s written with the things Paul was saying here to the small church at Philippi.

Gordon Zerbe is professor of New Testament at Canadian Mennonite University (CMU), and has broad global experience, having been a visiting professor at the Silliman University Divinity School in the Philippines for a number of years. I had the privilege of taking courses with Dr. Zerbe at CMU, which is a large reason I was drawn to this book.

The key insights of this commentary align directly with the MB Confession of Faith’s statement regarding Society and State (Article 12), where we confess our primary allegiance is to Christ’s kingdom over and against that of the state or society. Throughout the book, Zerbe highlights the fact that Paul is teaching and encouraging an alternate political body under the reign of Messiah as opposed to the “secular empire” – Paul’s constant use of citizenship language emphasizes a counter-politic to that of Rome.

Tied to this is a secondary key insight that discusses behaviour. The citizens of Messiah’s kingdom will act out of loyalty and in obedience to Messiah. Zerbe argues that, for Paul, salvation is participation in God and working in alignment with God’s purposes. That participation, that obedience, is to be enacted and embodied in this very world. Salvation does not hold a vision of some distant, ethereal “heaven,” but a vision of all of creation transformed and renewed, not replaced or discarded.

Anyone who desires a better understanding of Paul’s theology and arguments should read this commentary. Anyone who desires insight into the context of Paul and the early church’s historical and cultural situation will benefit from reading this book. Context is important, and Zerbe does an excellent job of grounding Paul in his context.

God does not will suffering, but God is still sovereign and can use suffering.

Paul does not talk about the departure of souls from bodies but rather the “transformation” of bodies. For Paul, what changes between this age and the next is not the fact of having a body. Rather, what changes is the nature of its animation.

It is time to recover the notion of Christian practice and identity specifically as “citizenship,” both in its corporate dimensions…and in its theopolitical aspects.

Whether consciously or unconsciously, Jerome avoided any rendering that might put political (earthly) and spiritual (heavenly) loyalties into any conflict…. Thereby an interpretive and translation tradition emerged in Latin and then English that both individualised Paul’s exhortation and robbed it of its original theopolitical implications.

is a member of Crossroads MB Church.