What's New
How sweet the sound
One MCC Thrift Store Began With a Few...
A Hunger for Conversation
Getting the mental and emotional rest you need...
The Patience of God
2023 Spirit of MDS Fund accepting grant applications
October 2022 update from the CCMBC Executive Board
Arnold Community Church hosts block party to thank...
When Spring returns
An autumn reset
Home Arts & Culture Reconciliation play connects with audience 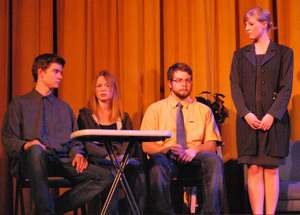 cted to the people who hurt us even if we do not realize it. This is one of the messages of Re:connections, a joint project between Mennonite Central Committee and Bethany Bible College, Hepburn, Sask.

Wilma Derksen wrote Re:connections based on real-life workshops with both offender and victim groups. The result is an authentic depiction of what offenders and victims go through when a violent crime is committed.

The play begins with Greg describing the downward spiral of his life. The absolute bottom comes when Greg murders an innocent man named Jack. Greg is haunted by what he has done to Jack’s family and grapples with the hopelessness that engulfs him.

Next we see Jack’s widow, Marilyn, as she is overcome by grief and anger. The memory of what Greg did is constantly on her mind. She eventually realizes that she has the power to choose her attitude no matter how dark the circumstances and reluctantly agrees to meet Greg in an effort to deal with her loss.

Re:connections was written for a secular audience, but the biblical message of reconciliation is unmistakable. Greg and Marilyn meet and gain new insight and peace as a result. The process of healing moves forward as they release each other and start a different life.

This play was wonderful and was well-received by the audience. The production showed great depth in its script and acting.

Although the subject of the play was serious, Derksen injected appropriate pieces of humour, which were welcomed. The Bethany Players did a fantastic job using a small cast to portray a large number of characters without confusing the audience.

Watching this play was a great experience, and I hope Re:connections is produced again so a wider audience can appreciate it.

–Leanne Heinrichs is a member of Forest Grove Community Church along with her husband Galen. They have two children, Sam and Reagan.
Bethany CollegeLeanne HeinrichsRe:connectionsWilma Derksen
0 comment