What's New
A FOCUS on Mission
Must Patience Be So Slow?
Harold Jantz: A Heart for the Mennonite Story
Lorlie Barkman: A Life of Creative Engagement
Last Days, First Days
Women in Ministry: Bertha Dyck
January Moment in Prayer “Holy Spirit—Fill Us!”
The Church as the Patient Body of Christ
Advent: Making Much of Jesus: Christmas Day
Advent: Making Much of Jesus: Fourth Advent
Home Life & Faithfeature articles How to pray like Jesus 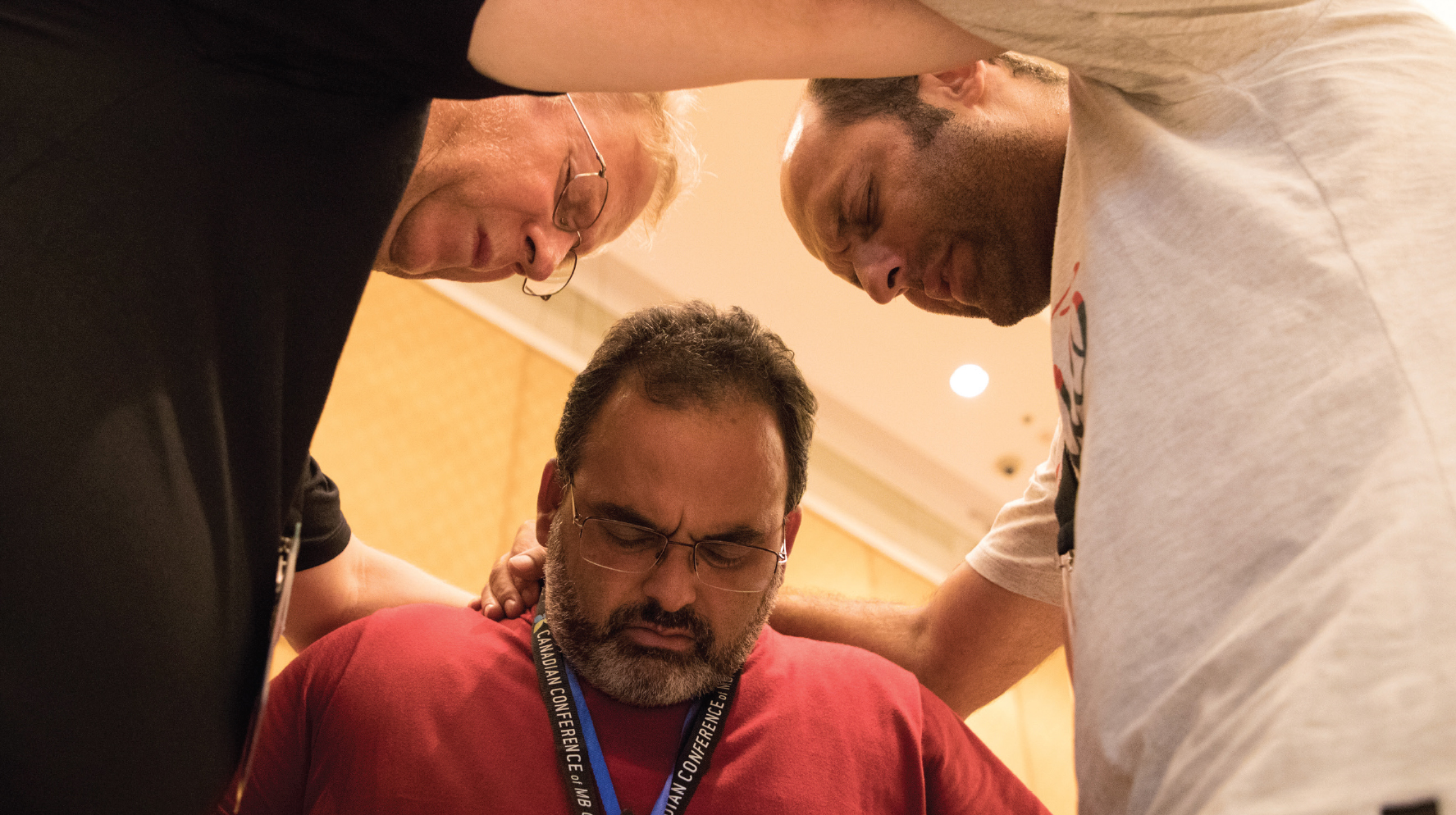 Brazilian MB leaders Paul Duck, Emerson Cardoso, and Reginaldo Valim (clockwise from left) pray together at the ICOMB summit on prayer and mission in Thailand, March 2017.

Stories and lessons from a Brazilian MB

Do you believe that God can do more in the next years than he has done in the past years? Three years ago, we asked this of our Mennonite Brethren church in Curitiba, Brazil. Only 10 percent of the congregation believed it could happen. So, the leaders called the church to pray and ask God for revival.

One year later, a group of Haitian immigrants have become a part of the church. Despite the considerable differences in culture and colour, God moved the traditionally German members of the church to welcome these new people. Through prayer, God transforms hearts when we are willing.

When we study the practice of prayer, we must go back to Jesus. Even though he is God, Jesus was a person of prayer. He prayed regularly; he prayed very often.

The busier Jesus became, the more he talked with God. Why? Because he knew God! Jesus knew God as Abba, his Daddy, his loving Father, whose main interest is to love, teach, and heal.

Jesus also shared his fears and his anguish with God. He experienced God not only as a source of compassion but also of strength. In the Garden, Jesus turned to God to find the strength he needed to complete his task (Mark 14:36).

Jesus’s actions are a model that we can imitate.

Jesus assumes we will pray.

My impression is that many of us don’t really pray, not only because we don’t sense the need, but because we believe God will accomplish his will whether we pray or not. And we don’t pray because we do not know how.

Often we distort the conversation with him, merely “saying prayers” without hearing what comes out of the heart of God. In Brazil, we say that we should remain in prayer long enough that our internal voices quiet down so we can hear his voice.

That is when praying truly begins.

The disciples saw Jesus praying often, so they asked him: Lord, teach us to pray. And he does.

Similarly, the apostle Paul commands us to pray, showing us that the Christian life depends on prayer.

So, prayer is something we work at doing until we do it well.

I worked for more than 30 years in a multinational company. When the boss called for a conversation, I never dared to say: I do not have time for you now. The consequence could be instant firing. More than we obey an employer, we should obey our Lord and Saviour, Jesus.

Jesus calls us to have regular conversations, a real relationship with him. How sad that we do not hear the call. Most likely we also should be fired, for Jesus is an authority more important than any employer.

We should not consider praying as a “must,” however. As W. Bingham Hunter suggests in The God Who Hears, God gives us the privilege of cooperating with him in the outworking of his will. Through God’s Spirit, he moves us to pray; in response to prayer, he accomplishes his will. Whoever enters into the presence of the Lord never returns the same.

For many year, the Brazilian MB conference had no growth. As leaders, we got down on our knees and asked God what the reason was. He spoke very clearly to us: if you will not repent from the sins that have been swept under the rug for so many years, there will be no growth. So for several weekends we met in a cabin for prayer and planning. At these meetings, we opened our hearts, confessed sin, and asked God to transform our lives. We decided to willingly obey and follow the orientation of the Holy Spirit.

Since then, a group of more than 25 churches who had left the conference returned and are becoming reintegrated into our church family.

Some leaders protested: we cannot take them back, they are too charismatic. To discern an answer, we went on our knees. God showed us that the Core (Jesus Christ) should be in the centre and the rest would be solved.

This difference in the key role emotion plays for those in the Southern Hemisphere compared to the role of the intellect in the Northern Hemisphere is a challenge for the Mennonite Brethren in Brazil, who have members oriented both ways. Emotional people cry and pray; rational folks think it through.

With my German background, I had to learn this from my Brazilian colleagues. One of our “comeback” churches in São Paulo rented a mountain for prayer, not only for their own church, but for all those who would want to pray. An average of 50,000 people go to the mountain to pray every month. Of course, our prayers depend on our hearts, not our location, yet this mountain experience is special not only for us, but very important for the expansion of God’s Kingdom.

I have learned to move from a mathematical prayer to a relational prayer that connects me a lot closer to the Lord.

Prayer does not give us spiritual power. Instead, prayer aligns our life with God so that God demonstrates his power through us.

My church in Brazil started 2017 with a 40-day prayer movement for revival. As the year wore on, people shared testimonies of transformation. Until then, several participants said, they had never heard God speaking personally to them.

Eight months later, God began a revival in our church through the teenagers. The participating group increased from 60 to 140. Before Christmas, we celebrated the baptism of 24 teenagers.

Now we needed leaders who would help disciple these young people. As we prayed to the Lord of the harvest, he showed us that we already had the workers, they just had to be trained.

We never imagined that God would be starting the revival through this young group.

Finally, we are learning that prayer is not dumping my stuff before Jesus and racing away. The purpose of prayer is not to convince God to change our circumstances, but to prepare us to be involved in God’s activity.

Christians who are growing in spiritual maturity change their prayer attitude. They communicate with the Lord, then intentionally move into a period of silence (solitude). They wait for the Lord to speak.

We have been challenging people to make a commitment for one year to take 15 minutes of silence before the Lord each day. My period of silence shall define my agenda for the day.

I believe God is speaking and transforming, able to do more this year than in the last. What will I learn as I follow Jesus in prayer in 2018?

Read more about the revival of the Brazilian MB church.