What's New
A FOCUS on Mission
Must Patience Be So Slow?
Harold Jantz: A Heart for the Mennonite Story
Lorlie Barkman: A Life of Creative Engagement
Last Days, First Days
Women in Ministry: Bertha Dyck
January Moment in Prayer “Holy Spirit—Fill Us!”
The Church as the Patient Body of Christ
Advent: Making Much of Jesus: Christmas Day
Advent: Making Much of Jesus: Fourth Advent
Home Arts & Culture A petition for partnership

A petition for partnership 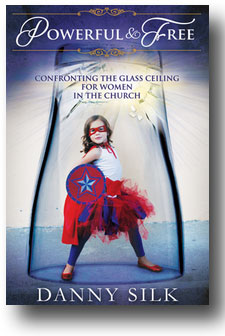 What comes to mind when you hear the phrase “women in ministry”?

In July 2006, the Canadian Conference of MB Churches adopted a resolution by the board of faith and life that “recommends that the Conference bless each member church in its own discernment of Scripture, conviction and practice to call and affirm gifted men and women to serve in ministry and pastoral leadership.” The resolution also contained a call to action encouraging “congregations to articulate the means and method of reaching that consensus for its members and adherents.”

Eight years later, some have taken up this discussion, but for many churches and individuals, the issue remains under-explored. The status quo of mostly male leadership prevails.

In his brief but pithy book, pastor Danny Silk of Bethel Church in Redding, Cal., raises the question from a different angle. “If we preach and teach equality for men and women,” he asks, “why don’t we see this widely demonstrated by making room for qualified women to lead at every level – especially the senior, or most visible levels?”

Drawing from his extensive teaching and leadership experiences in the global church, Silk suggests “there is a direct ideological and cultural connection between marriage hierarchy and the Church’s male-dominant leadership. Both realities work together to send a structural message about gender to the Body of Christ.”

And this message is not always one of empowerment, but one of limitations driven not by gifting or calling or education but by gender.

In the corporate world, this kind of unseen barrier has been known since the 1980s as the “glass ceiling.” While it still exists in some places, the structural dimensions that propped it up – such as income disparity – have begun to crumble, many of them because of laudable work done by people of faith.

But while the church should be the place where women are the most free to express their God-given gifts of leadership, it has often been a place that unintentionally reinforces limits or quietly relegates women to leading other women, children or youth-only areas of ministry.

Thoughtful readers will need to be able to translate some of the language of the charismatic movement into their own vernacular, but on the balance the book is well worth the read.

The reader must also understand that although Silk succinctly explains valid interpretations of New Testament texts on headship, mutual submission and Paul’s statements on authority and teaching in 1 Timothy 2:11–15, this is not primarily a book on theology. It is a book to ask the question of why there are not more women being affirmed to leadership in places of significant decision-making such as eldership, pastoral leadership and conference boards.

The author makes some pragmatic suggestions, including ensuring that women receive the same access to development, training and leadership experiences as men, and asks how many women are offered visible leadership roles such as preaching.

One of the main challenges highlighted through the stories presented in this book is that a problem can’t be solved if we are not ready to admit it exists.

“Many men don’t notice this glass ceiling in the church, because it’s not intended to hold them back,” Silk observes. “They think equality is already a reality.”

While equality may be celebrated in many places, it needs to be more than ideological; it needs to be given visible and structural prominence in order for meaningful change to come.

In other words, we will know that equality is being expressed when we see local churches celebrating the differences between genders without diminishing one of them.

We will know that churches have had a robust and healthy conversation when leaders stop listening to their gender fears or biases and learn to appreciate the coordinating and complementary strengths that emerge when both men and women serve and lead together.

Brad Sumner leads the team of men and women who serve at Jericho Ridge Community Church, Langley, B.C. Their elders led the congregation through a discussion on Women In Ministry Leadership in 2009. Their journey and resources can be found at www.jerichoridge.com/resources/women-in-ministry-leadership/.

“If we preach and teach equality for men and women,” he asks, “why don’t we see this widely demonstrated by making room for qualified women to lead at every level – especially the senior, or most visible levels?”

The answer may be that many congregations, despite pressure from the world, and pressure from “progressive” denominational leadership, really know down deep that the Bible does not teach complete egalitarianism.

Areas of equality include: both genders are created in the image (likeness) of God; both are to “rule” and “subdue” the natural world; both are equally necessary to “fill the earth”; both, together, are “very good” (Adam alone was “not good”); both are moral beings: equally innocent at first, and equally guilty and requiring redemption now; under Mosaic law there was no double standard in cases of adultery, murder, or injury; extremely godly individuals, both male and female, are found in the Old Testament; both men and women are called to Christian discipleship; in Christ there is (in some sense) not “male and female”; and neither sex is independent of the other.

Areas of distinction include: many Mosaic laws were biased toward the authority of husbands over wives; political leaders (kings, judges) and spiritual leaders (priests, prophets) were generally male, with only a few notable exceptions mentioned; Christ’s original apostles were all male (though our Lord treated women sympathetically, and it’s significant that the first resurrection witnesses were female); many apostolic texts clearly recognize husbands as authoritative over wives (and the rationales are not merely ad hoc or culture-based); and women are encouraged to teach other women, and children, whereas they are told not to teach or exercise authority over men.

A good commentary on the not-quite-biblical concept of “mutual submission” between husband and wife can be found here: http://www.rockvalleybiblechurch.org/ResourceLibrary/MythOfMutualSubmission.htm