What's New
A FOCUS on Mission
Must Patience Be So Slow?
Harold Jantz: A Heart for the Mennonite Story
Lorlie Barkman: A Life of Creative Engagement
Last Days, First Days
Women in Ministry: Bertha Dyck
January Moment in Prayer “Holy Spirit—Fill Us!”
The Church as the Patient Body of Christ
Advent: Making Much of Jesus: Christmas Day
Advent: Making Much of Jesus: Fourth Advent
Home Arts & Culture A measured look at women and the Bible 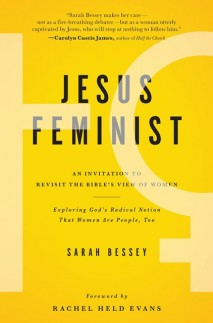 Jesus Feminist: An Invitation to Revisit the Bible’s View of Women
Sarah Bessey
Simon and Schuster

What do you think of when you hear the word feminist?

For some, the term conjures up the women’s suffrage movement, or workplace rights and equality. Others think of angry protests in the street or women’s liberation movements. Maybe it calls up your own experiences of being told what you could or could not do in the church.

The list of causes lining up to be associated with this word is a growing global phenomenon. People begin to nuance their conversation with clarifying adjectives like “micro-political” feminism or “post-structural” feminists.

But when you hear the word feminist, do you think of Jesus? What does it do to the conversation if you place “Christian” in front of the word?

Canadian author and blogger Sarah Bessey released a book-length treatment of that topic in her “invitation to revisit the Bible’s view of women.”

Of course, she’s being more that slightly provocative with her dual subtitle (are you even allowed to do that?!), Exploring God’s radical notion that women are people, too. No one among her detractors would assert that women are not people, but Bessey’s point is to draw us into conversation on the roles of men and women as she sees them described in Scripture. And although the title is confrontational, the tone of the book is quite the opposite. It is warm, invitational and thoughtful.

Bessey is clear and upfront about how her personal experiences in the charismatic movement and the American mega-church have shaped her both for the better and the worse. These are some of my favourite parts of the book in that they reverberate with the carefully chosen words of a practised but effortless writing talent. She has been hurt and marginalized but she emerges mostly un-cynical – which is rare and refreshing.

And it is from this place that she issues a clarion call to re-examine our own presuppositions in light of the meta-arc of redemption in which she sees the thread of Jesus-inspired feminism in Scripture. She wants the reader to wrestle with texts and tradition and form their own opinions, not to simply parrot back the answers of their favourite Bible teacher. Bessey wisely understands that “nothing changes in a true, God-lasting way when we use people or push agendas or make finger-pointing arguments or accusations of heresy.”

But she also pulls no punches in favour of Jesus feminism when she remarks that “the lack of women among the twelve disciples isn’t prescriptive or a precedent for exclusion of women any more than the choice of twelve Jewish men excludes Gentile men from leadership.” She insightfully notes that “when women are restricted from the service of God in any capacity, the Church is mistakenly allowing an imperfect male-dominated ancient culture to drive our understanding and practice of Christ’s redeeming work, instead of Jesus Christ and the whole of the Scriptures.”

In all of this, she is calling for respectful dialogue and mutuality, not an angry brand of feminism nor the abandonment of complementarianism nor the full embrace of unthinking egalitarianism. She is witty (you’ll love her description of women’s ministry events straight from the 1980s – unless your church still does that; then you may want to skip Chapter 8!) and the book is an easy, conversational read.

But at its heart, the book is really about faithful obedience to God in the big and small actions of life – yours and mine, male or female. It’s an honest recognition that “the Kingdom of God is bigger even than the Church’s failures and successes, disappointments, sell-outs, compromises and grand triumphs.” Because, in the end, Bessey is arguing that “biblical equality is not the endgame; it is one of the means to God’s big ending: all things redeemed, all things restored.”

And if that’s the case, perhaps we all need to change our tone, our tactics, and maybe even our preconceived definitions of Christian feminism.

Brad Sumner is pastor of Jericho Ridge Community Church, Langley, B.C. After the BFL resolution on Women in Ministry Leadership, his congregation embarked on a year-long communal discernment process (described in Renewing Identity and Mission) on the subject. This review first appeared on his blog, www.leadershipconfessions.typepad.com, Mar. 31, 2014.