What's New
How sweet the sound
One MCC Thrift Store Began With a Few...
A Hunger for Conversation
Getting the mental and emotional rest you need...
The Patience of God
2023 Spirit of MDS Fund accepting grant applications
October 2022 update from the CCMBC Executive Board
Arnold Community Church hosts block party to thank...
When Spring returns
An autumn reset
Home Life & Faithfeature articles Picking up the basin and the towel

Picking up the basin and the towel

Does footwashing still have a place in the church? 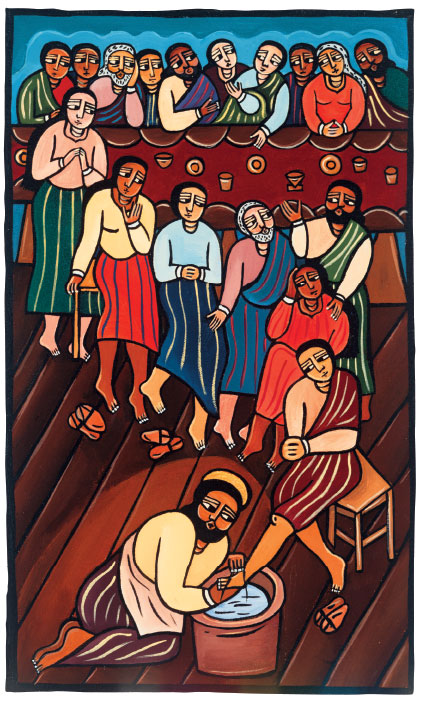 We switched taxis multiple times, just to lose anyone who might be following us, and finally arrived at an apartment where several house church leaders were waiting. In their North African country, converting from Islam to Christianity was a crime punishable by death.

We were there to build relationships with these young men and learn about the challenges and opportunities they face as church planters in their region. Given the security concerns and cultural differences, our conversation began cautiously. I (Randy) prayed for God’s guidance and favour.

As we talked, I clearly sensed the Spirit instructing me to wash the feet of these men. I initially dismissed the thought as impossible,especially in a cultural context where feet are considered unclean – showing the bottom of your feet to someone is the ultimate insult. I tried to set the thought aside, but the promptings grew stronger.

As I listened to the brothers’ story, I argued with God that the logistics of washing feet seemed unworkable. Finally, I asked to be excused to use the toilet. There, to my surprise, was a basin and towel sitting on the floor, as if prepared for me.

I re-entered the room and asked if I could wash the men’s feet. The leaders were surprised but said yes.

What followed can only be described as an outpouring of God’s love and presence. As we washed the feet of these young leaders and prayed for them, God melted away our cultural differences and fears. We became aware of our common need of God’s grace and love, as well as the presence of our leader, Jesus. Trust and friendship were established.

Footwashing around the globe

When Jesus gave his disciples the command in John 13:14–17 to wash each other’s feet and follow his example, he promised they would be blessed. In hundreds of footwashing settings over the past 30 years, I’ve experienced that blessing and have been reminded of Jesus’ words. 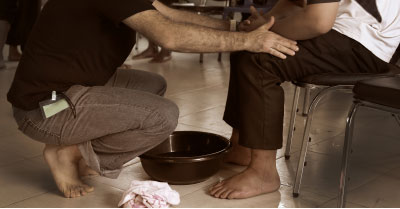 Footwashing has been part of the commissioning service for thousands of MB Mission short-term mission participants over the past 25 years, as they leave their discipleship training orientations and depart for assignments with SOAR, ACTION, or TREK programs. Footwashing has also become a regular feature of our International Community of Mennonite Brethren global meetings each year, when some 20 MB conference leaders from the around the world gather for equipping, reporting, and renewal.

At the February 2013 dedication of the new Hiebert Academic Center on the MB Centenary Bible College campus in Shamshabad, India, we learned that a statue of a person washing another’s feet would become the courtyard centrepiece of the redesigned common area. The MBCBC administration has adopted this symbol of servant leadership as their motto, along with the text, “not to be served, but to serve” (Mark 10:45).

Several days prior to the building dedication, North American and Indian leaders fanned out into five different regions to hold equipping seminars for Indian pastors and lay leaders. In one location, an Indian leader struggled to have his feet washed by a North American. Although he was a church planter in South India, his mother had served as a temple prostitute. Was he worthy of being served and honoured? Tears flowed as North Americans and Indians washed each other’s feet and embraced each other as one in Jesus.

Back on North American soil

While the practice of foot-washing has been growing in our international mission contexts, is it relevant to the local church here in North America? What is the history of footwashing among our Mennonite Brethren family? Are there transferable principles from John 13 that can help us understand the value of footwashing for Christ’s disciples today?

Of the major Reformation groups, Anabaptists were the only ones who picked up the footwashing practices of the early church.

Early Mennonite Brethren leaders practised footwashing in their house church meetings as a reminder of the values of humility, equality, and servanthood taught by Jesus, and usually connected it to the communion service. In the 1874 MB Confession of Faith, footwashing was treated as a general ordinance of the church. MB congregations universally practised footwashing from the 1860s until the 1920s.

When Mennonite Brethren immigrated to the United States, they brought the practice of footwashing with them. According to the Global Anabaptist Mennonite Encyclopedia Online, until the 1950s, as many as 85–90 percent of U.S. MB congregations still practised it regularly.

However, among the later Canadian MB immigrant churches formed in the 1920s, a minority practised footwashing. By the time the most recent MB Confession of Faith was drafted in 1999, the practice was so limited in MB churches that it wasn’t included in the Confession. (Although it is mentioned as a footnote to Article 6: Nature of the Church.)

Jesus’ example at the Last Supper

Perhaps a “rediscovery” of the value of footwashing in our current generation is occurring because it’s no longer a prescribed or routine practice of the church but a voluntary and thoughtful choice to apply Christ’s example at the Last Supper in contemporary ways.

The Last Supper has been popularized by paintings that place Jesus in the middle of a long rectangular table. In reality, the meal was probably served on a three-sided Roman “triclinium” table, says J.R. Woodward in Creating A Missional Culture. If this is the context for John’s account of the footwashing, which occurred at some point during the Passover meal, people would have sat around the outside of the table, and the order of seating would have been very important.

At the Roman triclinium table, the host usually sat second from the end, on the left side of the table, with his best friend to his right and the guest of honour to his left. The rest of the guests then sat in descending order of importance, ending with the last guest seated across from the host.

At the Last Supper, Jesus would have been the host, with John seated next to him as his closest friend. Beyond that, people speculate about which disciples sat where. We know the disciples often argued about who was the most important.

When Jesus says his betrayer is at the table with them, Peter calls across the table to John and asks him to ask Jesus who the betrayer is. Perhaps Peter has taken the last place at the table because he remembers Christ’s statement, “The last shall be first.” Of course, he doesn’t feel he deserves to be seated last. The role of the last person is to wash the feet of others, and we know that hasn’t happened yet. So there is probably some tension in the air that evening.

Jesus identifies his betrayer as the one who dips his bread into the dish with him. Only John, on one side, or Judas, on the other side, could reach the bowl. Judas is seated as the guest of honour, to Christ’s left. Interesting.

At some point in the meal, Jesus gets up and begins washing his disciples’ feet. This task should have been done when the guests first arrived by the lowest of servants. However, this supper is in a donated room, apparently without servants to greet them. When Jesus comes to Peter, Peter refuses to have his feet washed by Jesus. Interesting. Perhaps Peter feels if he shouldn’t be washing feet, neither should Jesus.

That night’s footwashing exposes a lot of positioning and thinking Jesus wants to confront.  Here are three brief takeaways for us today.

1. John begins his account of that Last Supper by saying, “Having loved his own who were in the world, [Jesus] now showed them the full extent of his love” (John 13:1). Footwashing was one of the ways Jesus communicated his love to his disciples, and one of the ways we also communicate our love to one another.

2. John goes on to say, “Jesus knew that the Father had put all things under his power, and that he had come from God and was returning to God; so…he wrapped a towel around his waist” (John 13:3, 4). Power in Christ’s kingdom is expressed in loving and serving others, even our enemies. Footwashing reminds us of that every time we do it.

3. When Jesus comes to wash Peter’s feet, Peter replies, “No, you shall never wash my feet” (John 13:8). Peter succinctly communicates the pride within all of us related to position, status, and honour. Footwashing exposes our pride and gives us an opportunity to receive and share the grace of God with each other.

In a culture where most of us shower or bathe daily, footwashing lacks the essential function that it served in Christ’s day. Some have suggested we should be washing each other’s cars or mowing each other’s lawns instead.

While that may be true, there is still something very personal and powerful when we simply follow Christ’s example of washing each other’s feet and praying for one another. This could be one of Jesus’ ways of renewing our love for each other today.

—Randy Friesen serves as the general director of MB Mission, the global mission agency of the Mennonite Brethren churches of the United States and Canada. Ray Harms-Wiebe is global program director for MB Mission. To learn more about footwashing in church history up to the current era, go to Global Anabaptist Mennonite Encyclopedia Online (www.gameo.org).

Artwork: Laura James is an artist and illustrator from New York. You can view more of her work in the newly released children’s book, Anna Carries Water, or at laurajamesart.com.