What's New
Through the conflict, life carries on in Ukraine
A FOCUS on Mission
Must Patience Be So Slow?
Harold Jantz: A Heart for the Mennonite Story
Lorlie Barkman: A Life of Creative Engagement
Last Days, First Days
Women in Ministry: Bertha Dyck
January Moment in Prayer “Holy Spirit—Fill Us!”
The Church as the Patient Body of Christ
Advent: Making Much of Jesus: Christmas Day
Home Arts & Culture Pastor sets stage for Spirit 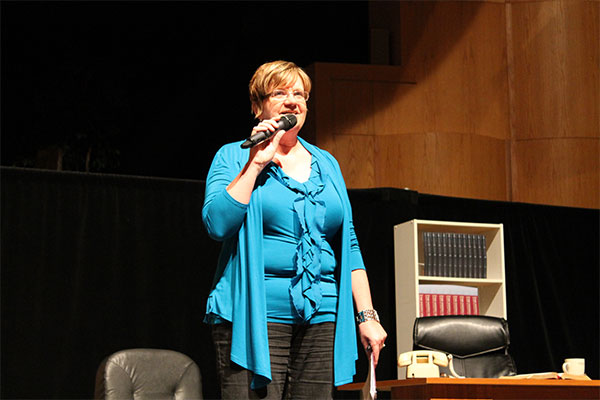 Dinah Elias’ love of theatre fits well with her role as worship director at Winkler (Man.) MB Church. She strives to harness her congregation’s latent creativity, channeling it into raw emotion.

“Drama brings a three-dimensional aspect to a sermon,” Elias says, adding it connects with church-goers and non-Christians alike by catching people off guard.

As director and playwright, Elias has been at the helm of everything from lavish multi-evening performances of Easter dramas with a cast of more than 100 to vignettes before the sermon in a morning service. And while she doesn’t seek overt messages, Elias doesn’t shy away from exploring controversial subjects.

“[People are] hungry for something they aren’t getting,” Elias says.

Her most recent drama, The Letters, is based on a true story about a pastor who must come to terms with his aging, atheist father. Elias adapted it for the stage from a book by Gregory A. Boyd and Edward K. Boyd.

“People sometimes need to be shaken up a bit,” Elias says, and the response from The Letters reveals people are looking for these experiences.

“I was surprised by how many people are hurting because of family members that have chosen a different path,” Elias says. “It gave them hope in the end. That’s the biggest message, there’s always hope.”

After three months of practice, Elias finds actors inhabit their roles, even changing the script. “They start saying, ‘I think my character would say this…’” Elias says.

“It’s a real privilege to write something and see it come to life.”

Kevin Hildebrand, who plays the father’s close friend Joe and fellow skeptic, is one who really “gets into it,” says Elias. 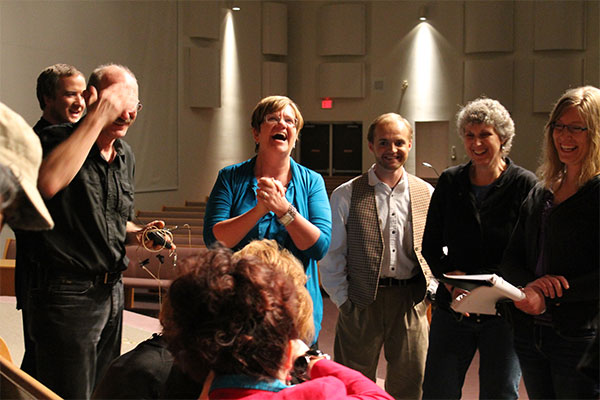 Over the years, Hildebrand’s participation in various productions has garnered praise from directors for his intensity on stage while portraying characters like John the Baptist, an antagonizing devil in youth productions, and most recently as the angry atheist Joe, his current role in The Letters.

For Hildebrand, the dramatic arts are another facet of building the kingdom of God.

“I don’t act for the sake of acting,” Hildebrand says. The roles he chooses always relate to issues in his life – usually painful ones. And 16 years’ work with teens in a parachurch organization has convinced him everyone struggles.

“We’ve all lived broken lives,” he says, and it’s the reason the roles he takes are about asking questions. “Maybe someone can look at the role I’m playing and see that they’re not alone in what they’re going through.”

It’s opened doors for people to ask questions, and provided opportunity to share his testimony and create a connection.

“The Holy Spirit can do that,” Hildebrand says.

“As a church we should be dealing with these issues, but we don’t. We can use drama to get into those places in someone’s life, and they are messy, dirty areas,” Hildebrand says. “Everyone is a great actor; we act like we’re perfectly put together when our marriage, business, or home life is falling apart.”

However, drama isn’t always the most obvious choice when Christians think of worship.

“I just wish that we had more avenues for creative people in the church,” Elias says, adding it can be challenging to fit a drama into an hour-long service.

Though acting can be intimidating, Elias finds most people who try the dramatic arts surprise themselves.

“We don’t give ourselves enough credit,” Elias says. She’s found many great actors in the congregation simply by giving them a small role, and she hopes more people watching will get hooked and want to get involved.

Since The Letters’ Apr. 27–28 run at Winkler MB, other churches and venues have called inviting performances or asking for the script. Hearing from many who’ve been moved by her stories, she credits the Holy Spirit, highlighting the importance of inviting the Spirit into every aspect including writing, casting, and performing.

“God does amazing things when we ask him to be a part of what we’re doing,” Elias says. “God shows us in little ways, well done. You know God was pleased.”

—Steven Sukkau is a reporter at a local newspaper in southern Manitoba. He’s a member of Winkler (Man.) MB Church, where he and his wife Kayla teach the high school Sunday school class.

How to turn an electric toy to evangelistic...

Too busy to learn about Jesus?

Ready to respond to the Spirit?