What's New
Ask God which town
Where to from here?
CCMBC National Director attends 2022 ICOMB Summit
MCC Canada and MCC Manitoba sell shared property...
The world appears to be growing darker
Sharing a new and unified language
6 reasons to attend the MWC Global Assembly...
One too many
Just one more
A safe place in Winnipeg
Home News Ready to respond to the Spirit?

Ready to respond to the Spirit? 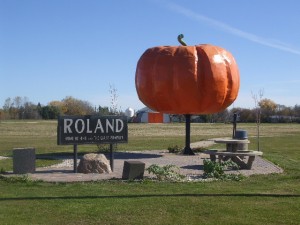 Roland, Man., is home to the world’s largest pumpkin, a tribute to citizen Edgar VanWyck who earned a Guinness World Records for largest pumpkin in 1977. PHOTO: courtesy loveisinthedetails.ca

Phillip Vallelly says he’s learning to take the Holy Spirit out of his “neat, little package.”

“I’m hearing things I never heard before,” says Vallelly. “And I have a deepening sense of urgency – that God doesn’t want anyone to perish.

“But here’s the tricky bit: I’m reminded that people who respond out of a sense of urgency are often called to respond to something that seems crazy and even impossible. What if you were asked to walk around naked and barefoot (Isaiah 20:3) or to take off your underwear and hide it under a rock (Jeremiah 13:4)? Bizarre. But those folks were willing to do what God asked them to do. They were willing to respond.”

Last fall, Vallelly felt the Spirit’s urge to drive to the nearby community of Roland, Man., to have coffee. Stumbling upon the coffee klatsch corner in the local grocery store, he sat and chatted with about 15 seniors who regularly met there.

After returning several times to visit with the little group, “there was a deep sense in my heart that the Spirit of God was telling me to ask them about Jesus. Let me tell you, having coffee is relatively easy until you bring the ‘J’ word into the conversation.” 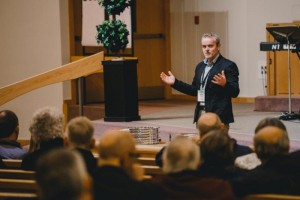 When he finally obeyed the Spirit’s prompting, one grandma whacked Vallelly over the head with a newspaper, and another scolded, “We don’t talk about religion here!” One 86-year-old declared, “I’m too busy [to learn about Jesus].”

As Vallelly drove home, he didn’t know whether to laugh or cry. “I had met people who didn’t know Jesus. It was fantastic! But now I’m scared every time I open the newspaper – I’m afraid I’ll see one of their pictures in the obituary section. Ultimately, the end goal is reaching people for Jesus.”

The urgent piece is a no-brainer, says Vallelly. The question is whether we will respond to the Spirit’s prompting, no matter how crazy it seems – even if it means taking a drive to a village of 300 people (whose claim to fame is a giant pumpkin) to share the gospel.