What's New
A FOCUS on Mission
Must Patience Be So Slow?
Harold Jantz: A Heart for the Mennonite Story
Lorlie Barkman: A Life of Creative Engagement
Last Days, First Days
Women in Ministry: Bertha Dyck
January Moment in Prayer “Holy Spirit—Fill Us!”
The Church as the Patient Body of Christ
Advent: Making Much of Jesus: Christmas Day
Advent: Making Much of Jesus: Fourth Advent
Home MB HeraldColumns Learning to bear witness 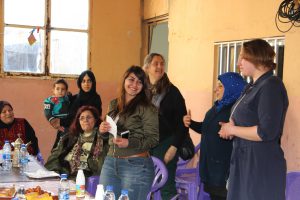 What all comes to mind when you hear the phrase “being a witness”? Does it necessitate speaking or being active? Can one bear witness simply by listening? I believe the answer to this last question is yes!

In March, through the Canadian Foodgrains Bank (CFGB), I had the opportunity to join a Food Security Learning Tour to Lebanon. Over 10 days, eight others and I witnessed stories of both adversity and hope, and acts of compassion and solidarity as we enjoyed the beauty, culture and wonderful hospitality of the people we met in Lebanon.

The goal of the learning tour was not to offer solutions but to hear people’s experiences, not to bring judgment but curiosity, and to keep listening even when stories are hard and uncomfortable. “It gives people dignity that we came to hear their story,” says Naomi Enns, representative for Mennonite Central Committee (MCC) in Syria/Lebanon.

I bore witness to stories of loss, hardship and struggle. In one community in the Beqaa Valley, a pastor estimated that within a 10-km radius there are 300,000–400,000 Syrian refugees. Currently, this pastor’s church, among other supports, runs a distribution centre that provides 1,400 monthly food baskets through Foodgrains Bank support. This supplementary food basket may allow a refugee family to use their own money to pay rent, which in this region often means access to a small parcel of land to set up a tent structure. (Though Syrian refugees may receive some UN support for items such as water, electrical generators, or tenting material, the Lebanese government has not permitted official refugee camps to be established).

I bore witness to stories of resilience and solidarity. Lebanon, with a population of 4 million people, is now hosting more than one million (perhaps closer to two) Syrian refugees in a country of only 10,452 square kilometres (one-third the size of Vancouver Island). This includes Syrian-born Palestinians who were displaced from their homeland 70 years ago and are again having to find their way in a new context. One of MCC’s local partners is working to mobilize Lebanese-born Palestinian people, who themselves lack full rights as Lebanese citizens, to host a new wave of people needing support.

I bore witness to Muslim and Christian heroes who are acting tirelessly, even after six long years, to bring food and hope to many families who have fled to rural communities in Syria often overlooked by larger food aid programs. CFGB is helping to fill this gap in food aid!

I bore witness to individuals, churches and organizations whose combination of Christ-centredness and deep knowledge of their historical and cultural context places them in a unique role as peacemakers in their land.

I bore witness to the deep gratitude that many people from Lebanon and Syria feel toward the churches in Canada who (along with the Canadian government) financially support the Foodgrains Bank. Through partner agencies, this money provides vouchers or food baskets to thousands of refugee families. One mother spoke of her joy when seeing the smile on her child’s face as they take their voucher to a local grocery store. We heard many times, “This small gift is a big gift for refugees.”

Each day, I bore witness to the complexity of Lebanon’s history. For example, the town of Byblos, which has been inhabited for 8,000 years, includes archaeological remains from the Stone Age and ancient Phoenician times, and a Roman amphitheater and a Crusader castle from later periods. Earlier in the week, as we travelled up to “the Cedars” (mentioned 70 times in the Bible), we passed Christian and Muslim minority communities who have sought refuge on Mount Lebanon since the beginning of the sixth century AD. These groups are some of the 18 different recognized sects who have a legal role in the current democratic political system established upon independence in 1943.

As I bore witness to all of these stories and listened to my fellow tour participants, I heard many diverse perspectives. This rich experience left me with at least two profound invitations from God. First, that learning to listen to “the other” plays a central role in carrying out my Christ-given ministry of reconciliation, and second, that there is much folly in making firm conclusions about a people group (or person) whose experience and story is not my own. Good lessons for wherever life may take me.

Finally, I bore witness that God can move through people when they open themselves to acts of compassion that break down barriers of comforts, conflict and fears. I saw transformation when we simply love our neighbours as ourselves.

[Jacqueline Block is a member of Faith River Church, Saskatoon, Sask. She and her husband Rick are Canadian Foodgrains Bank representatives for Saskatchewan.