Love and Joy in the Spirit

“It’s all about love.” This was the message of PK, one of the leaders of the work among the Khmu, on the final night of The Church on Mission, Thailand 2017, held at The Tide Resort, Chonburi, Thailand.

“Love God. Love the Divine Community (the church). Love the world as Christ did.” These points anchored David Wiebe’s opening message. Wiebe is executive director of ICOMB, the International Community of Mennonite Brethren, which called this historic consultation on mission and prayer in partnership with MB Mission.

Certainly, love and charity prevailed as the 240 delegates from 36 countries assembled Mar. 7–12, 2017, to talk and pray about mission. They were leaders of 21 well-established Mennonite Brethren conferences and some 17 new associations under MB Mission. In most cases, they sent their principal leader plus a mission or church planting coordinator. In some cases, like the Spanish conference from Paraguay (Convención Evangélica de Iglesias Paraguayas Hermanos Menonitas), they sent many more – at their own expense – to absorb the event as a boost to their mission vision.

The mission in keynotes

“There is only one mission,” said Arthur Dück of Brazil, quoting Wilbert R. Shenk; “the authority for all missionary action is the missio Dei. Our efforts and actions must be submitted to the priority of God’s missional purpose.”

The church is the body of Christ in the world for the sake of the world, Dück said. “Mission is not primarily our activity or initiative, but God’s people participating in God’s purpose to redeem all creation.”

Dück was one of nine conference and mission leaders who presented plenary addresses on aspects of mission and prayer. In fact, his “The Mission of the Church: Clarifying the Missio Dei,” and Martin Eitzen’s “Worker Preparation: An extension of discipleship” on the role and value of education in formal and non-formal ways were last-hour substitutions. “It’s a testimony to the ‘bench strength’ of the Mennonite Brethren when we can draw on our community at a moment’s notice for quality input,” says Wiebe.

Johann Matthies of Germany pictured the world on the move: 244 million people are migrants, refugees and stateless. Top hosting countries are Jordan, Ethiopia, Iran, Lebanon, Pakistan and Turkey. North America manages nowhere near the numbers these countries deal with. Despite fear-mongering of government and media voices, Christians are caring for refugees, drawing them to Christ, said Matthies. “We live in times of unprecedented opportunity to share the gospel in holistic ways to the waves of people coming to our doorsteps.”

Randy Friesen of MB Mission spoke of an “everywhere to everywhere” mission. Expatriate workers support energetic missional leaders who plant churches and start conferences in difficult places where the gospel is costly. Our work among the Khmu is one. “The gospel is not costly for North Americans; should we not step into that cost with others?” Friesen asked. Serving refugees is a small beginning. 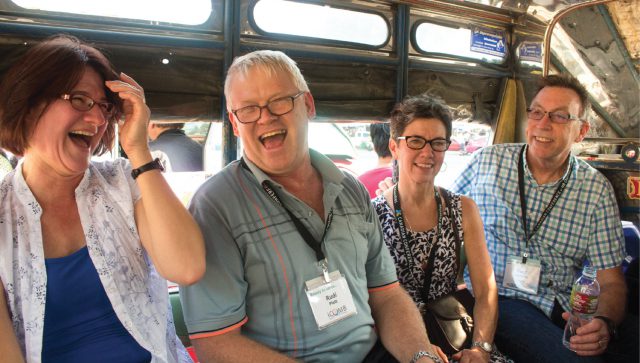 The geographical centre of Christianity is currently in northwest Africa trending southeast. For Mennonite Brethren, it is somewhere between Congo and India, our two largest conferences. This begs reflection on how MB mission praxis and strategy respond to this reality.

For a truly “everywhere to everywhere gospel,” Wiebe called for a message that reflects not just the legal gospel most familiar in North America (Christ paid the penalty for sin – Colossians 1:14), but also the gospel that empowers (Christ defeated all powers – Colossians 1:13–16) and the gospel that lifts us from shame to honour (Philippians 2:5–11). The latter are metaphors with more contextual power in the rest of the world.

The mission from the Word

Each morning, a different continental representative presented a Bible study.

Naadanong Silachotboriboon (widely known as “Pastor Naat”) was once a housekeeper for missionaries David and Louise Sinclair-Peters, but God called her to ministry and leadership. She has planted four churches in the region of Chonburi, and continues to pioneer ministry in new areas.

“Recognize the call of God on your life, keep the vision and move forward no matter what,” Pastor Naat instructed in her Bible study on Ephesians 3. “Take time to repent before God daily…. Trust in God and go after what God has called you do…. Don’t be afraid; as you go forward with passion, God will add to your faith, knowledge, fruitfulness.”

Pastor Mvwala Katshinga of DR Congo proclaimed there is One Spirit (Ephesians 4), preaching in the powerful style of Congolese MBs, highlighting the call to women for mission. “Is there one Holy Spirit for men, and another Holy Spirit for women? No! And the Spirit calls us together on mission…. It’s God who gives the gifts; a church on mission breaks the walls of separation…. We are all one in service.”

Pastor Ada De Mencia of Paraguay called the assembly to be open to the Holy Spirit and to confess that we haven’t allowed him to fill and use us as he wants (Ephesians 5). And an evangelist from Turkey called Mennonite Brethren to arm ourselves for the spiritual warfare that’s upon us (Ephesians 6). 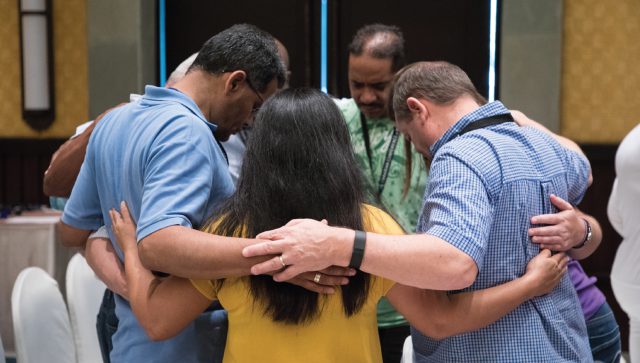 “Where people are praying, the Holy Spirit is being poured out and the church is advancing through mission.”
—Esther Corbett

The mission through prayer

Prayer, the event’s parallel theme, complemented everything in practice, example and teaching. All sessions provided opportunity to pray.

On the second night, Paul Dück and Reginaldo Valim of Brazil shared how the Holy Spirit revolutionized Valim’s life and vocation, resulting in his ministry of intercession. A call of response had everyone on their knees, opening their hearts to God.

Prayer rooms and workshops offered practical opportunities to pray and learn about prayer. At the ALH Orphanage, consultation participants provided a “Fire Tunnel” for all the orphans to run through: all delegates paired up, holding hands high in a long line of 120 pairs. While the children ran underneath, all prayed out loud at once for God to bless them.

“For many participants, the activities coming from all corners of the globe were new practices,” says Wiebe. Some of the Latin Americans raised concerns about apostolic expressions based on the troubled charismatic practices they see at home. “Discomfort is part of an international gathering.” 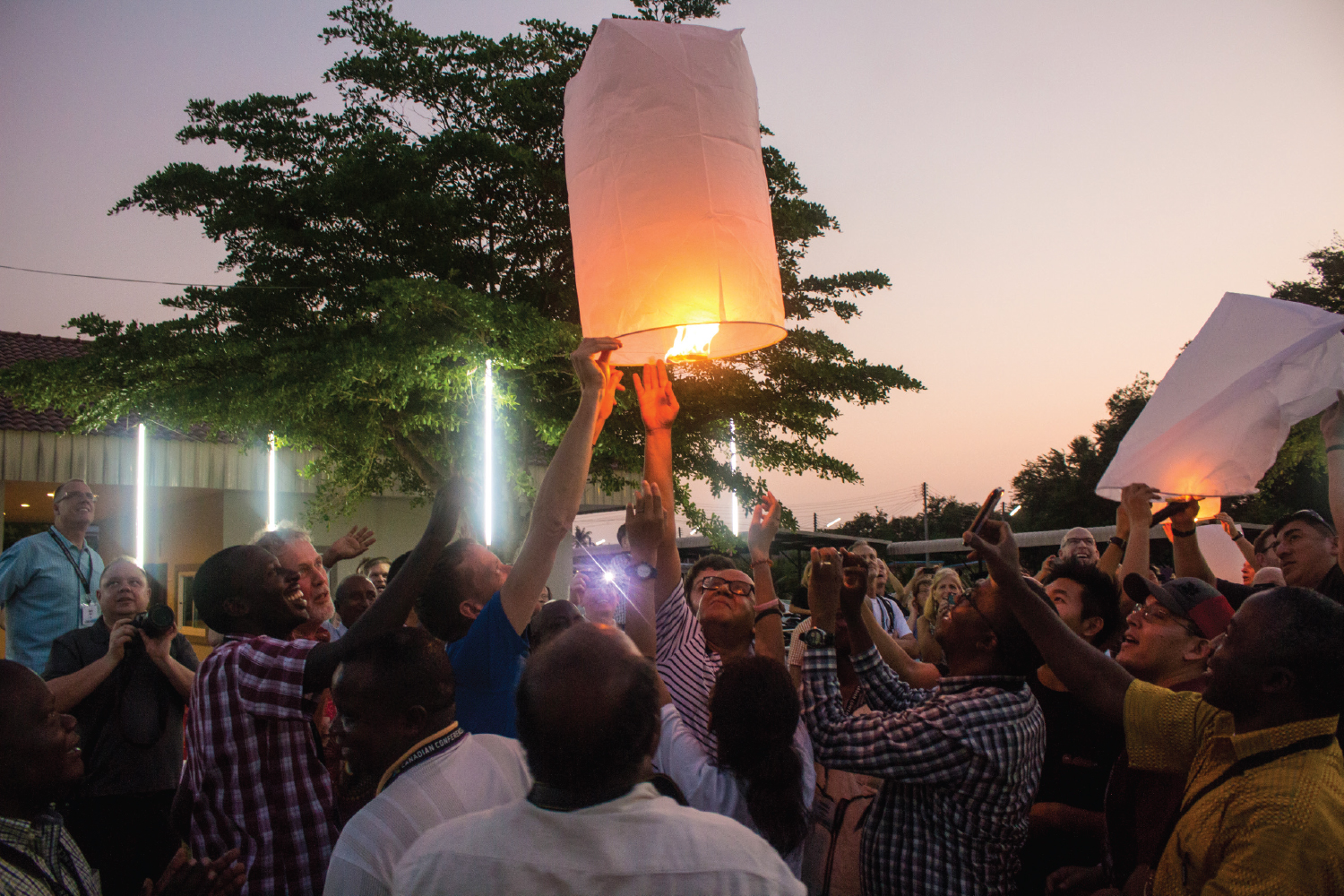 A Saturday morning session on prayer was another participatory experience. “I believe God was speaking deeply and directly to everyone in the room,” says Discipleship On Mission intern Katie Vogt who participated in the event under the MB Mission program. “It was such a beautiful moment to share with amazingly gifted believers from around the world,” she said.

The atmosphere of love and unity prevailed despite the inevitable misunderstandings of a cross-cultural meeting. This global gathering provided opportunity to make many new contacts. Most of the emerging network leaders had never met such a large body of the MB family. “The sense of belonging was palpable,” says Wiebe. ICOMB received at least half a dozen requests from associations to join as full members.

“As a diverse ICOMB family of churches, God has given us a diverse set of gifts in order to reach a very diverse world with the gospel,” said the listening committee in their report on the consultation. Recommendations arising from the consultation included making time for prayer and intercession, empowering women, increasing awareness about interdependent ministry with other Anabaptist churches and recommitting to being a church on mission in “radical imitation of Jesus [through] forgiveness and love.” 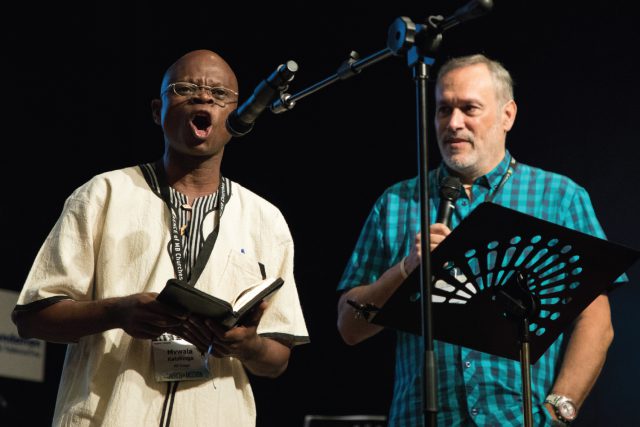 “When you break barriers, there are people who cannot understand why you do that,” says Mvwala Katshinga (left) with the help of translator José Arrais. “It is God, the Holy Spirit, who commands us to go do this.”

The mission in business

At the ICOMB summit Mar. 13–14, 2017, groups processed what they heard and how they will transfer those into goals. Each conference was encouraged to envision several specific mission initiatives. “We received very much from the meeting,” said Jean-Claude-Ambeke of the MB church in Angola (Igreja Evangelica dos Irmaos Menonitas en Angola). “We are leaving inspired, with models for our meetings.” Darío Ramírez of the Paraguay (Spanish) conference reported that nine pastors from his delegation heard a call about church planting a mission.

The final summit day provided occasion to dedicate Rudi Plett as the new associate director (half-time) with focus on serving the churches of Latin America. The ICOMB representatives also mandated David Wiebe to revise the membership pathway, to signal belonging while a group is still fledgling in size and structure but strong in spiritual life and witness. “The impact from these emerging groups in faith, hope and love is much needed among the established MB conferences, while the older groups can mentor and provide sustaining body life,” says Wiebe.

Education to sustain discipleship and build theological strength as an accompaniment to spiritual renewal is an ongoing concern. For the 2018 summit, ICOMB will develop a system to “map” formal and non-formal opportunities for pastoral and leadership development in each continent, while developing a certificate of recognition for those who complete non-formal training.

The 2018 ICOMB summit in Vienna, Austria, anticipated to be a “simpler, quieter gathering,” will further develop these pathways.

Voices from the gatherings: 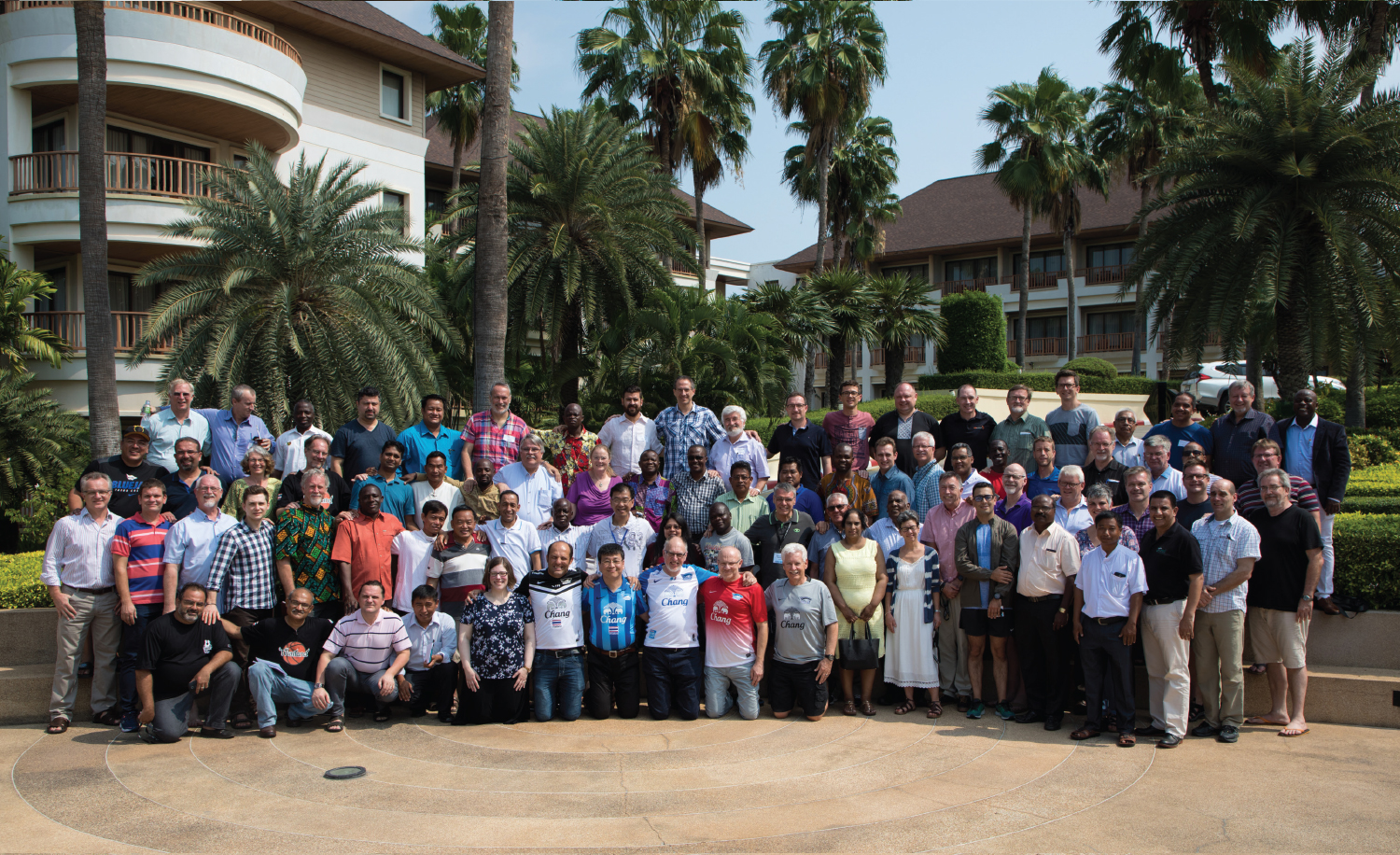 It was an amazing, fantastic, phenomenal time with dear brothers from all over the world…literally!!! What a great example of diversity in all sorts of things…if we look to the last picture it’s possible to see that!!!