What's New
MWC Assembly small but full of joy
Bad back doesn’t hold back MDS volunteer
Transition in CCMBC National Faith and Life Leadership
Leading through the trauma of covid: Part three...
The church distracted: When the main thing is...
Remote wilderness rescue turns into service with MDS...
How open is your mind?
Following Jesus together across barriers
2022 National Faith & Life report to the...
CCMBC 2022 national assembly summary
Home News God guides along a twisting path

God guides along a twisting path

“We can make our plans, but the LORD determines our steps” (Proverbs 16:9 NLT). 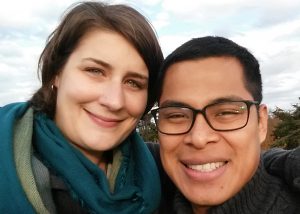 It takes many steps to join two lives from Canada and Guatemala in God’s service. As Kim and Jon Pelen of Cedar Park MB Church (Ladner, B.C.) learned, those steps often include difficult, but wonderful, surprises.

Kim grew up in Lower Mainland, B.C., and trained as an accountant. She had a heart for missions, but her application to serve in India wasn’t accepted. She planned to travel to Africa with a missions group, but one month before departure, a required vaccination for Yellow Fever changed everything. Her medication for Crohn’s disease was not compatible with any live vaccines. Once again, her plan ended with disappointment. Finally, a relative told her about a group travelling to Guatemala, and Kim was on her way within the month.

Born in Villa Nueva, Guatemala, Jon lived in the New Life Children’s Home from age two. He learned English and various trades. He worked hard to obtain diplomas in tourism and business administration, wondering how God would use him. The special attention Jon received from Christians who came to the school lit in him a desire to become a servant of the Lord. Jon was aware of the needs in his hometown, and a passion to serve his neighbours led him to become a full-time missionary.

Kim’s first trip to Guatemala was followed by many more. In 2013, on her fourth visit, Jon was her group’s interpreter. Because of Kim’s inclination to immerse herself in the culture, rather than sticking with her group, she ate with the local people. At one of these meals, she met Jon, and “sparks flew between us.”

On Kim’s last day in Guatemala, Jon asked for her contact information. May 2, 2015, the couple exchanged wedding vows in Guatemala before family and friends.

Kim and Jon made a five-year plan to train and serve God together in Guatemala. A first step was to return to Kim’s home in Canada to raise support. There, Kim attended a follow-up with the doctor overseeing her treatment. What she learned in that hour-long appointment brought their five-year plan crashing down.

Kim’s Crohn’s disease was again active. Her only option was an experimental drug. This medication and the extensive follow-up it required were only available in Canada. Her doctor strongly advised against travel to Guatemala.

Their priority now revolved around staying together, which meant making inquiries about Jon’s immigration status. They learned he had to apply for permanent residency – which could take up to two years. In the meantime, he couldn’t travel outside Canada, and he couldn’t work for wages until he received a work permit.

Once again, God determined their steps. 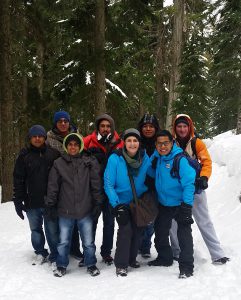 It wasn’t long before they discovered the Migrant Workers Ministry of B.C. in their hometown of Ladner. There were some 400 Spanish-speaking workers from Guatemala and Mexico in nearby Delta, B.C.’s greenhouse industry. These men leave home for months at a time to support their families by harvesting vegetables.

“When we couldn’t get to Guatemala, God brought Guatemala to us!” he says.

Jon befriends the men and helps them integrate into their new surroundings. He meets with their employers to ensure there are no barriers to entering the workers’ residences. The employers have embraced Jon’s enthusiasm.

Jon’s greatest desire is to minister to spiritual needs. “The point is to introduce them to Christ,” says Jon. Most of the workers are husbands and fathers; if their hearts are changed, they may lead the change for their families.

Jon acts as an interpreter in the community. He helps the men learn English using Spanish-to-English Bibles, and arranges for church services and Bible studies. He has also lined up opportunities for them to participate in sports, use the nearby community centre and visit tourist sites.

Kim completed the extensive paperwork for Jon. They counted it a small miracle when Jon’s work permit arrived the same day his visitor’s permit expired. The permanent residency application is in progress.

Jon and Kim still harbour the dream of returning to Guatemala to serve God together, but while in Canada, they hope to develop their volunteer work into a full-time ministry – in this way still loving and serving Guatemalan people.

The process hasn’t been easy, but seeing God has determined their steps this far, they are content to wait and see what he has planned.

[Barbara Armstrong is a member of Cedar Park Church.

Jon and Kim have such big servant hearts! They are really providing ‘community’ for these migrant workers so far from home and family. It was fun to join their preparations for Christmas baskets and to know Cedar Park wholeheartedly supports their work.