What's New
First loads of hay from MDS Hay West...
The Written Word Versus the Living Word
Go, sit in your cell, and your cell...
EXIT
Keeping Jesus in the conversation
Fall 2021 CCMBC Executive Board update
CCMBC appoints interim NFLT director
From the Editor – September 2021
The Highways of Zion
A holistic gospel
Home Life & Faithfeature articles Four speakers, one message, one mission

The Canadian Conference of MB Churches (CCMBC) turned to its own to challenge and inspire delegates at Gathering 2012. At a time of vital

Delegates did respond to the sense of urgency that arose in many addresses and discussions. Most also responded in prayers of rededication, when MB Mission director Randy Friesen provided opportunity in Friday night’s plenary session.importance to the national conference, the invitation to convention called delegates to hear vision, build community, contribute to discussions and decisions shaping CCMBC ministries, and worship through music, community, and teaching. The theme was One Lord, One Church, One Mission. 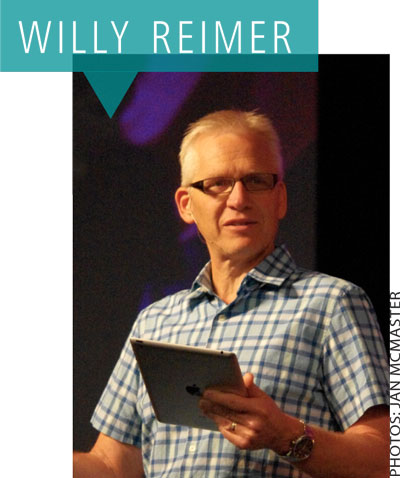 CCMBC executive director Willy Reimer, drawing on 1 Corinthians, said a parallel remains between the early church and our own, as we face similar challenges. He urged delegates to depend on the Holy Spirit today, just as believers did then, and to resist distractions.

C2C director Gord Fleming exhorted delegates to realize the importance of these times in Canada, and the urgency of answering God’s call to mission.

MB Mission general director Randy Friesen spoke of discipleship and the need to understand obedience to Christ, day by day, no matter where we are.

The executive director of the Canadian conference says Mennonite Brethren have an “unbelievable opportunity” to attract Canadians to Christ – as much as the early Corinthian church had, and in circumstances similar to ancient Corinth with its wealth and distractions.

Opening Gathering 2012 in Winnipeg, Willy Reimer spoke of the growing sense of urgency within the conference to take the challenge God has laid before us, and become more effective in reaching Canadians with the good news of Jesus’ salvation.

He said the greatest challenge we face is unity. We waste so much energy, he said, especially when we are fearful. We fear the loss of our Anabaptist-evangelical identity. We fear that we’re moving away from the core of the gospel. We fear our leadership, and worry they’ll betray us.

But, said Reimer, we must remember “we are only servants. God is the one making all this happen. We simply have to attract people to Jesus. It’s not about being ‘cool’, or ‘innovative,’ or ‘creative.’ We need to be like Paul, who said, ‘I simply give them Jesus.’”

Using 1 Corinthians 3:1–4 as his primary text, Reimer spoke of the humanness and shortcomings of the Corinthians, which Paul addressed in his letters. And, just like the Corinthians, we mess up. We become just as distracted and fearful. “We want the glorious stuff,” said Reimer. “We don’t want the work.”

“Yet, we do feel an urgency, as a body of believers, and we’re focused on becoming an increasingly missional people. Canadians are hungry for a vibrant expression of the gospel. ” To become more missional, we must focus on “reaching the lost and growing the found.”

In the end, “all we have is Christ. Any other foundation will not pass the test.” 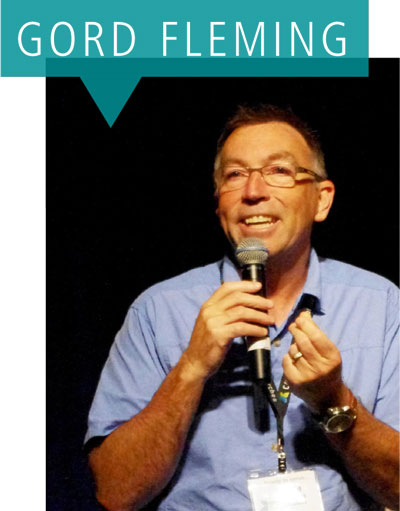 C2C Network’s Gord Fleming delivered a passionate plea to pay attention to the urgency of the times. His keynote speech followed a video that highlighted the work of church planters across Canada. “I know those planters,” he said. “God is doing something amazing in Canada.” The recently formed C2C Network is a response to God’s call to his people to reach Canadians with the gospel.

Our country is diverse and changing, Fleming said – adding that even Mennonite Brethren face this diversity. MBs in Canada don’t share the same ethnicity, he said. “We honour our heritage, but it’s not the thing that unites us.”

Fleming said he brings no special qualifications as head of the C2C Network and “didn’t come up here as an expert.” He said his qualifications come from 1 Timothy. “The cross is equal ground. I come to you as a brother in the Lord.”

He invited MBs (notwithstanding any non-dancing roots!) to participate in a dance, a traditional Scottish ceilidh (Fleming’s own ethnic origin). In a ceilidh, people gather in a circle, with no one in the middle. The dancing is full of energy and passion, said Fleming, and so should we be.

He referenced C.S. Lewis, who says that we, the bride of Christ, are meant to dance in the same way the Father, Son, and Spirit dance. Fleming said humans want to be at the centre; we want to be right. But the Trinity models submission to one another in mutual, self-giving love. “Each person of the Trinity voluntarily circles around the others. Watch the dancing,” said Fleming.

The urgency that many Christians feel in Canada – to reach out with the good news of the gospel – requires the same energy and passion of a ceilidh. “So, come. Enter the dance. This is exactly what you were created for.” 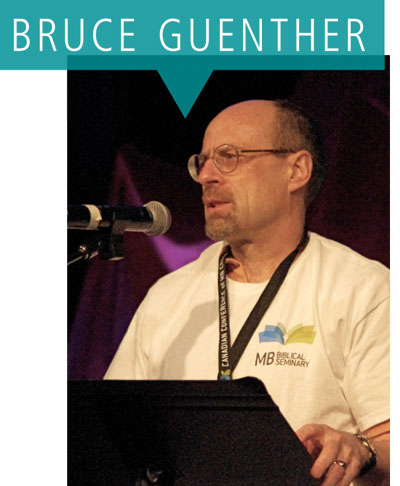 The president of Mennonite Brethren Biblical Seminary Canada talked about unity, because “unity in the body (of believers) is essential.” Paul urged Christians in ancient Ephesus to “make every effort to keep the unity of the Spirit through the bond of peace” (4:3). Bruce Guenther urged Canadian MBs to do the same. When delegates fill out their evaluation forms on facilities and speakers at convention, he said, they should also evaluate themselves – whether they made every effort.

Unity depends on our character and conduct with one another, Guenther said, and added that Paul, in Ephesians 4:2, urges Christians to “make allowances” (NLT) for one another’s faults in love and humility. All of us make mistakes, he said, and no one should use another’s error to cause conflict.

Guenther said differences don’t mean we aren’t unified: “Unity doesn’t necessarily mean unanimity.” He said there will always be differences among people, but what’s important is never to withdraw from the conversation.

Paul lists dogged determination and humility as the first of five qualities important to unity. Humility, in Greek (according to F.F. Bruce) refers to the crouching submissiveness of a dog, said Guenther. Jesus came as a servant and demonstrated the type of “crouching” humility essential for effective leadership and unity.

Guenther said there are other ways to foster unity. For example, we must avoid polarizing language that puts opponents in other “camps” or “silos.” He said we should stop talking about our evangelical-Anabaptist identity as containing opposite ends of a spectrum. It’s not accurate historically, he said, and helps nothing: evangelical-Anabaptist belief is, in fact, a hybrid derived from both movements.

Guenther warned that denominationalism can follow from sinful spiritual elitism. He said Paul, in the first three chapters of Ephesians, identifies a central theme – Jesus. It’s through Jesus that God provides salvation and reconciliation, a new body, new people in a new society. That’s why Paul speaks with such intense verbs – such as “I beg you,” and “make every effort.”

We are diverse and need each other, Guenther said. If we take Paul’s words to heart – offering patience, making allowances, showing love – we will reflect the diversity of the Godhead.

To Randy Friesen, general director of MB Mission, there is a profound difference between being a convert and being a committed disciple of Christ. He urged delegates at Gathering 2012 to take a fresh look at Jesus’ great commission in Matthew 28:18–20 – from the standpoint of discipleship.

“Are we making converts or disciples?” asked Friesen. Converts believe and confess, he said, but disciples believe, confess, obey, and follow. The “heavy lifting” starts with encountering and obeying Jesus. 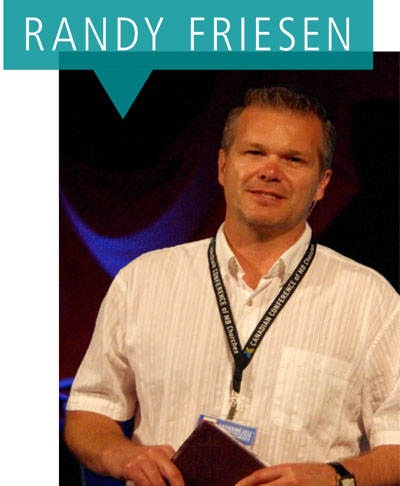 Friesen said it’s easy to make a convert – it requires just a prayer. “Sometimes,” he said, “[this type of conversion evangelism] is more about us than them. We need to be careful how we proclaim the gospel.”

Friesen said we need to see baptism in the right light, too. “You can’t baptize yourself.” By definition, we are baptized into a community, a family of believers following Jesus together. Friesen said, “The tragedy is that many of us in the Western world see baptism as the end. But, in fact, it’s only the starting point.”

Friesen said Jesus told his disciples he has “all authority in heaven and on earth” (John 17; Matthew 28). Friesen said Jesus is the king, and his followers are called, not just to manage our sin, but to be citizens in Christ’s kingdom, taking on its identity and living with a commitment that’s irrevocable as we serve – as disciples.

He said Jesus’ command to go and make disciples is a mission. “The Holy Spirit is going. The mission is all around us. It’s every day. If we don’t go, we won’t grow.”

Whether across the hall or across the world, “God is calling us to go in his authority.” He said Jesus promised he would be with us until the end of the age, calling us to pay attention, and saying, “Don’t forget my presence is with you.” Friesen said, “Believers in challenging corners of the world, lacking baptism, lacking community, lacking a Bible to hold in their hand, take comfort in this promise.”

He said we should remember Jesus, who declared he was the fulfillment of Isaiah’s prophecy. “How do you go from getting a standing ovation [at the Triumphal Entry] to getting thrown over a cliff?” Friesen asked. “What gospel are we communicating?”

By being a disciple, “we too declare that we will lay down our lives.” There are sticking points, said Friesen, and that’s when we need community.

“We’ve got to get up in the morning and say, ‘Jesus, I’m available. Give me opportunity to live and share this good news today.’” When it comes to evangelism, Friesen “doesn’t always know what to say. But God has a key for every person. There are an unlimited number of ways to share the gospel. We’ve got to listen before we speak, both to people and to the Holy Spirit.”