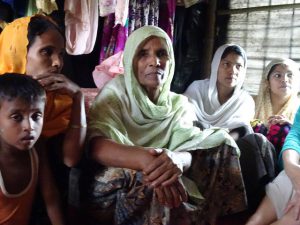 All 3,000 houses in Safiri’s village were burned to the ground, and her husband was shot. Fearing for their safety, Safiri and her 12 children fled before the Myanmar army showed up at nightfall. PHOTO: World Renew

Canadian Foodgrains Bank members have come together in response to the needs of Rohingya refugees in Bangladesh, where over half a million people have fled extreme violence in Myanmar in search of safety and freedom.

In addition, the Canadian Government has approved $1 million to support this joint response which is being implemented through Foodgrains Bank members Emergency Relief and Development Overseas (ERDO) and World Renew in collaboration with their local partners.

“Canada is proud to support Canadian organisations working tirelessly and collaboratively to raise funds for some of the poorest communities abroad,” says Minister of International Development Marie-Claude Bibeau, who made the announcement.

“These initiatives will ensure that the thousands of Rohingya families who have had to flee their homes still have nutritious food to eat during this time of crisis.”

The two projects just announced will meet the food needs of over 25,000 Rohingya refugees living in informal settlements in Bangladesh.

“We are tremendously grateful that because of ongoing support from the Government of Canada, we are able to respond more substantially to this rapidly developing crisis than would otherwise be possible,” says Foodgrains Bank Executive Director Jim Cornelius.

“We’re glad that because of the Canadian government, as well as many individual Canadians, the Foodgrains Bank is able to be present and respond in the face of so much suffering,” he adds.

The Rohingya are descendants of Muslims who came to Myanmar generations ago. They speak a different language and are of a different religion than the majority of Myanmar’s citizens, who are Buddhist. The Myanmar government considers them stateless, and places restrictions on their rights as citizens.

Violence broke out in the northern Rakhine state at the end of August when Rohingya militants attacked government forces. According to the United Nations, the Myanmar government responded against the Rohingya with disproportionate violence.

Entire villages have been destroyed, and there has been widespread panic and flight.

“The Rohingya people have experienced incredible trauma in recent weeks as they flee from Myanmar,” says Ken Kim, chair of the Foodgrains Bank board of directors, and director of disaster response at World Renew.

“The accounts of those interviewed are harrowing. Many have walked for over ten days with nothing in search of safety in Bangladesh. They are exhausted, hungry and in desperate need of basic support.”

“We are continuing to monitor the situation of the Rohingya refugees closely, to see if there is an additional response needed,” says Cornelius.

“We are pleased that our members have come together to provide a joint coordinated response.”

To learn more or make a donation to the Rohingya appeal, visit https://foodgrainsbank.ca/donate-now/