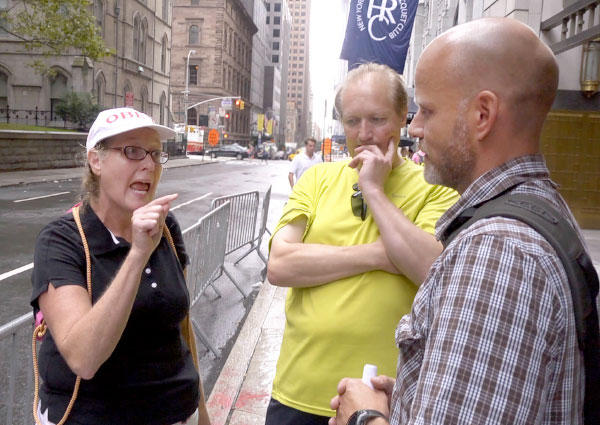 Kevin Miller had no idea hell would become a hot topic when he began to work on Hellbound? – a documentary exploring biblical perspectives on hell. This subject of his lifelong curiosity exploded in popular interest with the 2011 release of Rob Bell’s Love Wins. Screenwriter, director, producer, and author Miller takes a refreshing look at the question of eternal punishment through his documentary.

May 31–June 2, Lendrum MB Church, Edmonton, hosted Kevin Miller for a weekend of discussion about Hellbound? (now available on DVD). Miller’s thought-provoking work provides a great starting point for discussions and further research into the topic of hell. He shared with Lendrum about his own journey of creating this movie – a journey that began after he came to faith as a child and began to wonder about the fate of his family members, who were not practising Christians at the time.

By engaging with a wide variety of personalities and perspectives, the film introduces the viewer to two polar Christian views on hell. The film presents interviews of more than two dozen people, introducing the viewer to many who have long been in conversation on this topic.

On the one hand, a “traditional” view understands the Bible to teach that hell is a place of eternal conscious torment for those who have not accepted God’s offer of forgiveness through Jesus. This spectrum of beliefs on hell is represented by groups and individuals such as Mark Driscoll, Kevin DeYoung, John Piper, and the controversial Westboro Baptist Church.

Another view, represented by individuals such as Brian McLaren, Brad Jersak, and Robin Parry, sees the Bible as ultimately pointing to universal reconciliation and restoration. Subscribers to this view live in the hope that all will eventually be saved through the work of Jesus. The voices who affirm this hope urge the viewer to read the Bible with a better understanding of its purpose, especially with regards to passages that seem to be talking about hell. What perspective and intent did the biblical authors have when speaking about hell?

The film seeks to present some of the many Christian perspectives on the issue of hell, creating space for the audience to carefully consider the options and their implications for our lives. What fruits do our beliefs bear in our lives? Does our understanding of the Bible’s teaching on hell and eternity empower us to live in hope?

The documentary has been criticized for lumping together all those who hold to the traditional view on hell with extremist groups such as Westboro Baptist Church. However, by including the shocking public demonstrations of Westboro Baptist Church in his film, Miller effectively asks what kind of impact our beliefs can have. How does our perception of hell affect how we understand who God is and how we relate to others? Is Westboro Baptist an extreme example?

Though I’ve never carried around placards stating my beliefs that many of my friends will go to hell, I have thought this and acted on it. As a former adherent to the “traditional” view, I saw many of my friends as projects to convert, rather than people whom I loved and cared about. As Miller’s documentary portrays the actions of Westboro Baptist Church members, maybe we will pay attention to our own actions and the fruit they bear.

Well worth viewing, Hellbound? offers a fantastic starting point from which to explore this topic. Miller’s movie can help Christians who are grappling with the concept of hell. Along with the documentary, the film’s website (hellboundthemovie.com) offers an abundance of resources on the subject for further study and reflection.

—Adrienne Lloyd, whose home church is Lendrum MB Church, is a graduate student in Christian studies at Regent College, Vancouver. She also holds a master of music.

Christians and Muslims gather for dialogue, fellowship and...