What's New
A FOCUS on Mission
Must Patience Be So Slow?
Harold Jantz: A Heart for the Mennonite Story
Lorlie Barkman: A Life of Creative Engagement
Last Days, First Days
Women in Ministry: Bertha Dyck
January Moment in Prayer “Holy Spirit—Fill Us!”
The Church as the Patient Body of Christ
Advent: Making Much of Jesus: Christmas Day
Advent: Making Much of Jesus: Fourth Advent
Home News Caring Canadian inspires others 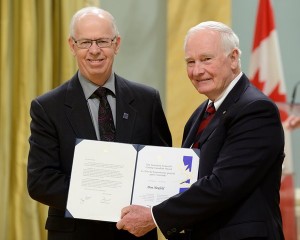 Don Neufeld may look the part of an accountant, bespectacled and proper, but forget the stereotypes of stinginess. The member of Lendrum MB Church, Edmonton received the Governor General’s Caring Canadian Award Apr. 14, 2015, during National Volunteer Week, in honour of his “significant, sustained, unpaid contribution to his community” through Habitat for Humanity Edmonton.

“The matter-of-fact way in which Don does his volunteer work reminds me of Jesus,” says Lendrum pastor Carol Penner.

Neufeld has volunteered full-time in accounting and IT with the charitable organization since his retirement from the office of the auditor general of Alberta in 1998. From serving one family a year before Neufeld started his volunteer work, Habitat served 81 in 2013.

This is not the first time Neufeld’s nearly 16,000 volunteer hours have been recognized. He was honoured by the institute of chartered accountants of Alberta in 2009 and 2014, by the Rotary Club of Edmonton Glenora in 2008, and he received the Queen’s Diamond Jubilee medal in 2012.

In 2013, Habitat for Humanity Edmonton bequeathed his name on Neufeld Landing, Habitat’s largest project in Canada, set to house 64 families.

“People like Don show us by example [that community work is work for the kingdom of God],” Penner says. “They foster that spirit of caring and engagement in the community. They’re an inspiration to a younger generation of Christians who wonder how God is calling them to be faithful.”