What's New
A FOCUS on Mission
Must Patience Be So Slow?
Harold Jantz: A Heart for the Mennonite Story
Lorlie Barkman: A Life of Creative Engagement
Last Days, First Days
Women in Ministry: Bertha Dyck
January Moment in Prayer “Holy Spirit—Fill Us!”
The Church as the Patient Body of Christ
Advent: Making Much of Jesus: Christmas Day
Advent: Making Much of Jesus: Fourth Advent
Home News Christians and Muslims gather for dialogue, fellowship and food

Christians and Muslims gather for dialogue, fellowship and food 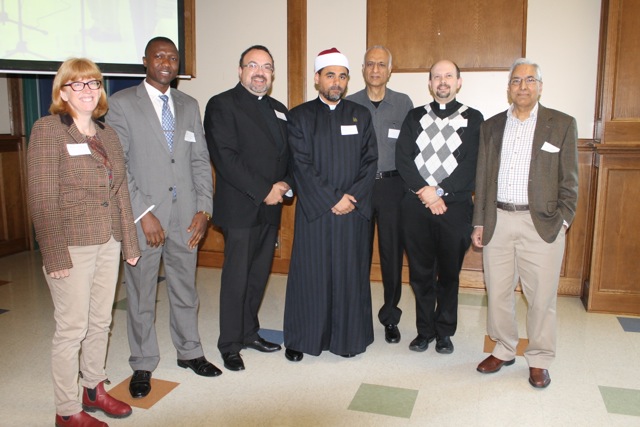 Clerical collars and hijabs, men and women, black and white – the diversity in the crowd of more than 200 was clearly visible. Just as obvious, however, was the palpable presence of God as the crowd listened intently to both Christian and Muslim speakers share about the importance of faith to both private and corporate life today.

“Practising faith in a secular society” brought Mennonite and Catholic Christians together with Shia and Sunni Muslims at the Edmonton Islamic Academy on Sept. 13, 2014, for dialogue and fellowship over abundant food.

Donna Entz, hired part-time by Mennonite Church Alberta to minister to Muslims and newcomers in North Edmonton, was one of the key organizers of the event. She believes dialogues like this are important to the Mennonite church.

“We need to take the respect we’ve learned in service [through organizations like Mennonite Central Committee] and take it into equal friendships with other faiths as a way of moving to the place where Jesus expects us to be,” Entz says; “to heal and verbalize the message of the kingdom, to get people excited about who Jesus is.”

Masood Peracha, chair of the Edmonton Council of Muslim Communities, stated the purpose for the dialogue in his address: “May peace be upon you all…. Today enhances awareness and understanding between two of the large faiths in this city.”

He went on to explain how the Muslim community is often painted with stereotypes including promoting terrorism, oppressing women and stifling free speech. “Nothing could be further from the truth,” Peracha said, adding that dialogue between faith groups helps to break down the stereotypes and foster relationships that go beyond tolerance to friendship and cooperation. 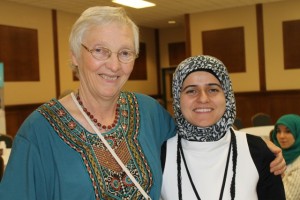 (l-r) Donna Entz, with Mennonite Church Alberta’s North Edmonton Ministry, poses with Asia Wehbi who does communications work with Edmonton’s Al-Rashid mosque. The two worked together to help organize and publicize the Christian-Muslim dialogue held on Sept. 13. Wehbi worked hard on the website; acwalberta.ca. The website outlines the history and hopes for Christian-Muslim friendship in Alberta and around the world.

Kevin Kraglund, president of the Edmonton and District Council of Churches, spoke of the need for interfaith dialogue as having particular importance for today’s society. “The religious landscape is shifting beneath our feet,” he said. “In the 1950s, many Christians did not know someone from another faith. Now Jews, Christians and Muslims live as neighbours.”

He emphasized a need for faith groups to share their beliefs with each other and the world with an attitude of gentleness and reverence, seeking to “count conversations, not conversions.”

A spirit of gentleness, respect and devotion to God permeated all 12 addresses and conversations around the tables. A common theme was the importance of the active living out of faith through acts of love and service to neighbours and community.

Penner gave a brief explanation of what it is to be a Mennonite, noting that Mennonites strive to witness to Christ by following the example of Jesus, who washed his disciples’ feet.

Bumbeh told a personal story of effective witness to an employer through commitment to being in church on Sunday. He is currently appreciating getting to know his Muslim co-workers and learning that they have much in common.

Gross commented on the importance of faith expressed through habit, lifestyle and a willingness to engage in sharing about faith when people ask. “Actions are only effective if we can communicate well,” she said. 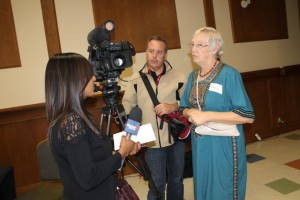 Julien Hammond, coordinator of ecumenical and interreligious relations for the Catholic Archdiocese of Edmonton, believes in the importance of developing strong interfaith understanding and friendship. “We are blessed here in Edmonton to have the [Edmonton District Council of Churches] and the [Edmonton Council of Muslim Communities]. When something happens in one of our communities, we call each other,” he said. “When a rock gets thrown at a mosque window, or a swastika gets painted on a synagogue, or some graffiti gets painted on a church, [we stand together],” Hammond said. “The idea is that the communities aren’t strangers to each other. We call each other to stand together to denounce violence.”

At the close of the event, Mennonites in the crowd were invited to the front to sing the hymn “For We Are Strangers No More.” The lyrics summed up the gracious mood of the dialogue, ending with the line; “Strangers no more, we’re sisters and we’re brothers now.”

Discovering the Son of God: Spirit and truth

I respect this way of improving inter-religional relationships.

“Throughout the event, both Christian and Muslim speakers affirmed common belief in the one God who calls all faithful people to love one another and the world.”

“The idea is that the communities aren’t strangers to each other. We call each other to stand together to denounce violence.” . . . “Strangers no more, we’re sisters and we’re brothers now.”

Christians who believe in the Son of God do not share “common belief” with those whose god, “Allah,” emphatically has no son. Christians who believe in Christ and him crucified do not share “common belief” with those who think Jesus was removed from the cross and someone else died in his place. Christians and Muslims, and friendly as they might be, are not spiritual sisters and brothers.

This kind of ecumenism is dishonouring to the true and living God, misleading for Christians, and of no value to Muslims who cannot be saved unless they bow before the crucified and risen Lord Jesus Christ, the Son of God. It is a travesty that such an article should be featured in the Mennonite Brethren Herald.

I am saddened to find an article like this on the MB Herald website. I believe that this is a reflection of where we are at as a culture though today: Embracing all things multicultural and diverse, in the name of tolerance and understanding.
I do want to say that it is a blessing we live in a culture that is still free, where people are allowed to believe what they will. Having said that, allowing others to believe what they will and saying they are brothers and sisters is vastly different. Canada is certainly a multi-cultural society now and I do not want to harken back to some golden age of Canada’s history, but let us not be misled to think that this in any way condones agreeing with those who do not believe Jesus to be the Son of God, the atoning sacrifice for our sins and the only way to the Father.
In teaching our youth over the past couple of years Christian apologetics, we looked at these exact things (that are celebrated in the article): Ecumenical movement and interfaith movement.
Do we as MBs, and broader as born-again Christians, truly understand what other “faiths” believe? The ecumenical and interfaith movements are a dangerous, slippery slope. Are we more interested in finding what we have in common with Muslims and Catholics and embracing that, than seeking to point them to Christ, evangelizing them, calling them to repentance and faith in our God and Saviour, Jesus Christ?
I wonder, was prayer offered up at this time of fellowship, food and dialogue? If so, to whom? Who prayed? Allah is not the God of the Bible. Can we as Christians embrace that? Is Jesus smiling on us and saying Amen to our thinking that we can truly fellowship and break bread (in the truest, spiritual sense) with those who hate our only Lord and Saviour? Can we really say that they are our brothers and sisters? In the grand scheme, yes, we are all humans, created in God’s image. And yet, we are brothers and sisters really with those who are a part of the family of God, whose names are written in the Lamb’s Book of Life.
There will indeed be diversity in heaven (some 30,000 a day in China come to Christ and another 34,000 in Latin America and many in the Middle East!), but not the kind of diversity presented in this article:
“And they sang a new song:
“You are worthy to take the scroll and to open its seals, because you were slain, and with your blood you purchased men for God from every tribe and language and people and nation.”” Revelation 5:9
I love the truth that Jesus died for my sins, and not only for mine, but for the sins of the whole world! This is the Gospel, this is our calling, to make disciples of the nations by speaking truth. This is how people are being saved:
“faith comes from hearing the message, and the message is heard through the word of Christ.” Rom. 10:17
As MBs and sons and daughters of the King, let’s embrace the call to make disciples by proclaiming Jesus as Lord and pointing them to the Saviour!

I am shocked to read this article on this website for all the reasons given in the above comments. I now have serious questions and doubts about the MB movement.

Seeing this article breaks my heart… Is this how Christ commanded us to live? By denying His sovereignty in spiritual communion with unbelievers? Where is our heart as Mennonites? In tolerance? Or are we truly devoted to the One who gave His life for us?