What's New
Through the conflict, life carries on in Ukraine
A FOCUS on Mission
Must Patience Be So Slow?
Harold Jantz: A Heart for the Mennonite Story
Lorlie Barkman: A Life of Creative Engagement
Last Days, First Days
Women in Ministry: Bertha Dyck
January Moment in Prayer “Holy Spirit—Fill Us!”
The Church as the Patient Body of Christ
Advent: Making Much of Jesus: Christmas Day
Home Life & Faithfeature articles Faithfulness in an unfinished miracle

Faithfulness in an unfinished miracle 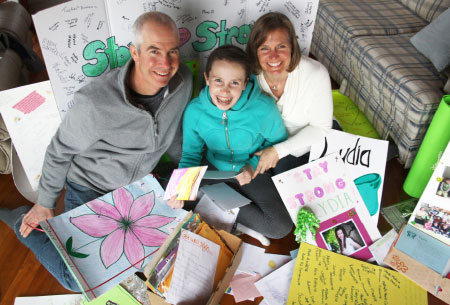 Every night before bed, James and Michelle Herrle pray with their sons Sam and Ben that their daughter and sister Lydia will be healed. It’s the same prayer they’ve offered for more than a year.

The Herrle family continues to be shaped in unexpected ways after an accident forced them to hold tight to hope and God’s faithfulness.

Life changed on May 17, 2012. A truck driver, distractedly reaching for a cigarette, hit Lydia Herrle as she got off a school bus near her family’s Waterloo region farm. The impact sent the 13-year-old flying and inflicted serious brain damage that left her in a coma. After weeks in a Toronto children’s hospital, she slowly emerged from the darkness. Now Lydia lives at home, where ongoing therapy has helped her relearn how to walk and speak again.

Facing a long and uncertain recovery, the Herrles are learning how God’s provision unfolds over the long haul when life takes an abrupt and permanent turn toward challenge and heartache.

“It’s been a long journey, and the end is not really in sight,” Michelle says. “When I look back on the year, we have really been supported in some incredible ways.”

In the moments and months since the accident, the Herrles have learned to release control. Brain injuries are too unpredictable to make a timeline for Lydia’s full recovery – if it ever comes. That means loosening their grip on hopes that Lydia will become the same girl she was before the accident. 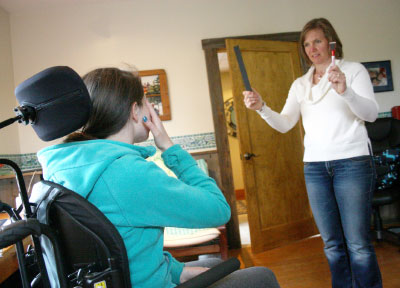 “You’re constantly asking God for what you want. But trusting God is surrender,” Michelle says.

James and Michelle take each day as it arrives. Seeking God’s presence each day and giving thanks in uncontrollable circumstance has been hard. Their faith has sheltered the family through each challenging stage, and God provides strength.

“Our story has been one of hope, right from the start,” James says. “For us as Christians, there’s also the hope beyond recovery.”

The family tries together to remain faithful to the biblical command to be joyful in hope, patient in affliction, and faithful in prayer (Romans 12:12).

“It’s an altering of our hearts,” Michelle says. “By praying, we realized we can’t do this, and put it in God’s hands.” 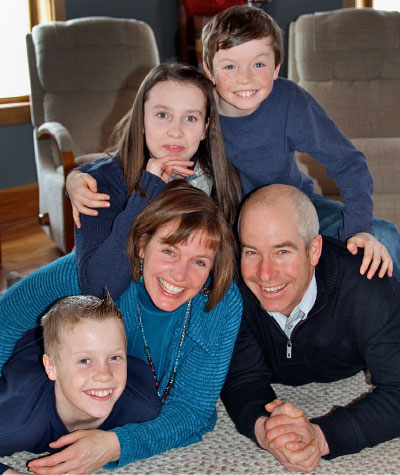 The words of Psalm 27:13–14 have also come alive over the past year, she adds: “I remain confident of this: I will see the goodness of the Lord in the land of the living. Wait for the Lord; be strong and take heart and wait for the Lord.”

Waiting is a necessary part of healing for Lydia’s brain. Every day, the now 14-year-old is making progress and relearning old skills. She works hard to perfect brushing her teeth and regain her  piano-playing technique. Her walk has steadied enough that she can move without assistance, but she still needs constant supervision through the day. And what she really wants now is to run.

As much as her parents wanted a dramatic “rise and walk” moment for their daughter, healing has come one step at a time.

Through the past year, the family has remained faithful in prayer, and the community has followed suit. Since the day of Lydia’s accident, prayers have bloomed around the family and spread through the community. Support quickly expanded far beyond the Herrles’ church family at Waterloo Mennonite Brethren. Ribbons in Lydia’s favourite shade of green were tied to hundreds of trees, lampposts, and car antennas as reminders of the prayers sweeping across the community.

“People say to me, ‘I’m not a praying person, but I’m praying for your daughter,’” Michelle says. “It’s a really humbling thing to have people you don’t really know say they are investing in your family with prayer.”

The family has openly shared their journey through the media and a blog Michelle uses to chronicle their story in writing. Her entries describe endless hospital visits, the excitement and frustration of recovery, and hope and peace found through Scripture and resting in God’s faithfulness. The blog has nearly 1.6 million views, a testament to how Lydia’s story has gripped people across Canada.

The Herrles’ challenges have opened the door to caring conversations with countless strangers, James says. People seem more comfortable opening up to share their own stories and struggles. The family can share how their faith has sustained them, and they have also tried to model forgiveness toward the driver who caused the accident.

Boxes filled with hundreds of cards and letters from well-wishers are stored in the Herrle house. Many are from people who never met Lydia but have been touched by her journey. And Waterloo MB Church has been unified in support through the early crisis moments and the ongoing challenges.

“It really was overwhelming how much connection people felt. For a period of time, we felt like Lydia was our community’s daughter,” James says.

But Lydia’s brain and body are not the same, and she continues to work with therapists to improve her speech, movements, and memory. She wants to rejoin her peers in school, but her cognitive ability and concentration are not yet ready. Progress comes in small steps.

“As much as she’s recovered extraordinarily, she’s not the same girl,” James says.

“It’s a lot like we’ve been given a new daughter,” Michelle says.

But a matching shift has occurred in her parents and brothers, who also aren’t the same. James says walking this road with Lydia has revealed a new type of beauty in his daughter, a beauty different from what the world considers valuable. “We’re being constantly transformed.”

Some days, seeing the blessings within their family’s journey is a struggle. Other times, the Herrle’s recovering daughter is a revelation. In the earlier stages of her injury, Lydia had a serenity and child-like faith that amazed her parents. “Do you know Jesus?” she would ask anyone without reservation. Her simple, loving prayers, spoken alone in her room, sounded like a personal conversation with God.

“There were moments when both of us felt we were on holy ground,” James says. “It drew us in more than we could have imagined.”

Lydia’s improvement can be a slow, day-by-day process. But the therapists who have watched her progress since last summer say her recovery has moved faster than any they’ve ever seen.

“We feel so blessed because we’ve had a front-row seat to a miracle,” James says. “I’m keenly aware that we’ve been given a second chance with Lydia.”

For now, Lydia continues exercising and working toward a day when she can run smoothly again. Her family has released their future into God’s hands. And green ribbons still wave around the region, reminders of a community united by prayer.

—Scott Cressman is a journalist and a member of Glencairn MB Church in Kitchener, Ont.

Watch a video of Lydia giving a graduation speech here.

The man in the soup bowl