What's New
A FOCUS on Mission
Must Patience Be So Slow?
Harold Jantz: A Heart for the Mennonite Story
Lorlie Barkman: A Life of Creative Engagement
Last Days, First Days
Women in Ministry: Bertha Dyck
January Moment in Prayer “Holy Spirit—Fill Us!”
The Church as the Patient Body of Christ
Advent: Making Much of Jesus: Christmas Day
Advent: Making Much of Jesus: Fourth Advent
Home News Enemies become gospel friends 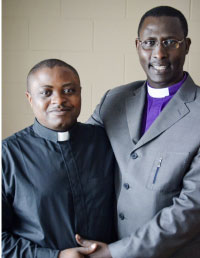 If they weren’t studying together at Canadian Mennonite University in Winnipeg, Theo Muthumwa and Shadrack Mutabazi would be adversaries.

The two men are pastors from the Democratic Republic of Congo. Both survived ethnic violence and traumatic civil war in their homeland, followed by years of exile elsewhere in the region. Both came to Canada as immigrants. Both study Peace and Conflict Transformation Studies (PACTS) at CMU.

However, Muthumwa is part of the Bantu majority from the eastern Congo, while Mutabazi is from the Banyamulenge minority. Their peoples have a history of mistrust and war against one another.

“Banyamulenge in eastern Congo have a reputation of being people who bring trouble,” says Muthumwa. “If we didn’t talk,…I would think [Mutabazi] is my enemy.”

Instead, the two are working toward peace and reconciliation between their peoples.

Their paths first crossed during an introductory PACTS course at CMU. Through classroom discussions, their ethnic identities were revealed. As they shared more stories, they became close friends.

“We are now telling [our] stories,” Muthumwa says.

Muthumwa says the two have a mission to promote peace and reconciliation because the Bible instructs them to do so in Matthew 9.

Both came to CMU to study theology, but they found PACTS inspiring.

Ultimately, it’s equipping them to work out their beliefs.

After arriving in Canada as immigrants in the late 2000s, both felt unable to speak about their past. Mutabazi once stopped attending classes for a week after a lecturer’s stories of ethnic genocide triggered his own memories and left him in shock.

“These are deep, deep wounds,” says Mutabazi, who lost his parents to horrific violence. He says facing the future requires truly understanding the past.

“CMU is helping us speak of where we have come from, where we are now – digging for knowledge and learning – and planning now for our future to go and meet survivors and help bring them together for reconciliation.”

As ministers, both have planted churches in Congo, in exile, and now, in Canada.

Mutabazi started Shalom Christian Outreach and Muthumwa founded Philadelphia Miracle. Both Winnipeg congregations serve immigrants from Africa and other parts of the world and Canadian citizens.

Bringing unity to their people is a difficult process, but Mutabazi and Muthumwa believe that telling their story is crucial to finding unity and forgiveness. They have watched young people create space through music.

“(In Congo), people are using the youth for fighting. Let us use our youth and our leaders to have a dialogue,” Mutabazi says.

Congolese youth from across congregations formed a band that regularly plays at Congolese church services and events across the city, bringing together communities that otherwise have little contact.

“Our goal is not to end here; it is to also go back home. We have so many spiritual leaders not aware of peace,” Muthumwa says.

After seeing the potential significance of their work for the greater African community, Mutabazi and Muthumwa started Reconciliation Initiatives and Healing for African People.

“We believe that leaders are servants of God who can be ambassadors of reconciliation to bring people together,” Mutabazi adds.

“The studies we got from CMU are a bridge,” Muthumwa says. “We want to start first with those Congolese here, to create a sense of dialogue, and to create also dialogue in Africa.”

From listening to helping

They also look with hope to the greater Winnipeg community.

“Most people here, we’ve found, are listeners,” says Muthumwa, “but we want them to go to the next step.”

“Your grandparents came to Canada, and they struggled. We are also facing these kinds of struggles – being in a new place, no family, no one to show you what to do. We need people to welcome us.”

—Matthew Veith is a graduate of the communications program at Canadian Mennonite University.