What's New
Through the conflict, life carries on in Ukraine
A FOCUS on Mission
Must Patience Be So Slow?
Harold Jantz: A Heart for the Mennonite Story
Lorlie Barkman: A Life of Creative Engagement
Last Days, First Days
Women in Ministry: Bertha Dyck
January Moment in Prayer “Holy Spirit—Fill Us!”
The Church as the Patient Body of Christ
Advent: Making Much of Jesus: Christmas Day
Home MB HeraldFeatures Dream cake and star shine 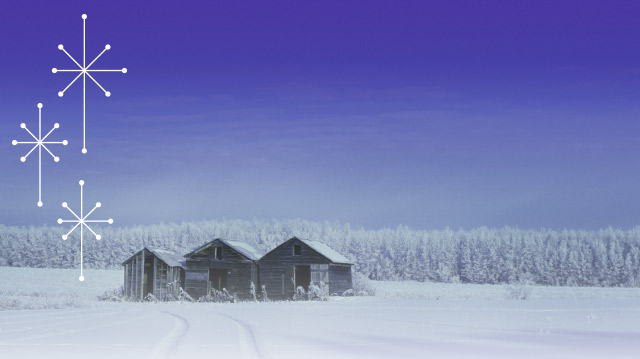 All Blaine Lake children looked forward to Christmas with great anticipation, just as children did in faraway Russia. Granted, it took very little at any time to overwhelm children born to parents living in this new climate and culture in the 1930s:

We stood amazed at the hoarfrost-covered trees on the way to school in the morning.

We listened eagerly for the jangle of sleigh bells on a horse-drawn cutter.

We relished our first taste of Dream Cake, a wonderful concoction of shortbread and nuts liberally covered with icing and only served in homes with income.

Next in line to near-heavenly experiences was the taste of Philadelphia cream cheese with bits of pineapple. It came in a tiny jar, and only entered our home because the lid had loosened and Dad couldn’t sell it.

Equally unforgettable were the sight and sounds of the North Saskatchewan River breaking up in spring, ice floes madly crashing against one another as they rushed to Hudson Bay.

But Christmas was different. The season was so packed full of star shine and unrestrained joy – despite the meager economy – that the magic power of hope was sprinkled on everyone, rich or poor. An aura of peace and goodwill toward all mankind hovered over the struggling community for a little while, lifting it out of despair.

The citizens, mostly immigrants in a new environment, moved closer to one another for spiritual warmth even as they shivered in buildings not built to withstand severe Canadian temperatures. All Depression children knew what Christmas was about, even if they didn’t have the right words to talk about the incarnation of  the Christ child.

Without Christmas, life in those difficult days would have been a perennial, arid emptiness.

Katie Funk Wiebe has written for the church for more than 60 years, publishing 2,000 articles, columns and reviews, and writing/editing some 20 books. She lives in Wichita, Kan., and blogs at KFWiebe.blogspot.com.