What's New
A FOCUS on Mission
Must Patience Be So Slow?
Harold Jantz: A Heart for the Mennonite Story
Lorlie Barkman: A Life of Creative Engagement
Last Days, First Days
Women in Ministry: Bertha Dyck
January Moment in Prayer “Holy Spirit—Fill Us!”
The Church as the Patient Body of Christ
Advent: Making Much of Jesus: Christmas Day
Advent: Making Much of Jesus: Fourth Advent
Home Arts & Culture Compassion moved by justice and love

Compassion moved by justice and love 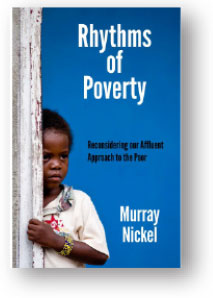 “The best laid plans of mice and men often go awry.”  Robert Burns originated this oft-repeated saying in the 18th–century. As with any famous adage, this quote has stuck around because it’s true. However, when these “best laid plans” involve the good news of Christ, they shouldn’t go awry…should they?

This is the frustration Canadian MD Murray Nickel expresses in his book, Rhythms of Poverty. Drawing on years of living and working internationally (mainly in DR Congo), he discusses the disappointment that accompanies failed attempts to help. He leverages his experience to illustrate how “clumsy but well meaning” affluent, Western individuals and organizations have tried to alleviate poverty – yet the issue has not gone away; if anything it has gotten worse.

Nickel suggests that truly making a difference requires completely redefining our concept of compassion into one based on Jesus’ response when asked about the greatest commandment: “Love the Lord your God…and love your neighbour” (Matthew 22:38–39).

Nickel’s subsequent discussion is the strength of the book. He discusses how, by fully embracing a love for God expressed in a love for our neighbours, our compassion will grow from simple pity (what he calls “fleeting compassion”) to the type of lifestyle described in Micah 6:8: “He has shown you, O mortal, what is good. And what does the Lord require of you? To act justly and to love mercy and to walk humbly with your God.”

True compassion, according to Nickel, resonates with the virtues described in this verse: justice, mercy and humility.

This true compassion is not necessarily expressed in the establishment of missions, hospitals, churches or other institutions and organizations. Though most of the established missional institutions and services were built on great vision and desperate need, Nickel argues that all too often the original vision erodes. This leaves staff focused more on maintaining the institution than actually serving the people who needed it. Compassion, he says, must be rooted in relationship with those who are poor as we learn from each other in real, honest partnership.

That said, I struggled with Nickel’s noticeably cynical – at times bordering on judgmental – tone toward the work of NGOs and mission agencies in the developing world. His experience illustrates primarily his frustration with the mission methods of those who have gone before him. To that end, I wish he would have focused more energy on building a model of effective ministry than on deconstructing what he judges to be ineffective models.

In the final chapters, Nickel begins to work toward this type of a model. However, his argument would have been stronger if he had focused on how he and others have applied his model of ministry with proven, positive results. Rather than doing so, he cites examples where others have not applied a particular principle or value, and highlights the negative results that they experienced.

Nickel’s overall perspective echoes recent trends in missiology – trends popularized through books like When Helping Hurts and Toxic Charity, among others. Specifically, mission that is the result of wealthy Christians trying to “do good” for those who are poor has great potential to do more harm than good. These writers, including Nickel, would all agree that compassionately coming alongside the local church in mission – instead of charitably doing service for locals – is the greater goal for wealthier Christians engaged in global outreach. One would be better served by reading When Helping Hurts, by Steve Corbett and Brian Fikkert. Using both stronger research and easily accessible language, those authors clearly articulate how wealthier North American Christians can support the church globally to change their neighbourhoods more effectively.

The root of poverty is hopelessness, argues Wess Stafford, long-time president of Compassion International. As we engage in helping those who are poor, we need to combat the hopelessness that comes from believing that the situation cannot change. Unfortunately, Rhythms of Poverty is written in a manner that leaves the reader with the impression all our attempts to help are unlikely to make a difference.

In the end, however, Nickel presents his readers with a new definition of compassion. Compassion that does not simply improve circumstances or access to assistance, but sets transformation as a goal for those in poverty. A compelling vision based in a love for God and for our neighbour, characterized by humbly coming alongside as co-labourers working for justice and mercy. One that doesn’t seek to implant our ways on others but to support what people are already doing in their own neighbourhoods and communities.

This vision is the greatest challenge for us all as we allow God to transform our lives – and work with him to see others’ lives transformed as well.

—Brent Esau is director at Southridge Shelter, an emergency shelter operated by Southridge Community Church. Brent and Carmen live in Niagara with their three children.