What's New
Through the conflict, life carries on in Ukraine
A FOCUS on Mission
Must Patience Be So Slow?
Harold Jantz: A Heart for the Mennonite Story
Lorlie Barkman: A Life of Creative Engagement
Last Days, First Days
Women in Ministry: Bertha Dyck
January Moment in Prayer “Holy Spirit—Fill Us!”
The Church as the Patient Body of Christ
Advent: Making Much of Jesus: Christmas Day
Home Life & Faithfeature articles Come and pray 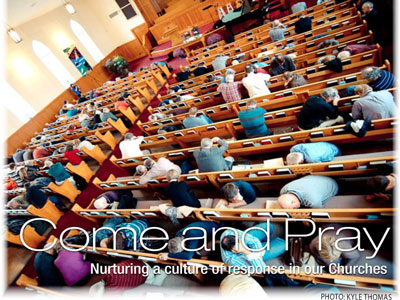 Nurturing a culture of response in our churches

Jesus concluded his Sermon on the Mount with a reminder not only to hear his words, but to put them into practice (Matthew 7:24–27). Jesus expected people to respond to his teaching by taking concrete action. The apostles carried on this expectation in their ministry, illustrated by the crowd’s response to the apostles’ teaching at Pentecost: “Brothers, what shall we do?” (Acts 2:37); and in James’ instruction: “Do not merely listen to the word…. Do what it says” (James 1:22).

As pastors, these verses have gripped our hearts as we preach and teach today’s church.

Our question is this: Do we still expect a response today? When we gather for corporate worship, do we expect the Holy Spirit to be present to work in people’s lives? As God’s Word is proclaimed, do we invite hearers to take action?

Ultimately, true faithfulness is demonstrated as the church takes action and goes out into the community. But this fruitfulness can be encouraged by nurturing a culture of response when the church is gathered.

At Mountain View Community (MB) Church, Fresno, Cal., we’ve spent years trying to sort out how to cultivate response. Our focus has been on two main forms. The first is on prayer – communicating whatever needs the church family might have. The second is on action inspired by Sunday’s message.

Almost from the start, we implemented the practice of having “prayer ushers” available at the front of the sanctuary or off to the sides during corporate worship. These trained lay ministers are ready to pray with the congregation regarding any issue that might be front-and-centre in their minds. We pray for marriages, healing, jobs, victory over sin, and more.

We, Dave and Fred, both grew up at Willingdon (MB) Church in Burnaby, B.C., where this type of prayer response has been practiced for years with much success. When we started our Sunday morning prayer at Mountain View, we expected there would be a lineup, just like at Willingdon. But that wasn’t the case. Only after years of faithful, weekly practice, a culture of response through prayer became an accepted part of our church’s fabric.

These days, if the prayer ushers don’t know the person who comes for prayer, they ask a few diagnostic questions – we’ve discovered that some people’s greatest need is actually for salvation! One morning, a couple came forward to pray about a marital issue. It quickly became clear they weren’t followers of Jesus. The ushers encouraged the couple to consider this as a first step. At the end of the service, they responded to the offer of salvation, came to know Jesus, had their marital issues prayed through, and left as different people.

Get up and take action

The response we call for at the conclusion of our services has two components. First, we invite people to salvation – every week, every service. The theme of the message doesn’t really matter. Recently, we’ve been preaching through Zechariah and people have responded to salvation as we’ve talked about the justice or God, the authority of God, and the victory of God. If we’re faithful to call for a response each week, God brings people who don’t know him, and the Holy Spirit does the work in their hearts.

This isn’t just about numbers for us. We invite people to raise their hands for salvation and then, after the service, we ask prayer ushers to sit with them and pray through the commitment process. This typically takes at least 30 minutes. We put a variety of spiritual growth resources into the inquirer’s hands, collect contact information, and follow up individually.

The second response at the conclusion of our services is for believers to immediately take action based on what they’ve heard. We typically invite people to come the front – we call it “the altar” – to kneel and pray about what the Holy Spirit has specifically called them to do. Sometimes a handful of people respond; sometimes it’s a crowd. Like the rest of our prayer ministry, inviting people to come forward at the end of the service didn’t take off quickly. It began as a purposeful habit, was cultivated over many years, and has now produced an environment of natural response.

At a conference several years ago, pastor and teacher Wayne Cordeiro shared these wise words: “If you don’t invite people to respond in some concrete way at the end of your message, you’re teaching them it’s OK to hear the Word of God and do nothing.” May we avoid this trap, and be churches full of hearers and doers.

We faced a similar challenge in our church in Ontario. We found it fairly quick to create this culture in our alternate service with those under 40, much more challenging with those in the 40-65 range. But we also saw fruit in both places. Of course other “cultural” challenges are equally great – like turning religious consumers into people who understand themselves as “sent.”